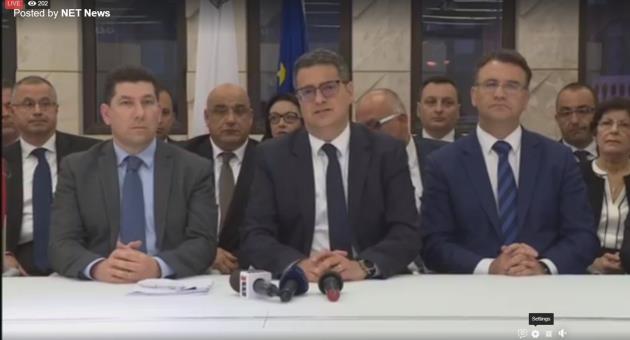 I haven’t seen the original interview on Smash TV; just this summary of it on The Malta Independent. But I can’t fault anything in what Alfred Sant is being quoted as saying.

He focused his attention on the Parliamentary Opposition because that is what he was talking about. He may or may not agree with me that it is far from the only institution designed to keep the government in check that is failing us.

Just because the lament has been repeated before we cannot look away from the fact that our police has been turned into an armed branch of the Labour Party; that judges are being selected and promoted as a gift of partisan policy; that the prosecutor has delegated his discretion at law to the will and interest of the prime minister.

The list goes on: planning has become a misnomer and environmental sustainability has been ranked beneath alchemy; financial regulators are overseeing the transformation of a financial services hub into a den of thieves; take your pick.

The functioning of our democracy requires the organs of the state to operate in opposition to the executive, snapping at its excesses and punishing illegalities.

Because saying we are a democracy is not enough. If that’s all we were we’d gather in the streets and decide whether to pay taxes and save the drowning and feed the poor by the showing of hands. And I don’t think we’d be paying taxes or saving the drowning or feeding the poor if that’s how we decided things. We’d be even more like Lord of the Flies than we already are.

This is not just a democracy. This is a republic: based on rules and laws that apply to all, even those enjoying popular support.

The institution in our republic with the most explicit responsibility to oppose the government is the Parliamentary Opposition. It is not expected even to be objective, neutral, or balanced. Its job is to seek out the loopholes, point out the fly, throw light on the bad news and provide the public with an alternative. It needs to be bad to be good. It needs to be negative to affirmatively fulfil its vocation.

Alfred Sant does not buy into the official line of the government that a critical opposition is ‘negative’. But the Opposition does.

He also makes a valid point the blame for which cannot be laid solely on the present administration of the PN. The Opposition party looks like it lacks human resources. For anyone to decide to vote PN when they hadn’t before — assuming people would do so for the right reasons — they will want to look beyond the qualities of the party leader.

Doubts about those qualities abound but the issue is bigger than he is. People will need to decide that the PN’s offer for Finance Minister or Health Minister or Education Minister, and so on, is more appealing than the incumbents.

As Alistair Campbell recently said of the present UK Labour Party, the PN should be having a field day. Labour is grossly overrated in government. Its policies are unimaginative, its economic performance relies on the decimation of the environment and the rape and plunder of our international reputation, its social conscience is Baroque. So why isn’t the PN shooting through the polls ceiling?

Alfred Sant wonders if capable people would rather make money in business than work within the PN. It’s a good explanation but facile because unless Alfred Sant is acknowledging Labour politicians are in it for the money — perhaps he is — the fact that politics pays poorly should be impacting all parties equally.

There are deeper reasons. The long permanence in government means younger generations are as tainted as the old. Since 2013 the PN has gone through several pogroms decimating its own ranks in order to look untainted. It seems like they haven’t had enough.

Its detachment with its own past, perhaps the process of dispensing with its greatest asset, has had the effect of dismantling the resources the party used to have before new ones could be engaged.

The PN is also ideologically confused, lacks political focus that would make it an obvious place for like-minded people to gravitate to. The PN pursues applause but it hasn’t yet written the speech it wants to deliver.

Can the PN turn itself around and fill the void it is leaving? Does it want to?

All that is secondary. The real question is can we have a democracy if we do not have a choice?