Nickie Vella de Fremeaux is disappointed with how it-Torċa covered their interview with her. She says they trashed a text she approved and published what they wanted. So this morning she published on Facebook her own version of that interview.

The country has bigger fish to fry than the outbursts of Nickie Vella de Fremeaux. We should really be talking about how it seems American investigators have found another money laundering scam involving a bank in Malta and Venezuela. Read about it in today’s The Malta Independent on Sunday. You will recall Ali Sadr, who wants Pilatus Bank back, is indicted in America for laundering money through and for Venezuela. The bank in this new story is so far unnamed. As is the investment company that did the washing.

But the country is named: Malta. Our reputation as the laundrette for tyrants of the world continues to grow. Thanks to Joseph Muscat’s gang.

The Opposition isn’t worried. Instead energies this weekend were spent on an incoherent 4 am rant in uppercase typescript by Nickie Vella de Fremeaux about her son who, according to a later post of hers this time in normal typescript, may or may not have been bullied.

Labour picks it up and Nickie Vella de Fremeaux believes all the likes and the supporting articles and comments are out of sympathy with her. She gets dragged into an interview with it-Torċa who has never had anything good to say about anyone in the PN. And then she’s surprised to find out that they really just wanted to put words in her mouth.

Is this going to happen every time the Leader of the Opposition’s wife feels in the mood of speaking to the nation? Are we going to have a small crisis every time? A rant, followed by another rant to disavow the first one, followed by a sympathetic barrage from labour, and ending with a denial?

And in the meantime, after a week-long storm over something that may or may not have happened and that should have remained completely in the private realm if it did, the Leader of the Opposition says absolutely nothing about anything and sits in his office sweating off his embarrassment. Is this how it’s going to be all the time? 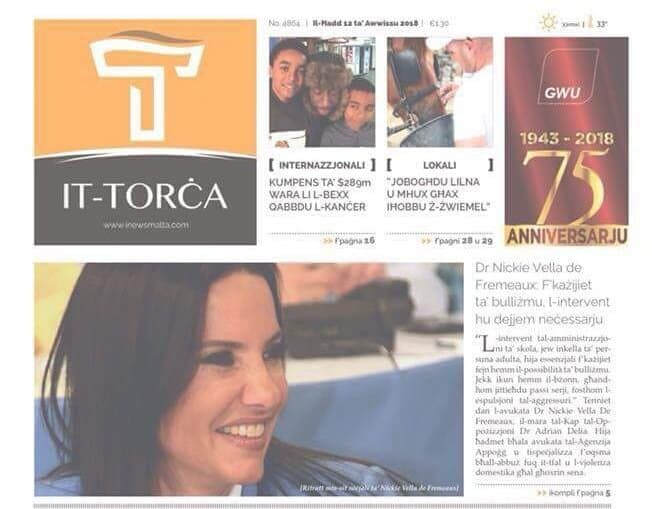 Previous:A Borg-Cardona: To the bullies out there
Next:Venezuela oil company: the common factor between Ali Sadr’s scam and fresh Malta money laundering scandal