Lizzie Eldridge: Serenity, what a joke.

This is Lizzie Eldridge’s speech at yesterday’s vigil. 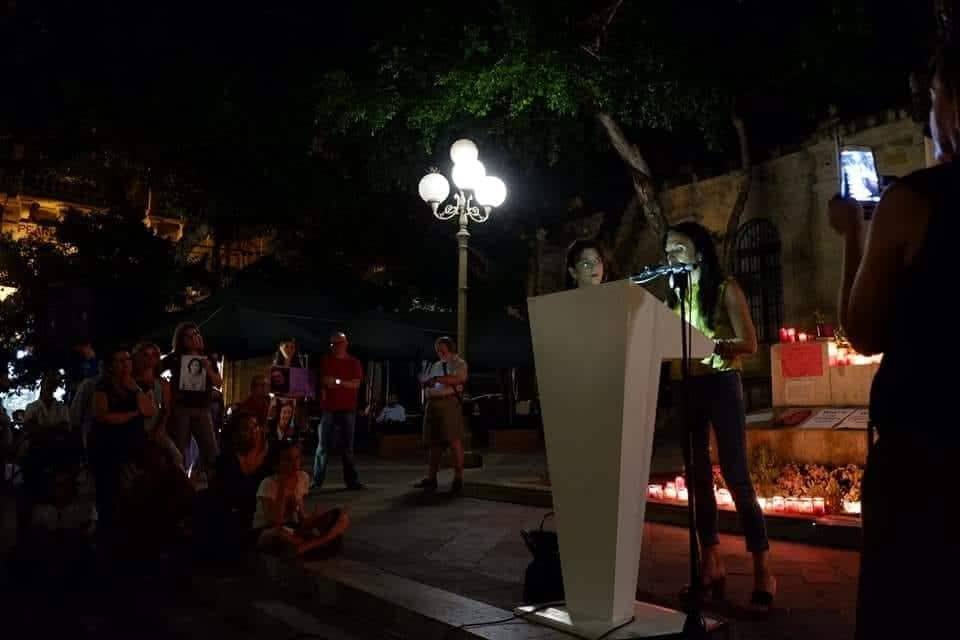 It is 10 months since the brutal assassination of Daphne Caruana Galizia. It is 10 months since she was brutally murdered. And if we had to detail every single thing that’s happened since she was killed, it would fill a million books. And these books would be incredible. Unbelievable. People would read them and think they weren’t true. But they are. They are the bizarre chronicles of a demonic Wonderland in which the Looking Glass is distorted beyond all sense of belief.

Serenity is the word Joseph Muscat uses. Serenity – to describe a land that’s steeped in blood, corruption, lies and death.

The list of obscenities is endless. Infinite. Too many to mention. So let’s pause for a moment and focus on the Egrant inquiry. I’d like to say this is the pinnacle of ‘Serenity’ but, unfortunately, this government is never afraid to go even lower than the lowest lows. Things can’t get any worse? In Serenity, oh yes, they can!

Egrant – or what could be described as ‘the biggest political lie in Maltese history’. Whitewash? Hogwash. Bullshit at its finest. A textbook illustration of a propaganda machine in full swing. George Orwell’s 1984  on acid.

A magisterial inquiry overseen by the very subject of this inquiry – El Duce Joseph Muscat himself! A magisterial inquiry that, as we are proudly told, cost millions of euros of taxpayers’ money while the subject of this inquiry and his money-laundering cronies are laughing all the way to Pilatus Bank! An inquiry which, like everything in Serenity, is sewn up and stitched up, and then waved in the air as a totally false proclamation of innocence.

Serenity…What a joke! What a sick sick joke – made even sicker by Michelle Miskina Muscat. How her children suffered! How her family wept! All those sleepless nights on extortionate holidays to Dubai, trips to Azerbaijan, whisking the kids out of school for a quick jaunt to Buckingham Palace! And after all, where Egrant’s concerned, it would only take a 2 minute Skype call to Karl Cini to clear up the matter. You’d think he’d be first on the list, wouldn’t you?

But not in Serenity! Oh, no! For in Serenity, nothing is ever as it seems.

Except that it is. Lies are lies. Corruption is corruption. No matter how much spin they put on this, the truth is there. And it is always there. And it will never ever go away.

It’s an upside-down world we’re living in, isn’t it? Where corruption has been normalised, where known money launderers, Keith Schembri and Konrad Mizzi, walk safely through the tax haven halls of Castille, where people who expose the truth are intimidated, threatened, and interrogated by the police or sent death threats in the form of social hate memes  – Jonathan Ferris, Maria Efimova, Simon Busuttil and his partner, Kristina Chetcuti, David Casa, Manuel Delia. And, most sickeningly of all, the Caruana Galizia family themselves.

What this government, this populist dictatorship of Malta is doing is adhering to the rules of governing by tyranny. It’s textbook stuff, straight out of the pages of George Orwell’s 1984 (and I quote):

‘If one is to rule, and to continue ruling, one must be able to dislocate the sense of reality.’

This is Muscat’s ‘Serenity’. And it is obscene. He talks of Serenity amidst lies, murder, fraud and chaos, in a land where not satisfied with killing journalists, they also allow horses to die, they kill birds, and they massacre trees. Muscat talks of the triumph of the Egrant Inquiry and that lie is repeated until it appears as fact. Medieval words such as ‘treason’ and ‘perjury’ and ‘slander’ are bandied about so that seeking the truth becomes a crime against the state.

But I’ll leave you with other words from Orwell because these remind us that it is them, and not us, who are mad:

‘Being in a minority, even a minority of one, did not make you mad. There was truth and there was untruth, and if you clung to the truth even against the whole world, you were not mad.’

We, in our rightful search for justice, truth and the basic fundamental things that make us human, we see right through what this ‘Serenity’ is. It is our humanity, our integrity and our sanity which stand as testament to this. 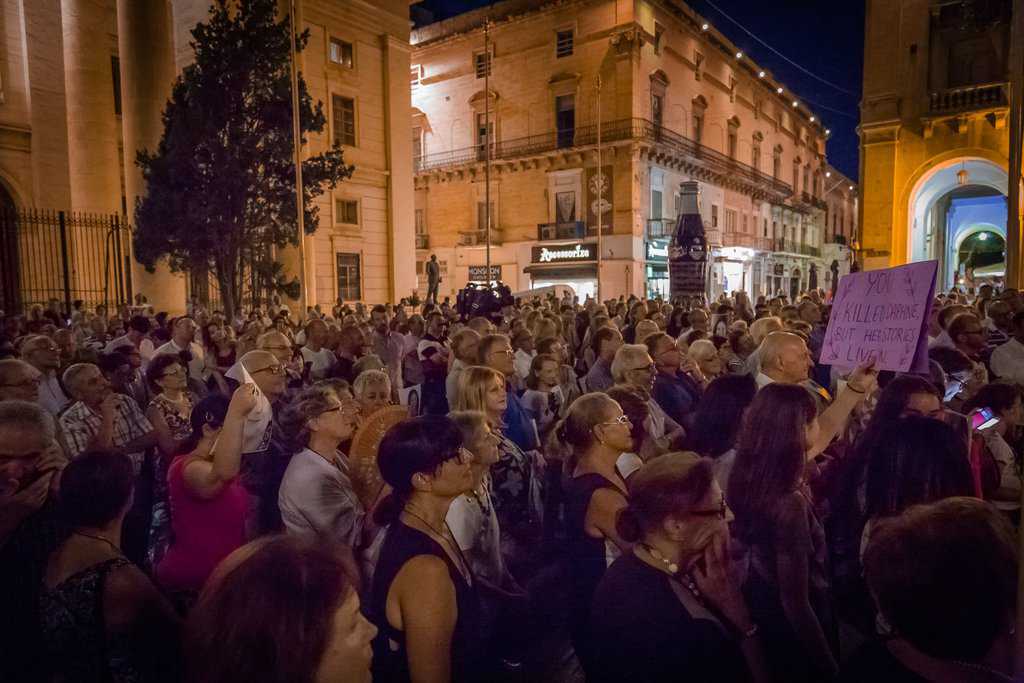 Previous:Matthew, Andrew and Paul Caruana Galizia: message to August vigil for truth and justice
Next:Jessica Debattista: Daphne was an artist