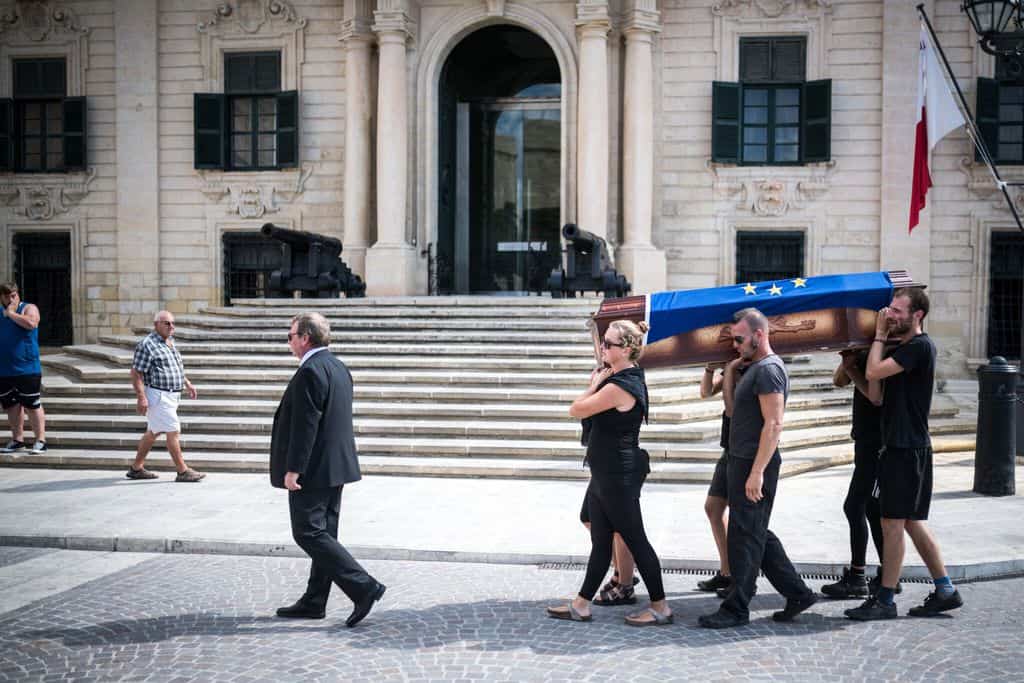 The action in Valletta today by activists in the NGOs who want to save migrants from drowning in the Mediterranean gets to the heart of the matter.

Malta’s government are using the law to reach political ends, in the process breaching the most important law of all: the obligation of the state to safeguard the right to life. Sometimes Malta’s government is going beyond the law in order to perpetrate this abuse.

The fact that the Italian government is lowering the standards of decency in democratic life below anything seen since 1945 is no excuse.

I’ll give a few examples we’re being made aware of.

The NGOs own a plane which is parked in our airfield to fly over the Mediterranean and help spot vessels in distress and migrants in danger of drowning. With that knowledge, it could help inform authorities or other NGOs of the location of lives in peril improving the chance of saving them.

This website is informed the Civil Aviation authorities are only authorising the plane to fly northwards. There appears to be no legal basis to forbid it from flying southwards and yet that is what they are doing.

NGO ships have been stuck in the harbour for weeks without a permit to leave the harbour. They are told if they do try to leave they will not be stopped but if ever they ask for permission to come back they will be denied entry on the grounds that they had disobeyed orders in the past.

Of course, while these boats are in here, who knows how many are drowning out there.

The small picture here is that the government’s administrative abuse breaches the rights of the owners of the plane or the operators of the salvage boat. That’s the small picture.

The big picture is that the government’s administrative abuse has the, clearly intended, consequence of causing people to drown.

This is a breach of fundamental human rights. Because, though many often forget, the state’s obligation is to protect all human life, not merely that of its citizens. That, in the balance of considerations between saving the lives of migrants and appeasing the complaints of citizens, the former remains an over-riding consideration.

One thousand five hundred people are believed to have drowned in the waters around us since January. The small picture is they would be on land if they did not try to make the journey. The big picture is we save lives first, ask questions later. Or at least that is what basic decency requires of us.

If you no longer stick to basic decency, you might as well bury the law. And those NGOs this morning celebrated its funeral.

Their statement is reproduced below. 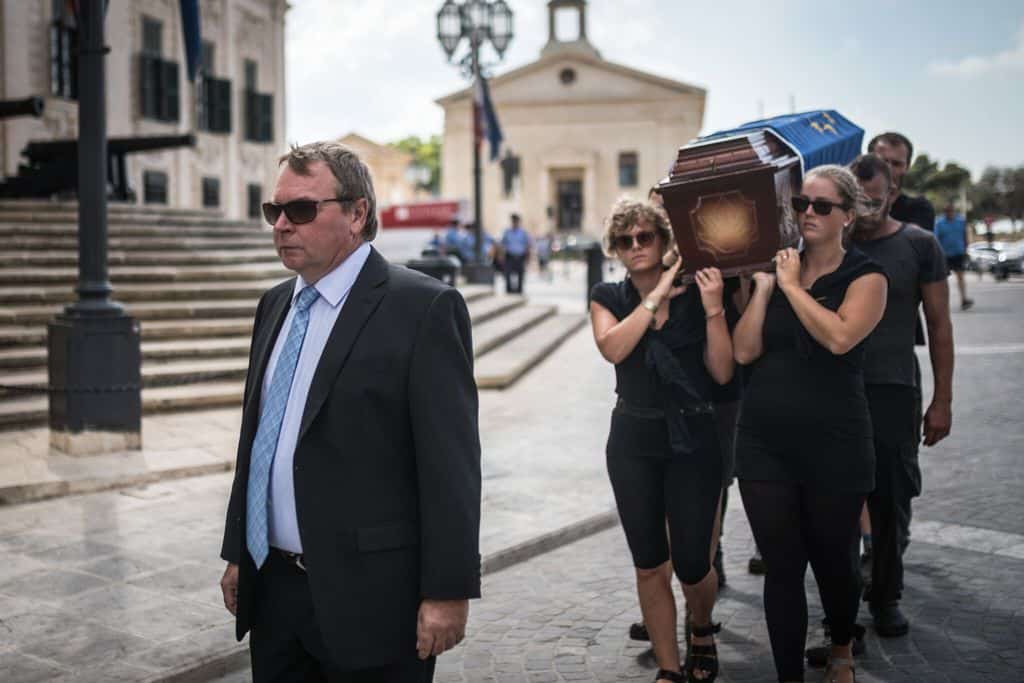 At today’s trial of the LIFELINE’s captain, activists held a funeral march through Valetta and symbolically buried European human rights in a coffin. Today marks almost two months of disgraceful behaviour by Malta and other European states, which is costing more lives every day.

Captain Claus-Peter Reisch of MISSION LIFELINE saved 235 lives during a rescue mission in the Mediterranean Sea and is now being accused of doing so without a correct registration of the ship. Previous investigations have failed to support this claim, and we contest this attack as shameless political scapegoating in response to sea rescue NGOs highlighting failures in the EU’s migration priorities and policies. It is evident that Malta is attempting to make an example of the LIFELINE, to keep NGOs from rescuing.

Another clear indication of this strategy is the fact that the Sea-Watch 3 and the reconnaissance airplane Moonbird are also still being detained on Malta without any legal grounds. In doing so, the Maltese government is leaving people to drown in the Mediterranean Sea and is responsible for every death that occurs while rescue NGOs remain chained in its ports.

“Nobody would stop the fire brigade from extinguishing a fire on land because someone thinks that maybe the license plate could be the wrong one.” says Captain Pia Klemp of the Sea-Watch 3.

“Captain Reisch did what everybody else would do and what is his moral and legal duty – he did not stand by while people were drowning in front of him. While European politicians have looked the other way for years now, we demand nothing but to follow the most basic principle that human dignity and the equal value of life are inviolable.”

We held this funeral to mark the death of human rights in Malta. This one funeral is merely a drop in the ocean compared to over 1500 deaths that have occured in the Mediterranean since January, of those fleeing in search of safety. 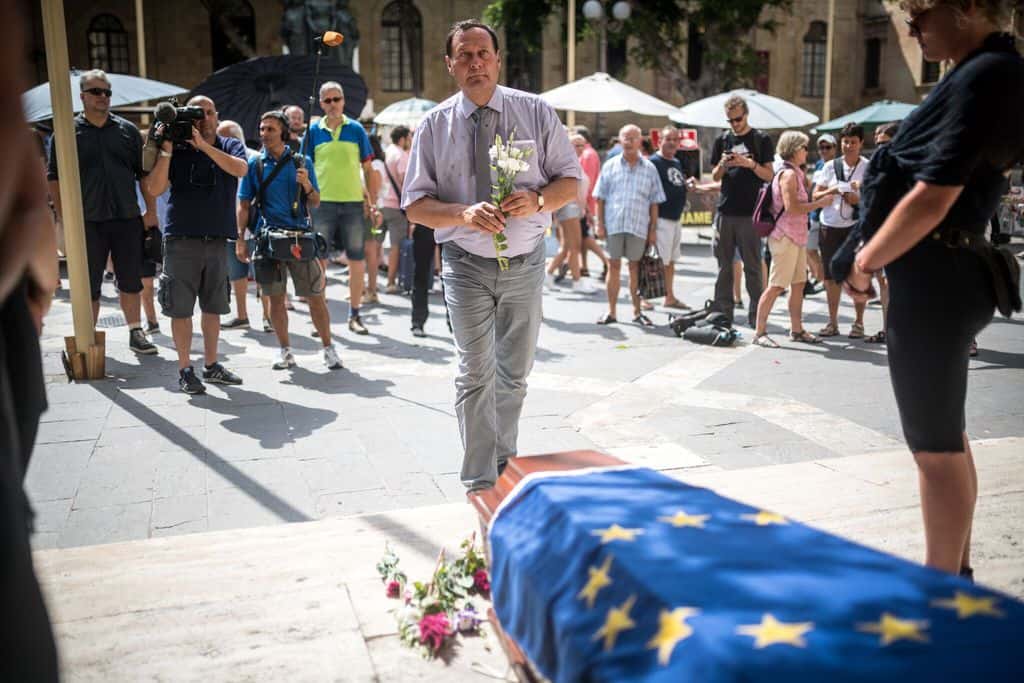 Previous:Has the government looked into security risk of hooking to Huawei 5G?
Next:Karl Cini interrogated by the police. And this is not 2016.