Winston Psaila: Above all she had guts

This is Winston Psaila’s speech at yesterday’s vigil: 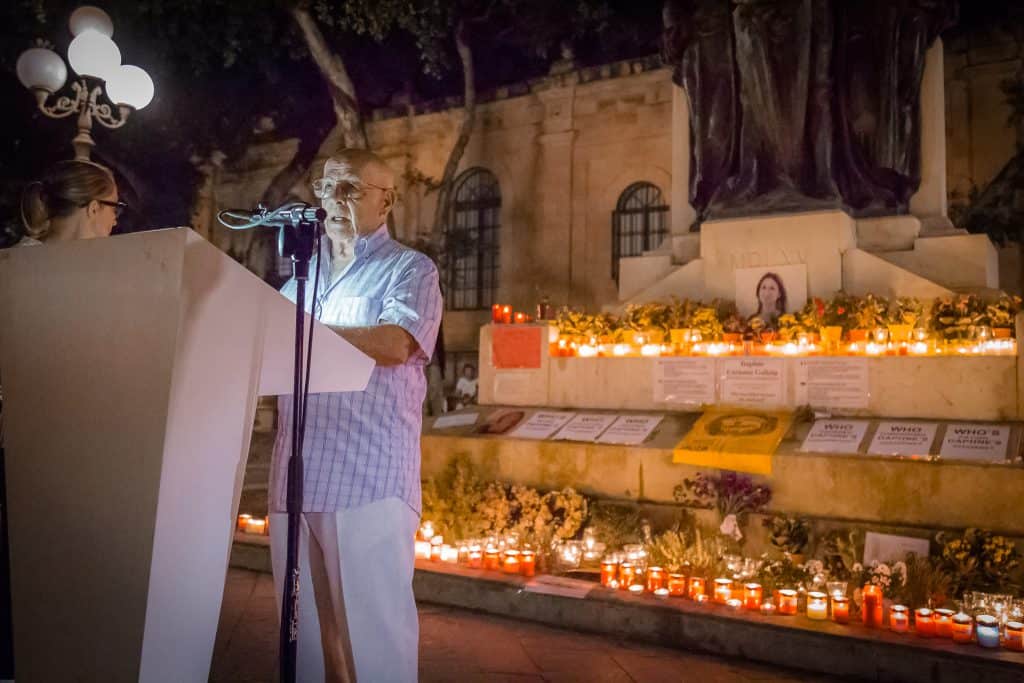 I would like to say something about hope and illusions.

For as long as I can remember, it was drummed into us that hope springs eternal. It’s the last thing to die because it’s the only butterfly we managed to trap in Pandora’s box.

I have never been able to figure out what to make of such an apparently simple statement. Is it a declaration of faith making us believe that, no matter what, truth will prevail? Or is it supposed to be a panacea for complacency, an advocate for lethargy and laziness, something which provides us with a light at the end of the tunnel telling us that everything will be all right, everything will work out very well, with no effort on our part?

Wish life were that easy.

Men of action do – they do not hope, neither do they dream, or hide behind illusions. The SAS is a crack military unit who operate under the mantra that ‘who dares wins’ –- and invariably they do,

‘Once more unto the breach, dear friends’ is what got Henry V, France, against all odds, and not debauching and boozing with Falstaff and his mates inside the tavern.

He who sups with the devil should have a long spoon because what floats at the top of the cauldron is very enticing but very different from what lies at the bottom.

I suppose you are all familiar with the tragedy of Dr Faustus.

When Faustus was presented with Helen, he was mesmerised. Here was the most beautiful woman in the world and what’s more, she was his for the taking.

‘Is this the face that launched a thousand ships/And burnt the topless towers of Illium?/Come Helen make me immortal with a kiss,’ exclaimed Dr Faustus when he saw the alluring, seductive, incomparable beauty of Helen, only to find when the spell was over and the deal with Mephistopheles had run its course, that the tantalising illusion was no more. He had been shagging a fetid decomposed skeleton covered in millions of worms encompassed by a thin sheen of fake beauty.

Our own homegrown Mephistopheles from up the road fares much cheaper because while his lieutenants chase their Helens in Acapulco or in sundry other lap-dancing joints and live off our taxes to pursue their extravagant pastimes, the hoi polloi are easily seduced with a donut and a bottle of wine, or perhaps with the payment of a couple of water and electricity bills or for tougher negotiators a job for which they will not have to report.

We have been blessed with the works of so many poets, writers, dramatists — Shakespeare, Dante, Ibsen, Chekov and hundreds others. They have willed us an inheritance which makes us the supreme masters of creation. We have shed oceans of sweat struggling with their teachings, not to apply them to upgrade our nature and well-being but only to reproduce portions of their masterpieces in essays and impressive papers to get in return ‘karti ta’ l-incċva’, and instead, like lambs to the slaughter, we flock behind drivel who would change this once gem of an island to one that reeks of mediocrity, shame and unbridled corruption such as we had never known before. At least, sometimes, we do manage to get it right and then enjoy 25 years of serenity.

So who killed Daphne?

I did. You did. Our collective lethargy and laziness did –- always finding it ever so convenient when something needs to be done, to let others do it for us.

And didn’t Daphne comply beautifully? Well, we would say, she had ‘a world-wide net of international spies aiding her and working for her, and blessed with so good a pen; and such a beautiful play with words; her prose was just impeccable.

But above all she had guts. And we had nothing but fear. We, or maybe I should address the ones at home watching TV with their ACs and fans on –- because you know how it is; it’s too hot to go out in August – they cannot even be arsed to come and give a few minutes in exchange for decades of work that this woman who sacrificed a family and a life for us gave us.

And they would have valid reasons for their absence too: they have a job to think about; a family to protect; there’s nothing they can do about it – anything but owning up to indifference or fear.

Fear. There we go again. By now you must have heard it about a thousand times:

Or if, like me, you prefer the original from the Master himself:

‘Cowards die many times before their deaths. The valiant never taste of death but once’.

Recently, a friend of mind – I still have a few left. The others who are gone no longer invite me to their parties and quite frankly, I don’t know how I’m coping with the depression I’m under. But that’s another story. He expressed the view that it’s ok for me to be so vocal because I’m retired and my son is safely settled abroad but at the same time intimated that I must be bonkers to wage war on these scum saying ‘having lived through the 70s and 80s aren’t you scared?’

Too true I am. Indeed terrified. If it weren’t so awfully embarrassing, I would be walking around wetting my pants. At my age, I should be at home totally relaxed, sitting in my rocking chair, with a glass of whisky in one hand and the TV remote in the other watching a juicy movie bringing back flashbacks of saucier days. Fear transfigures into one of two things: submission or defiance. There’s a beautiful French poem by Alfred de Vigny called ‘the death of the wolf’ – La mort du loup — which speaks of the stoicism of a wolf facing death when upon being cornered by a pack of hounds, he turns into a formidable fighter.

Now I ask you, ‘Aren’t we similarly cornered?’

I would like to read to you the very poignant ending of a post by Ryan Murdoch – a writer who also lived for a good number of years here and quite in tune with our psyche. He also for a brief period of time before she was assassinated shared views with Daphne. It goes:

‘There’s no hope for change on a local level; too many people are benefitting from the state of things in Malta. The only hope will come from outside: from a weak and indecisive European Union, or in the form of sanctions from the world’s major economic players.’

But none of this will happen. Daphne will have died in vain, fighting for what she believed in, writing her truth and fearlessly signing her name to it.

At least she could look herself in the mirror each day. I don’t know how the rest of Malta can.

And perhaps one last remark from me:

This to the present generation because to borrow a quote from that great musical Cabaret, ‘Tomorrow belongs to you’:

I have been lucky to see the political departure of six prime ministers. It is not likely that I shall see the back of this lot but Hope does spring eternal and sometimes a light will appear at the end of the tunnel but when it does you must venture out to reach for it and not expect it to come to you. You must persevere in the search for truth forcing it out from every nook and cranny that crooks would strive to stifle it in.

For the benefit of those who couldn’t or wouldn’t be here this evening or preferred to go boozing in Gozo even while Malta is burning, I intend to post this on FB hoping that maybe, just maybe one word of this will touch a corner in their heart.

I had contemplated throwing in a few tears for dramatic effect but then I realised that by now you will have had your fill of hypocrisy. 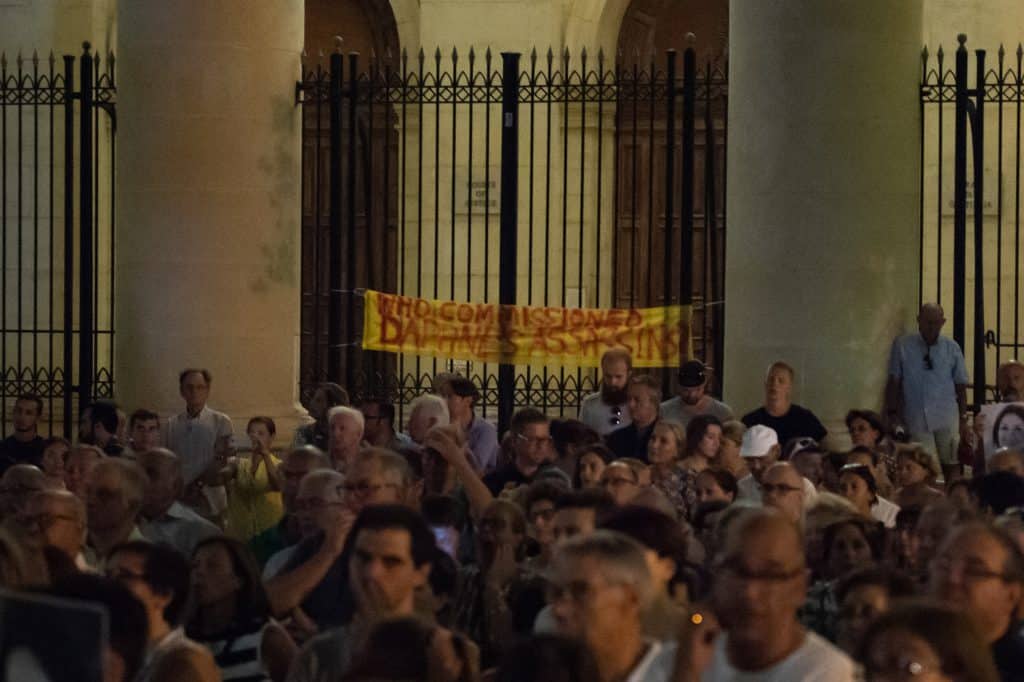 Previous:More images from yesterday’s vigil
Next:Simon Busuttil on EU Observer: ‘I am one of the few left standing’.