Are you a victim of corruption? 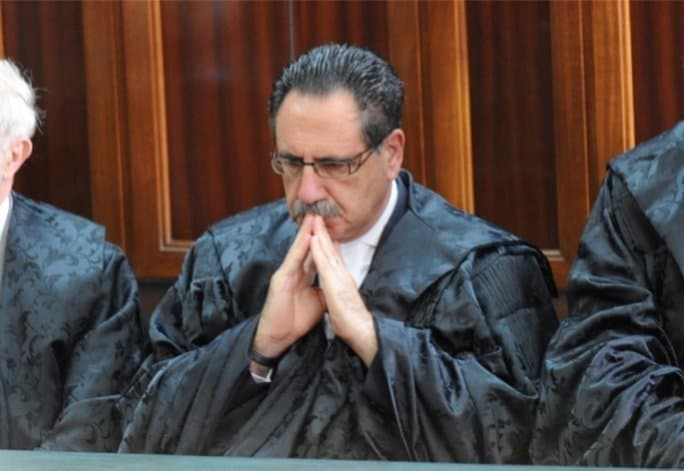 It can be said of any tragedy. It would be funny if it wasn’t just so damn wrong.

Simon Busuttil was told by the Constitutional Court this morning the Attorney General was wrong to say that the safeguards on a fair trial do not apply to the case of the Panama Gang’s appeal from a lower court order to have them investigated.

But he was also told it’s not up to him to make such a claim because only ‘victims’ are entitled to seek the protection of a court to secure these safeguards.

Simon Busuttil is in court more than a year after he left the office of Leader of the Opposition simply out of a sense of personal mission. He’d be the first to say the alleged wrongdoing in Panama is not a personal matter for him.

But if there’s one thing about corruption it is that it hurts us all. Corruption is not like any other crime. You don’t have to show whose blood is on the floor to say you have an interest in corruption being punished. It is not true that corruption is victimless. If Joseph Muscat or Keith Schembri or Konrad Mizzi took backhanders from Azerbaijan in exchange of public contracts and for the protection of money laundering activities here and if they stashed those backhanders in Panama, there are victims of that alleged crime.

The notion that ‘lili ma ħaduli xejn’ is misguided and frankly wrong. Public administrators are obliged to decide without fear or favour because when they decide under the influence of either we spend more to get less.

The constitutional court today ignored this simple fact and the matter will now have to be reviewed by the European Court of Human Rights in Strasbourg. Though their decision will be academic as Antonio Mizzi will have retired by then, the principle is important. We can’t have this notion that only someone who can demonstrate they are a victim of corruption would have the right to ensure in court that their complaint and any appeal by the alleged perpetrators against a decision to receive that complaint is heard by an impartial court. It has to be reviewed by a higher human rights court or we’re left with a very nasty precedent.

There’s the narrow detail that in the meantime Antonio Mizzi has been allowed for now not to recuse himself from hearing this appeal less than a month from his retirement. As for all his career on the bench, it will be up to him to decide on the basis of the law and his conscience no matter the fact that he was asked to recuse himself.

On the foreground of this is Joseph Muscat and his Panama Gang who continue to resist in court the simple order to have the evidence provided by the Panama revelations in 2016 to be investigated. Quite why they would even appeal against this is if they are innocent is already baffling to start with.

But the background of this is the faint hope of securing justice and protection from our courts when we need shelter from the abuse of power by politicians. Will judges stand to protect us when we need them? Will they act independently of government?

Judge for yourself by seeing this post by Labour MEP Marlene Mizzi. She speaks of “Mr Justice Mizzi” like the fact their surname was the same was coincidental as when I speak about the Leader of the Opposition. 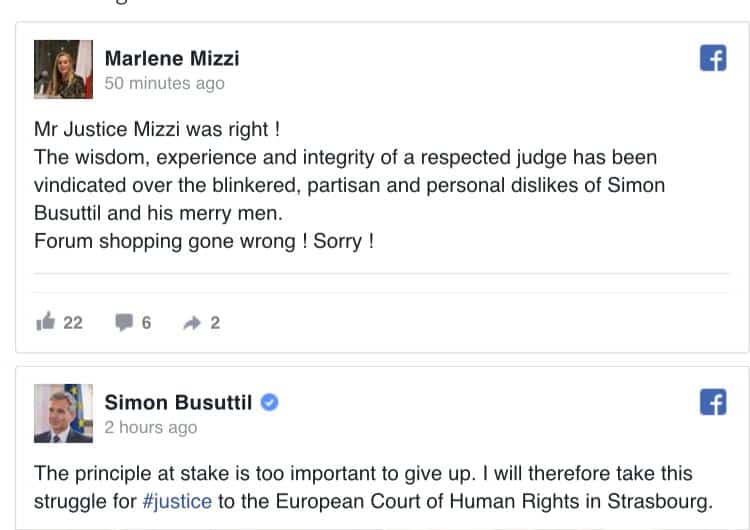 Mr Justice Mizzi is her husband. And the fact she is his wife and she is spiteful and partisan in the matter is the core reason why her husband should have recused himself and the order of the first court to force him to when he refused should have been confirmed by the constitutional court today.

Because Mr Justice Mizzi cannot be seen to be deciding this matter fairly not only when his wife is so politically invested in the outcome of his decision but also when the rest of us can see how gleeful she is when Simon Busuttil does not get his way in court.

Can you imagine her reaction when “Mr Justice Mizzi’ were to decide on the merits of the appeal he is considering? Is she going to say “Mr Justice Mizzi” was right if he decides the lower court was right to order the police to investigate “Mr Joseph Muscat” her political boss?

The court today was not convinced Simon Busuttil is a “victim” of Joseph Muscat’s alleged corruption and therefore ineligible to insist that the person to decide whether to confirm an order for Joseph Muscat to be investigated has no vested interest in the outcome. That decision has made us all victims.

Politicians today can feel even more confident all they need to do to get away with corruption is appointing their spouses as police officers and judges. You and I have no right to complain.

Previous:I don’t have to like it to know it’s right
Next:You’re being watched