BBC: From our own correspondent. John Sweeney.

This is the script of John Sweeney’s From Our Own Correspondent feature on the BBC after he participated in Tuesday’s March for Truth and Justice. 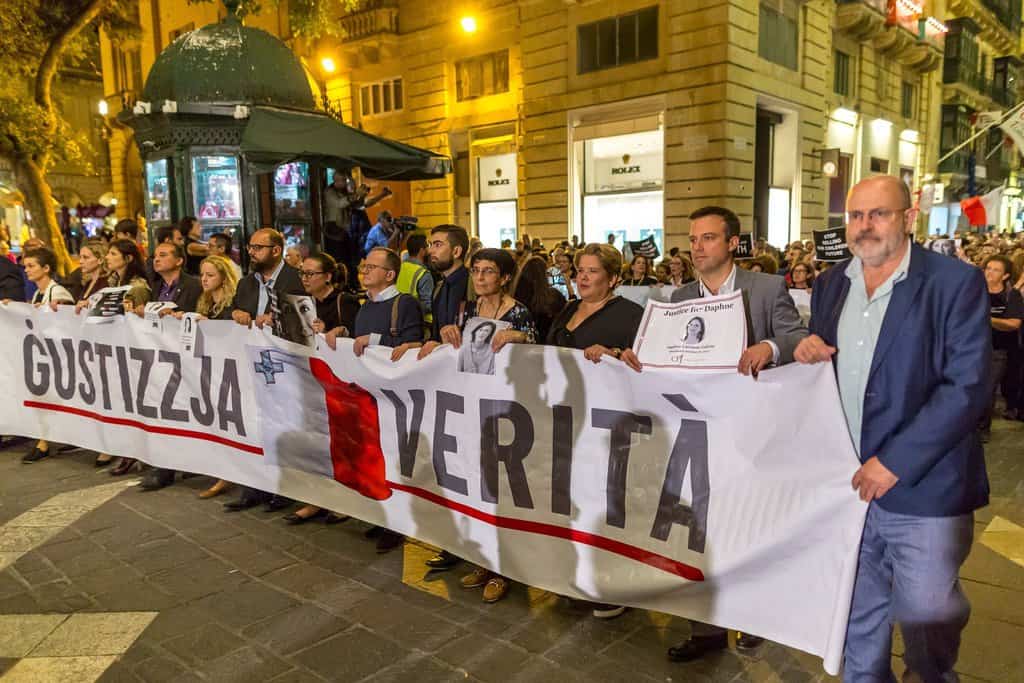 A crowd of seven thousand or so stood in silence in the main street in the capital Valetta, holding their phones up with flashlights on, a very twenty-first-century tribute in an ancient city. The tragedy of the assassination of Daphne Caruana Galizia and the beauty of her island home were perhaps best reflected in the words of Nicholas Montserrat in his novel, The Kappilan of Malta:

Now there was only silence: silence, and peace, and the feeling of history encased in golden stone.

The speeches had gone on too long and I needed a drink.

Malta has a population of 400,000 plus people so it’s fair to say that only a tiny percentage of them turned out to mourn her death this week. On Tuesday night we placed candles and flowers and photographs of her by the country’s most famous statue in honour of the siege of Malta in 1565 when the island held out against the might of the Ottoman Empire.

The steps of the statue became a makeshift shrine to Daphne’s memory. While alive, she had variously alleged that the government of prime minister Joseph Muscat was corrupt, that the prime minister’s wife was the ultimate owner of a company that had received loans from the Azerbaijan presidential family, that Muscat’s economics minister Chris Cardona had visited a brothel and she questioned a fancy Maltese passport-flogging outfit, Henley and Partners.

All concerned deny any wrongdoing.

At the time of her death, she was facing 47 libel actions. In Malta, weirdly, you can still sue the dead so the corpse (and its family) are still facing 30 or so libel suits.

The flowers and candles and photos were laid on the steps on Tuesday night. After the reporters from London and Rome and Tokyo and the representatives of the international free-speech organisations flew home the tributes were cleared away, the shrine to Daphne air-brushed out of existence.

I’ve seen this game played before. It happened at the spot in Moscow where opposition politician Boris Nemtsov was shot dead in 2015. Every night his friends and supporters would put down candles and flowers and photos and then the Kremlin’s binmen came along and destroyed them. Then Nemtsov’s friends would come back. The Nemtsov shrine was dismantled – I think I’ve got this number right – 192 times. And then one day the Kremlin gave up and now lets it stand.

Malta has some catching up to do.

Questions remain about who ordered the hit on Daphne. Three men have been arrested for the murder. They deny the charges. But there has been no progress on who commissioned the hit. Chris Cardona, the economics minister, had reportedly been at a party attended by one of the alleged assassins four months before the killing and was allegedly seen with him in a bar some weeks after the killing.

Cardona denies any recollection of meeting the man.

In April in London outside a Henley and Partners bunfight, I tried to ask the Maltese Prime Minister Joseph Muscat whether he still stands by Chris Cardona, but I got thumped by one of the prime minister’s bodyguards.

All concerned deny any wrongdoing.

In the last twelve months three reporters in Europe have been murdered: Daphne, then Jan Kuciak in Slovakia and very recently Viktoria Marinova in Bulgaria. And then, of course, there is the case of Jamal Khashoggi. I don’t understand the official position of the Kingdom of Saudi Arabia but it seems to be that Khashoggi must have cut off his own head inside their consulate. The Crown Prince, Mohammed Bin Salman, is known as MBS for short but among the suspects, seemingly, there is another MBS, Mr Bone Saw.

Bleak as they are, my thoughts get bleaker yet. In the summer of 2016, I visited the home of one of New York’s great reporters – Wayne Barrett, who was dying of cancer. In his pomp working for the Village Voice in the eighties, Wayne used to report on Donald Trump and his links with the mob, the Gambinos, the Genovese, how Fat Tony Salerno had sold the concrete to Trump for his Tower. What if Trump gets elected, I asked?

My old hero was right. The leader of the free world has demonised journalists time and again and now, the world over, the butcher’s bill is being paid. If you’re a trouble-making reporter, it’s time to be afraid.

Previous:Cold feet
Next:‘Professor Joseph Mifsud’: will he ever show up?