They tried it out on One TV but in Saviour Balzan they find a willing ally. So the eyewitness who told the camera of France 2 he had seen Chris Cardona speak to Alfred Degiorgio before the latter’s arrest has since told the Police he had lied about it.

When do you know that a liar is lying? Is it when he promises he’s saying the truth?

An Italian journalist this week asked me if they could speak to the witness who had spoken to France 2. My first answer was that I did not know who they were and how to get them. My second answer was that I would expect they would be very reluctant to speak again.

And finally, the story in Malta Today reveals the process of retraction. It happened under police interrogation in an investigation that as described in Malta Today itself appears focused on discrediting evidence collected by the Magistrate’s inquiry rather than finding the real answers. 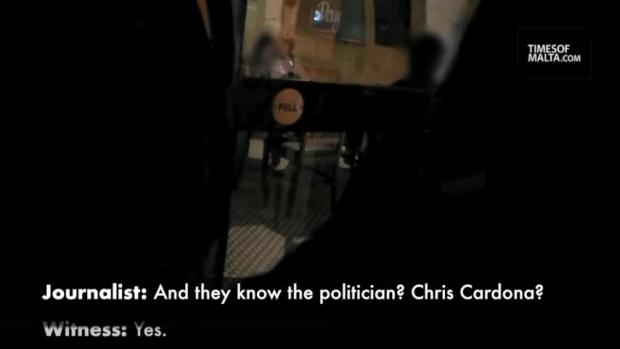 Steve Mallia on The Sunday Times today warns readers from activist-journalism. He does not name me but there’s little room for doubt that he had this website in his sight. He says both the activism and the blogging are an act of hypocrisy that misleads readers into thinking they are reading something approximating the truth.

That may very well be the case. The alternative is, of course, party-owned media that yesterday served us the story of tapes no one has seen that do not show where Chris Cardona was the eve of the arrest of Daphne Caruana Galizia’s murder. Or the other alternative would be Saviour Balzan who in the guise of independence rubbishes a witness who changes his story after the powerful man he names in connection with a murder remains in office 6 months after the story breaks.

Or perhaps there is a third option: a newspaper like Steve Mallia’s used to be when he was the editor at The Sunday Times run by Adrian Hillman then secretly stashing €650,000 paid for by Labour’s factotum Keith Schembri and now made consultant to the government for the salary of a rocket scientist. You could not call out the hypocrisy then because you did not know about it.

The fact of the matter is seeking the truth is a tough job and the multiple and hidden motivations of propagandists who wear the mantle of journalists — sometimes corrupted, often purely enthusiastically motivated to serve a political party — send the public multiple and confusing versions of reality intended practically to cancel each other out.

Here my bias is declared. It is my own. Steve Mallia gives you fair warning about what you might get from this blog. It’s actually a disclaimer that comes with the ‘About Me’ section of this website, rather than something I would want anyone to forget as Steve Mallia suggests.

And in all that confusion what decision would you expect that witness who saw the Minister having a drink with someone who the next day he would hear was arrested for murder to make? To run a futile crusade straight into oblivion? To face a fate worse than other witnesses who came up against the interests of this government, while none of them implicated murder in their statements?

Or would he rather tell the police what they want to hear: that he lied and he can now get on with his life with a little impunity at least as comfortably as Chris Cardona?

Previous:Fearless, relentless, unwavering
Next:BBC: From our own correspondent. John Sweeney.