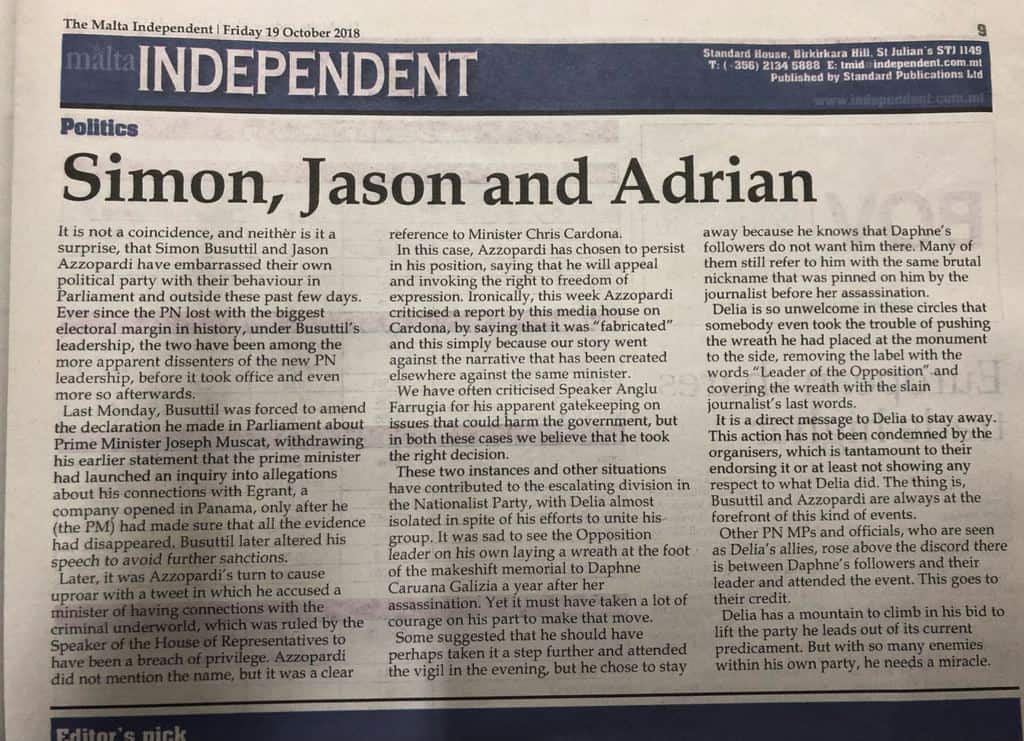 It can be assumed to be a direct line to the thinking of PN Headquarters. Every newspaper has a right to choose its editorial line and it is no better or worse for choosing to disagree with others. Of course, though it complained about remarks made about a story it published last Sunday, it must accept that the line it takes is also subject to comment.

The Simon vs Adrian narrative betrays the siege mentality that continues to pervade in Pieta’. It did not start now. It started on the very first day of Adrian Delia’s tenure as party leader. It is clear his men and he never understood their political interlocutor was Joseph Muscat, not Simon Busuttil. It was Muscat they needed and need to beat. But for people who feel a target is unsurmountable but are unable to admit that to themselves, they go about looking for alternative wins within their reach.

But the pettiness, the small-mindedness, the obtuseness of the people who pass for strategists at the PN comes through in the second half of the editorial.

The Independent covered the great drama of the label “Il-Kap tal-Oppożizzjoni” that was on a wreath Adrian Delia placed at the protest site around 7 hours before the protest march on Tuesday.

The leader presents this gesture as some act of heroism. “It must have taken a lot of courage on his part to make that move”. Why? People have been placing flowers there in defiance of state action and crowd bullying for a year. Why was it so particularly courageous of Adrian Delia to do so this week? Are you sure you don’t mean brazenness?

From adulating him as a hero, the leader goes on to describe him as a victim. “Many of ‘Daphne’s followers’ do not want him there. Many of them still refer to him with the same brutal nickname that was pinned on him by the journalist before her assassination”.

Quite apart from the fact that I’m not exactly sure what nickname they are referring to, can’t the Independent really see that it is again, as if we have learnt nothing from the assassination, presenting the criticised politician as a victim and the journalist criticising him as the aggressor. A nickname is ‘brutal’? A car bomb is, what, a tickle and a laugh?

Perhaps Daphne’s own colleague – she wrote for his newspaper for crying out loud – should read Ranier Fsadni’s arguments yesterday. On how with his barrage on Daphne Caruana Galizia, Adrian Delia helped her killers. By exacerbating her isolation, by legitimising Labour’s dehumanisation campaign against her by giving it the blessing of cross-party consensus, by leading the charge of armies of trolls working for his campaign, by piling vexatious libel suits on the mountain she carried, by dodging her pertinent questions with obfuscation and verbal violence, he contributed to the environment that enabled her murder.

Ranier Fsadni reminds that Adrian Delia’s predecessors, particularly Lawrence Gonzi, were often challenged by Labour to “condemn” Daphne Caruana Galizia when the positions she took were such that distance would have benefited them. Adrian Delia’s predecessors, particularly Lawrence Gonzi, deeply understood the democratic harm of scoring political points at the expense of a journalist. 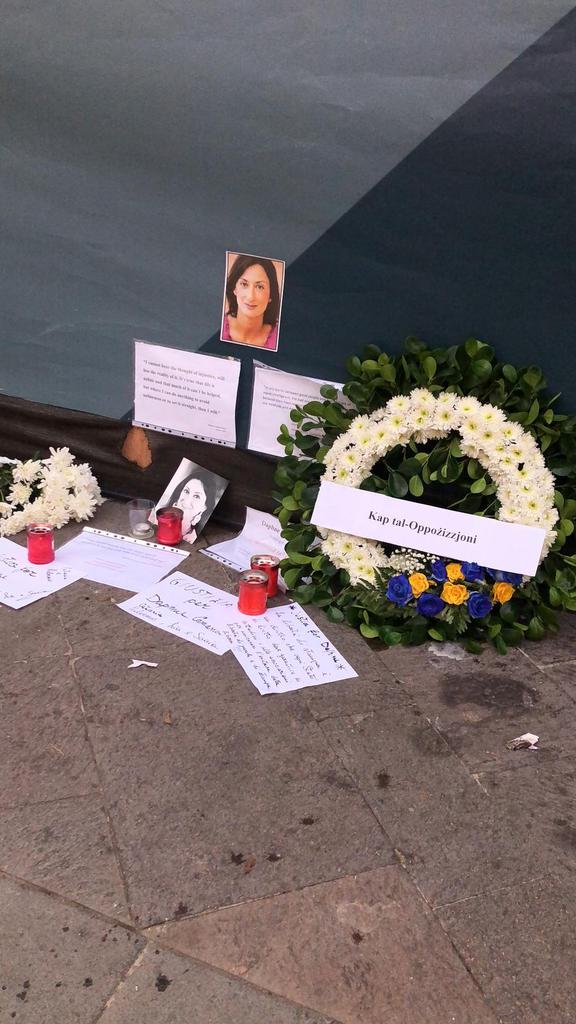 Tuesday’s gesture of laying a wreath may, for all I know, be an expression of his genuine remorse and a sincere desire for atonement. But it does not surprise me that not everyone buys that.

It looks like PN headquarters has realised its crowd is walking down Republic Street so they must now rush to walk in front of it.

I feel no resentment. And I assure the Independent’s editor that my activist friends are completely ambivalent about this. For a year we were happy to do this ignored or mocked by the PN leadership and its media. The reversal of their strategy is not going to affect us either way.

I assure the editor that no activist organising Tuesday’s event was affected one way or another by a wreath bearing the Leader of the Opposition’s title. What he feels is up to him and we do not own the memorial and we do not control who or what is placed at it.

But like Adrian Delia’s predecessors, we will not fall for the trap of being challenged to “condemn” this. He acted in his conscience one would hope and dealing with his conscience is his business. And whoever removed his label after all of us left around 10 at night likely in their conscience too.

The Independent says Adrian “Delia has a mountain to climb in his bid to lift the party he leads out of its current predicament. But with so many enemies within his own party, he needs a miracle”.

I’m quite sure he realised that when he was keeling over for an audience a year ago this week. I’m certain he thought it would be impossible for him to continue in his job having a share of responsibility in creating the political environment that killed a journalist and in giving the government a political alibi for the assassination.

Whether because he had no way out, or his advisers assured him, wrongly as it turned out, that even this would be forgotten and he would be able to ride this out with time, he’s still here now a year later, still waiting for a miracle.

He should have done more than wait. What heroic “courage” is it for him to have waited a year before he could lay flowers at a memorial censored so consistently by government action and supported by his silence and neutrality the whole time?

Where was his courage then? It was being screwed to pounce on the demons in his mind, Simon Busuttil and Jason Azzopardi to start with.

Previous:Rai 24: Report from Malta
Next:We walked into the police station. And then back out again.