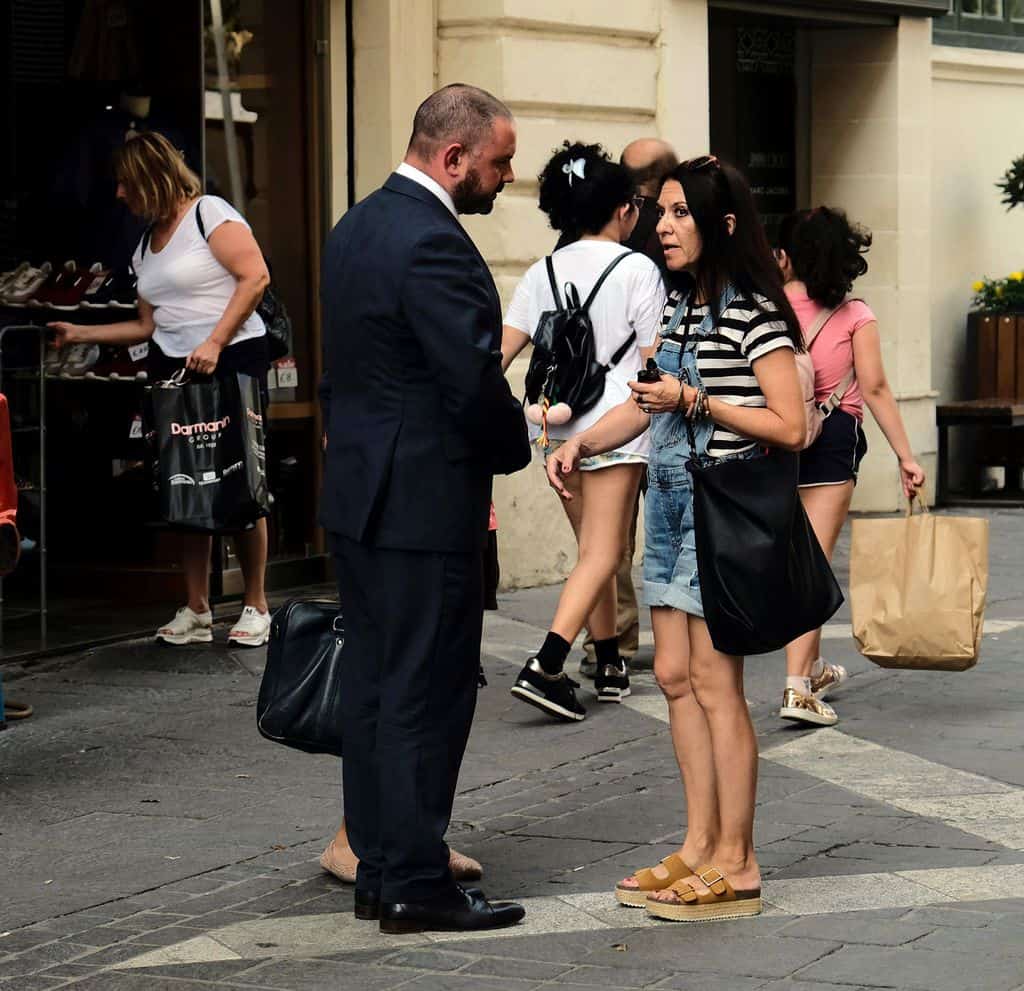 On the afternoon of Tuesday 18th September 2018 –  two days after I’d spent the night protecting flowers and candles from a possible ruthless assault by the government-controlled forces of the Cleansing Services Department – I had the (mis)fortune to bump into Owen Bonnici, the Minister for Justice and Culture, on Republic Street, this being the same man who’d ordered the removal of the aforementioned candles and flowers from the makeshift memorial to the assassinated journalist, Daphne Caruana Galizia.

Although I’ve lived in Malta for nearly 11 years, I come from Scotland where it’s nigh on impossible to get a balloon’s breath away from a politically exposed person so this was an opportunity not to be missed. I rather hoped he might recognise me when I introduced myself as someone he’d met a while ago at Castille but doubt he did as I was only one of 6 women from Occupy Justice who went to read a statement to the Prime Minister last November demanding the resignation of the Police Commissioner (still in place) and the Attorney General – the same guy who took the Magisterial Inquiry from the magistrate’s hands and placed it in those of Joseph Muscat (the subject of this inquiry) and his lawyer and those implicated in the inquiry, such as known money launderers Keith Schembri and Konrad Mizzi, and allowed it to be spread around the whole propaganda machine of the entire Labour Party while the ink of the ‘voluminous’ document was still wet. It’s just transpired, via the same Attorney General, that Owen Bonnici was also given a copy of this document as ‘he was providing legal counsel to the Prime Minister and his wife.’

Is it normal for one of the Prime Minister’s ministers to give legal advice to his boss in an inquiry instigated by the boss designed to dispel ‘the biggest lie in Maltese political history’ by every means possible while not bothering to ask Karl Cini whose name was given as the UBO of Egrant in that all-important Skype call? Is it normal, Owen, to give legal counsel to the person who keeps you in a parliamentary job and entrusts you with administering justice?

No, Owen, it is NOT normal. It is crooked, unethical, illegal and corrupt, and I didn’t even know about the legal pillow talk or the fact you already had the magisterial inquiry in your possession when I spotted you on the street just across from the memorial where I was standing – that monument to the Great Siege which you’d barricaded up barely a week before during the official wreath-laying ceremony for Victory Day when the President was still laying down her victorious flowers as you sent in your workmen with their hammers, scaffolding and nails to ensure that Faith, Fortitude and Civilisation would never see the light of day again. What kind of graceless, artless sledgehammer of the rule of law, are you, Owen? What kind of disrespectful barbarian allows banging and screwing at a formal state ceremony?

Freedom of expression was the first topic on my agenda when we met and I asked you the same question asked by Dutch journalists during a live press conference last July: did you agree with the public mockery of the assassinated journalist, Daphne Caruana Galizia, made by your colleague and Chairman of V18, Jason Micallef?

‘Freedom of expression,’ you began, as if the replay button had been pressed or a coin dropped into the slot of a mechanical clown in some sordid amusement arcade.

Did I really need to remind you that freedom of expression has parameters, especially when you assume a position of public responsibility? Does the Minister of Justice and Culture really need to be told?

Apparently so, just as you embarrassingly thought that your professional and intelligent Dutch audience needed to be told that the reason you hadn’t managed to meet with them previously (or bothered to reply to their diplomatic requests for a meeting) was because ‘We had a very heavy parliamentary agenda which I needed to take care of.’

‘You are a politician, Owen,’ I reminded him. ‘It comes with the territory’, I said. The Queen doesn’t prattle on about how busy she is being a queen, Owen. It is an unspoken expectation of the job.

But then I guess Owen is pretty busy given he’s currently being sued by Manuel Delia on the grounds that censoring the protest in front of the Law Courts – which is, coincidentally, where I met him – a breach of the rights to freedom of expression.

It really is satisfying to laugh in the face of the enemy and while under other circumstances, I might emit some words of thanks, in this case, and drawing on words used by fervent Laburisti in response to the brutal murder of a journalist, he deserved it.  And, apart from in those rare exceptions when cardiac arrest is brought on by an overdose of merriment, laughter never killed anyone.

The right to protest was next on our conversational list and Owen whipped out that excuse he’d prepared earlier:

‘You need a permit’, he retorted in a manner which, like all his manners, I wouldn’t associate with a serious politician.

‘A permit for flowers?’ I asked incredulously.

During our ensuing discussion about his lack of a permit for either the supposed ‘restoration’ of the Great Siege monument or any Restoration Method Statement, Owen did, of course, bring up the ‘damage’ to the monument. When pressed, he reassured me that he wasn’t saying it was the activists who had caused this as he ‘had no proof’. I asked him to state this publicly. The very next day in a published interview, the Minister for Justice and Culture said, ‘the items placed at the foot of the monument had caused damage to the monument’. One of you is lying, Owen. Is it the ‘justice’ or the ‘culture’?

Having brought up the subject of people like me and him who’d surely want to prove our innocence by establishing exactly who owns Egrant via the ‘phone a friend’ option known as Karl Cini and by having our phone records displayed publicly in court indicating clearly that we were nowhere near that brothel in Germany and here’s the proof because who wouldn’t want to wave their unblemished record in front of all and sundry, Owen played his ace card!

‘Have you read the conclusion to the magisterial Inquiry?’ he sneered, his face ominously close to mine as it was throughout our interaction which, at the time, I found quite strange simply because it’s not normal to be utterly devoid of any sense of personal space. But then again it’s not normal for the Minister of Justice and Culture to act as a lawyer for his boss or to be given a copy of the entire Magisterial Inquiry by the Attorney General who only let this slip while under oath in a court case being filed by the Leader of the non-oppositional Opposition who is himself requesting a full copy of this same report.

It’s not normal, Owen, for a Minister of Justice and Culture in a government whose leader swore ‘no stone would be left unturned’ to ensure that the assassins of Daphne Caruana Galizia would be brought to justice, for the Minister of this supposed Justice to leer his face towards mine – a tax-paying law-abiding member of the public – and hiss ‘You believed everything Daphne Caruana Galizia wrote, didn’t you?’

Both the tone and the content of his words gave lie to any semblance of impartiality which, as the Minister for both Justice and Culture (the latter also including etiquette and modes of behaviour), one might expect you to embody. But truth isn’t exactly your strong point, is it, Owen, given that you spread the false rumour that Manuel Delia had dropped his court case against you.

Courage isn’t really on your list of attributes either, is it? My parting words to you were ‘Looking forward to the Civil Liberties MEPs arriving tomorrow!’

Bless, Owen, and this is maybe why the close proximity of your face with mine was never intimidating because, deep down, you’re still a frightened little schoolboy who can’t face the music by himself. You refused to meet the MEPs alone and went along holding the hands of the Deputy Prime Minister – Chris ‘Rule of law’ Fearne – and that other erudite and impeccably mannered bastion of civilisation, the Finance Minister – Edward ‘I can’t go anywhere without hearing about corruption in Malta’ Scicluna.