I will say what I think even if I’m the only one to say it.

Let that piece of supreme self-assuredness hang there for a second and think about the implications. Daphne Caruana Galizia often had to think about being alone, though from what I know of her she did not doubt her own convictions.

I’m made of lesser stuff.

So when I scream like a madman that something very serious has happened when a Justice Minister represents himself with judicial institutions as the personal attorney of subjects of a criminal inquiry, loneliness gets to me.

The Chamber of Advocates President George Hyzler called the Minister’s behaviour ‘strange’. Well, yes it is. Perhaps ‘strange’ dances on the limits of diplomatic etiquette given that the Chamber represents lawyers of different political persuasions and George Hyzler’s statement is stronger than it sounds. After all in this country you agree or disagree with the actions of the Justice Minister according to your partisan frame of mind.

The real loneliness is striking when you think the PN opposition is being remarkably ambivalent about this massive conflict of interest. Some have compared it to Franco Mercieca’s eye surgery. I’m sorry it’s not about that at all. This is not about Owen Bonnici doing a bit of part-time to keep up with his mortgage payments.

This is about the interference of the executive branch of government in the judiciary, the strongest signal yet that our democracy is not functioning properly.

And the acceptance of this grave breach is a stronger signal yet.

The Opposition is arguing in court that it has “the right” to a full copy of the Egrant inquiry. Quite what it hopes to do with it escapes me given they have already stated that nothing can change their views on the published conclusions.

So even having said that they’re making the schoolyard case of ‘iss, mhux fier … lilu tajtu waħda u lili ma tajtnix’.

Out of that argument, if you want to call it that, comes the incredible information from the Attorney General testifying under oath that the Justice Minister is also Joseph and Michelle Muscat’s attorney.

The Opposition keeps its cool.

The infuriating thing is that they give out the signal that they consider this conflict of interest as acceptable and would be par for the course if this was a PN administration in charge. I tell you no PN government before now would have condoned such behaviour.

Consider how Herman Schiavone — not just any MP but one of those allowed to walk barefoot in Adrian Delia’s sancta sanctorum — reacted to Sven Giegold’s remarks that unless Malta changes its money laundering practices he’ll campaign with HSBC to quit the country. 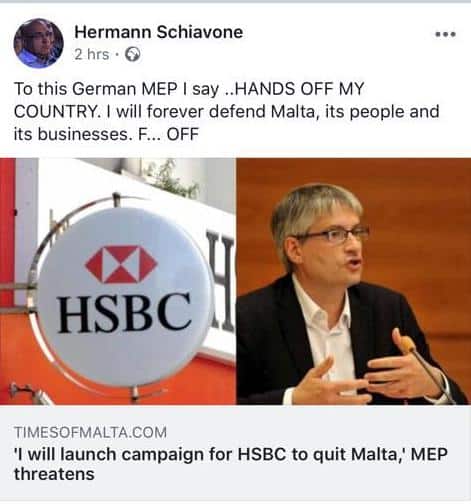 Does it not remind you of Alfred Sant’s prescriptions for EU politicians negotiating with Malta before our accession in 2004 and pointing out what we needed to fix to fulfil our obligations of membership? He would cut off Gunter Verheugen’s nose and brand the other Commissioner Taliban and so on.

We used to express exasperation at Labour’s embrace of mediocrity: that improving our affairs to meet European standards was too much pain for Labour and they would rather tell Europeans to fuck off so we can continue to wallow in our hustling.

The new PN is no different. Now we need HSBC to close down in Malta as much as we need a hole in the head. But we ensure that it stays by abolishing our friendliness to money laundering. HSBC did not need Sven Giegold to make it think hard about the viability of its Malta business as it tries to wade out of the perpetual probation it is stuck in with US and European authorities for past infractions. They have implied as much in the past already.

What does the Opposition do? Put pressure on the government to fix our money laundering problems? Demand that politicians caught laundering money themselves or harbouring those who did be thrown out and made to face justice?

Of course not. The solution is to tell MEPs to fuck off.

Isolated, bigoted microcephaly is contagious. And the PN has become a carrier.