The Malta Independent: no need to be touchy now

The Editorial of The Malta Independent felt its freedom was breached by some remarks I made about their story from last Sunday.

Their Editorial said, “blogger Manuel Delia was quick to claim that our story was a ‘government leak’.” Since what I said about their story was actually a smaller part of a commentary I was making about another government leak that Sunday on Malta Today, I’m actually reproducing here what I said and all I said about that story on The Malta Independent:

“As does today’s front page story of The Malta Independent on Sunday that quotes ‘exclusively’ (for which read a government leak) ‘sources’ (for which read the source of that government leak) that says ‘the investigations’ did not see Pierre Darmanin call Chris Cardona after speaking to Daphne Caruana Galizia in October 2016 and before calling her alleged assassin Alfred Degiorgio.

“The effort is to discredit La Repubblica who published information from its own sources.

“Why did the ‘investigation’ have to provide such important information in a leak? Why didn’t they make a statement in response to La Repubblica?

“And more importantly why did The Malta Independent on Sunday fail to register that both La Repubblica and Malta Today asked Pierre Darmanin to confirm or deny whether he spoke to Chris Cardona that night and he dodged them both?”

At this point I think I need to restate the sequence of events.

La Repubblica publishes a story that says a year before Daphne Caruana Galizia was killed she reported a story that Pierre Darmanin of Żurrieq called her to clarify. She carried that clarification. Immediately after calling her he called Chris Cardona. And immediately after calling him he called Alfred Degiorgio, since accused of killing Daphne Caruana Galizia.

It goes further. Look closely at what The Malta Independent proceeded to report. “The Malta Independent on Sunday is informed that the investigators, both Maltese and foreign, are in possession of all mobile phone call logs from Daphne Caruana Galizia, Chris Cardona, Pierre Darmanin and the three men accused of the murder – Alfred and George Degiorgio, and Vince Muscat.” Again The Malta Independent’s sources are cleverly covering the possible limitations of their knowledge with a careful play with logic gates. I’m going to “translate” again to what I understand the sources are telling the newspaper here: “Look, we’re not the only ones with these phone records. We have no idea where La Repubblica got its information from but it sure is not from us as we don’t have a record of this conversation”.

I never wanted to suggest The Malta Independent on Sunday was “not free” to accept so superficially this spin on reality. Its freedoms are not in dispute here. But however well-intentioned, the superficiality in their analysis is complicit in the government’s spin on this story as it tries to extricate itself from a situation where it starts to realise it is not aware of all information.

The Malta Independent on Sunday’s “sources” also inform Castille. We know that the Malta police are politically captured and we know the government keeps a close political watch on the Daphne Caruana Galizia investigation. Let’s think in the most positive and generous terms possible and let us assume, for the sake of argument, that Joseph Muscat became aware of Daphne Caruana Galizia’s killing around the time you and I were: around 15.05 of the 16 October 2017. He had no idea that it was going to happen ahead of time. 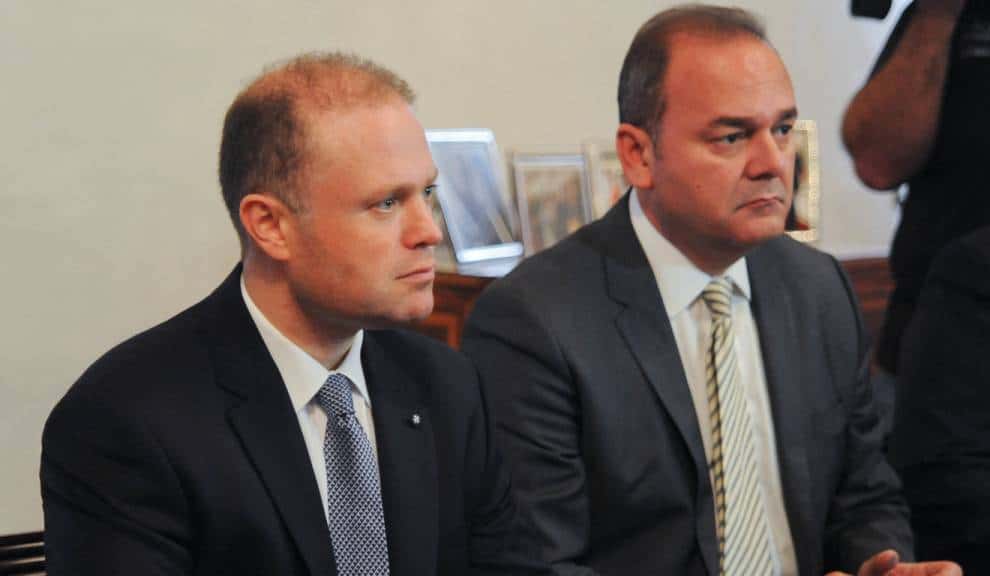 Their concerns will be amplified by La Repubblica’s revelations. The whole point is not merely the desperate need to discredit what La Repubblica says. What’s more important is the concern Joseph Muscat would have right now that his own source of information: the police force he controls is not in possession of all the evidence that exists. That some evidence is in possession of others.

Speaking to an American NBC TV crew today, Owen Bonnici was challenged to explain why no one interrogated Chris Cardona after La Repubblica made revelations about these three-way calls between Pierre Darmanin, Chris Cardona and Alfred Degiorgio. And Owen Bonnici predictably used The Malta Independent on Sunday’s report to tell NBC there are two versions of this story and therefore La Repubblica’s revelations are now inconclusive.

Which is rubbish, of course. The Malta Police should not discount information published in a newspaper just because another one said it was not true especially if that second newspaper has the Malta Police as the source of its information. What the Malta Police would be wondering is where did La Repubblica find out what it said since it sure as hell did not learn it from them.

This is why they nervously told The Malta Independent that “investigators, both Maltese and foreign, are in possession of all mobile phone calls” and that they “cannot exclude a call was made earlier or later on an unknown number”. Unknown to The Malta Independent’s sources perhaps. But who but La Repubblica can know who La Repubblica’s sources are?

I do not criticise The Malta Independent for deciding to publish its story on Sunday. But a newspaper is not merely “free” to publish. It is obliged to go beyond the surface of the motivation of its source and if it is to contradict another journal it must do so because it is confident its own source is better informed.

In this case, its own source was warning The Malta Independent its quite possible they don’t know everything and someone who knows more has informed La Repubblica.

Now please do capture the game that is being played here. The story between The Malta Independent and their sources would have been brokered by the government. It’s not only motivated to do so to give Owen Bonnici a stock reply to some pesky crew from NBC asking him to explain why nothing is done about Chris Cardona’s mysterious phone calls.

It’s also motivated by the grave realisation they don’t know everything; that it is not just Chris Cardona who knows more than they do about what happened; that they are not in control of all means through which further information might be revealed: by journalists, by investigators, by people whose mission to pursue the truth might make an already unbearable existence for the people in government a little bit worse yet.

Interesting times ahead, I think.