I’ve never been compared with a North Korean Ombudsman before

A few days ago I argued editors of independent media should seek the protection of the courts to stop the executive from choosing which journalists to speak to and which to ignore. I made the point after the Institute of Journalists complained Konrad Mizzi only invited One TV and TVM to his press conferences. The rest of the press never gets to confront him, microphone in hand, and never gets to ask him questions One TV and TVM would not think of asking him.

Karl Schembri, veteran journalist, took issue with the argument and posted his comment on Facebook. Saviour Balzan liked it and retweeted it, enigmatically albeit rather transparently without comment. 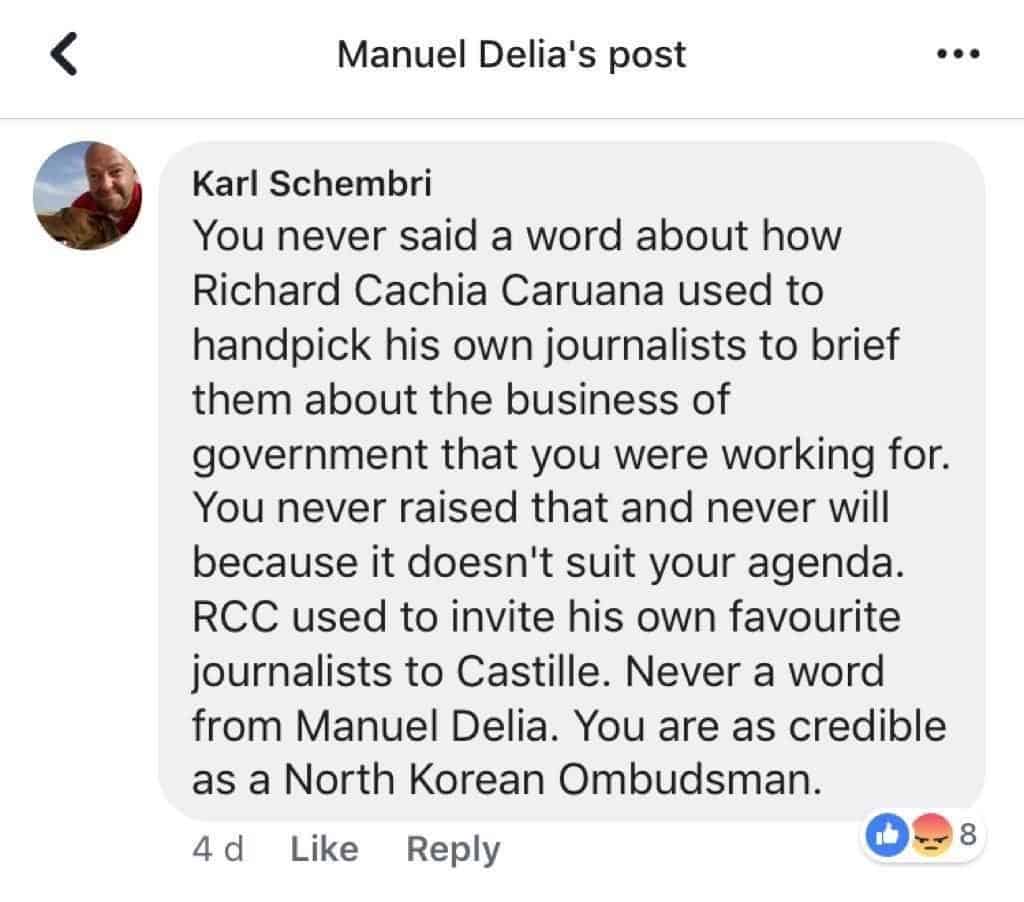 But in reality their objection is not to the argument, which after all concerns them as well, but with the person speaking it.

I have three points to make in reaction.

First, two wrongs don’t make a right. If you believe Nationalist administrations, even ones I worked for, behaved in a way you find objectionable, why do you use that to excuse a Labour administration? How is that useful to anyone?

Second, if you can’t bring yourself to agree with me, don’t make a fool of yourself by disagreeing with the bleeding obvious, even if I say it. There’s nothing good I can think of in Benito Mussolini. But if he were standing next to me saying today is partly cloudy and there’s a chance of rain I would choose between ignoring him or berating him about war crimes. I would not disagree with his assessment of the weather.

Note how so far I have not actually defended what Richard Cachia Caruana did when I worked for the same government. I haven’t done so because the issue is irrelevant. It is only brought up because it was me arguing about Konrad Mizzi’s behaviour. It’s like those people who are chided when complaining their bus is late because eight years ago the bus was late as well. It’s a maddening non sequitur that comes from the age old bi-partisan philosophy of this country that either tribe has its turn to mess things up thereby ruling themselves out of the right to complain when the other tribe is fucking things over.

I can understand it when trolls think like this. But Karl Schembri, really?

Third. Sorry Karl your analogy is really ħass mal-bass. I’m not criticising Konrad Mizzi for having private conversations with journalists, trusting some more than others, feeling more comfortable with some more than others, giving more time to some than others. There are many reasons to object to that but that in itself is not undemocratic, unconstitutional and authoritarian.

What is undemocratic, unconstitutional and authoritarian is denying access to a government Minister altogether, disallowing questions, restricting access to a section of the press to public on the record events purely on the basis of the opinion they hold. That is illegal. Richard Cachia Caruana — who incidentally was not a government Minister — to my knowledge never restricted access to any of his public utterances.

And he worked for a Prime Minister and a government that never left Karl Schembri, Saviour Balzan or their bedfellows at Super 1 out of their guest list at any and all their public events, fielding their questions and giving them full, unhindered access.

So not only is your argument a non sequitur that detracts nothing from my argument, it is also factually wrong.

Now Saviour Balzan, isn’t that ‘no comment’ delicious? You did not comment so one would have to guess what you’re thinking. Are you thinking Richard Cachia was a bad boy? Is Keith Schembri a nicer chief of staff for giving you midnight calls that translate into exclusives, which you deny and threaten libel to those who suggest they occur?

Is that why you don’t have an issue with being skipped from Konrad Mizzi’s guest list? Is it perhaps because a proper all media DOI invitation might get one of your staff reporters to attend diluting some of the control on the story you and Keith Schembri hatch in the dead of night?

How is it so many people appeal to my silence reminding me of my supposed hypocrisies when they flip their masks so often they forget which they had put on?

Previous:Criminal inquiry into Keith Schembri and Konrad Mizzi started “weeks ago” and they’re still there
Next:Darren Debono in Malta