“Not fit for purpose”

The editor of The Sunday Times today noticed it as others have. When on Wednesday I published the story that Nickie Vella de Fremeaux asked her husband Adrian Delia for a separation, a floodgate of abuse came on.

There should have been no question on the public interest of the story as The Sunday Times points out today. Many ‘journalists’ had pompously disagreed.

Josanne Cassar preached that ‘marital problems are not in the public interest’.

Brian Hansford said that only those without sin can cast the first stone, warning that the fact that I was divorced and am remarried disqualifies me from reporting the story.

Josef Caruana, who before becoming a Labour Party candidate called himself a journalist working for the General Workers Union, compared the story to something Daphne Caruana Galizia would have written — he’s not wrong there — and must therefore be condemned by everyone. There he is wrong. 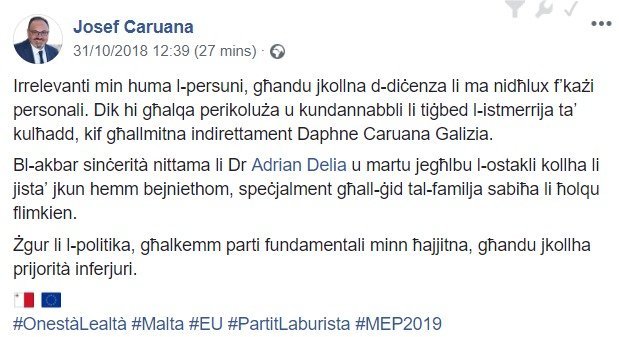 Albert Gauci Cunningham, the poster boy of the Tagħna Lkoll campaign and editor of Malta Today’s sister newspaper said he knew of this story for a long time but was too decent to publish it. He elects himself gatekeeper of information which his decency required him to withhold from the public. 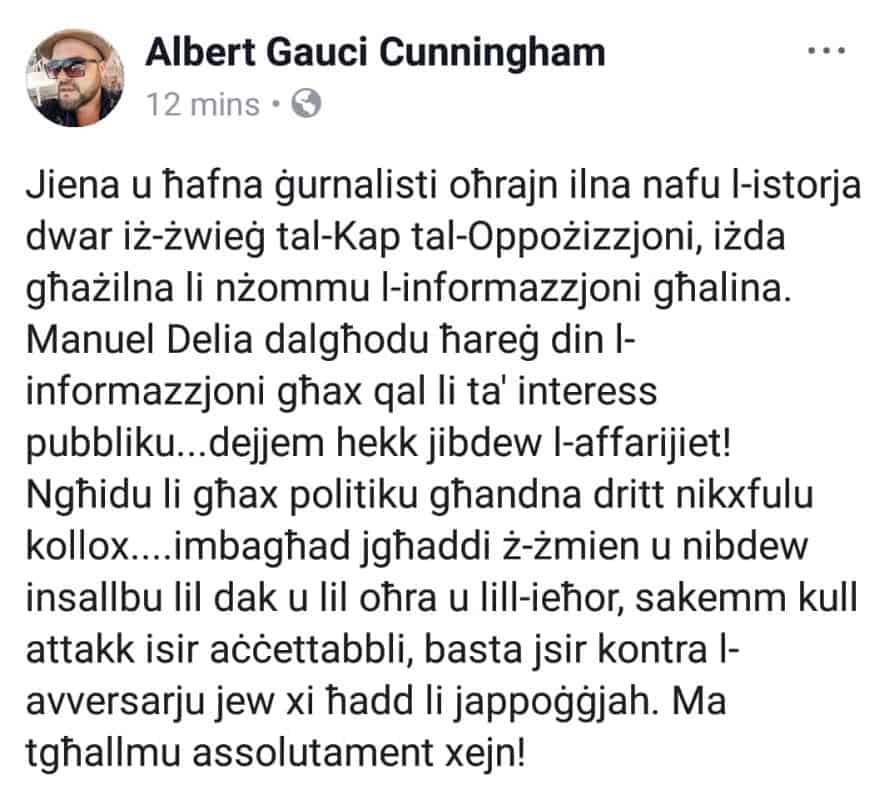 I’m not saying that all journalists who decided not to publish before me were cowards or even that they had partisan reasons to withhold the story. I know some, like me, agonised over the pros and cons of publishing and decided against for cogent reasons I might disagree with but I certainly respect.

But these hypocrites listed here marched on the shared agenda of the Labour and Nationalist parties: Adrian Delia must be kept in place and anything that might threaten his hold on the opposition must be silenced or scared off.

I started by mentioning Cassar, Hansford, Caruana and Gauci Cunningham because they describe themselves as journalists. They are nothing of the sort of course. They are propagandists reflecting the coordinated effort of the Labour Party to pursue its interest in this as in all matters. And their interest is retaining Adrian Delia exactly where he is.

Of course, Adrian Delia enjoys very strong support within his party as well and that came out in full force.

Frank Portelli led the charge but then some of the most violent, virulent, visceral comments were posted all over Facebook and the online comments boards. 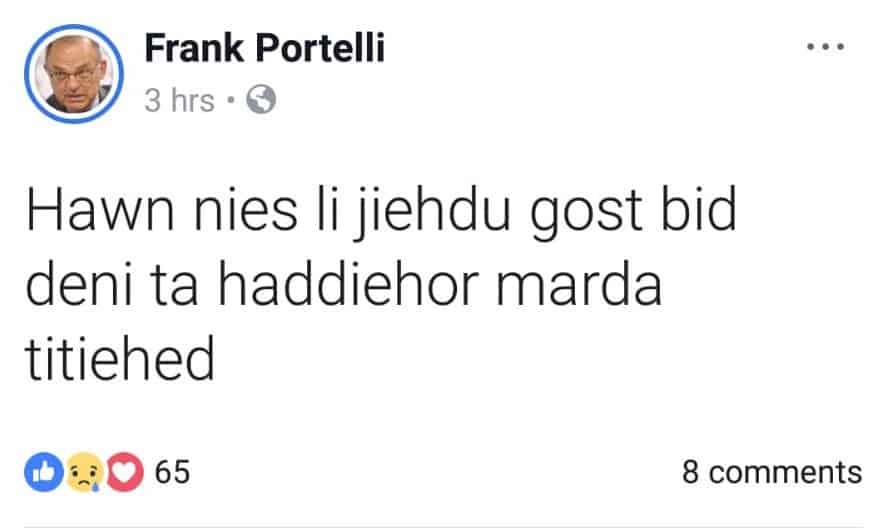 All those fantastical notions, in themselves the only source of information for commenters who were too lazy to read the 180 word piece I wrote that obviously had nothing of this in it, gave license to commenters calling for terminal illness on my and my children, the hope of an imminent fatal accident and a sort of violence and threat not only written by anonymous trolls who fear no consequence but people with their name and picture put up.

I meant to copy and paste some of the comments here but looking at them again is soul-destroying. It’s ironic how people that are so full of it accuse anyone else of hatred. The fact that for many Daphne Caruana Galizia took the blame for this as well, even though she’s been dead a year, shows just what I mean.

And of course anyone who dares defend the content of the original article — that anywhere else in the world it would have been published by mainstream publications, that the story was factual and manifestly not at all what it was being attributed to being— those people get the worst attacks because unlike me they engage in what they intend to be a discussion on Facebook but ends up being a gang rape.

The anger of the PN supporters was genuine but it was misdirected towards me. People in the Nationalist Party are heavily invested in the party leader. They have elected him and supported him and put all their white hopes in him. And in all this, they have been sincere.

They have also mobilised against his detractors from within and from outside perceiving this to be their duty as party loyalists. And they perceive me as such a detractor failing, understandably, to see my writing as anything but “my agenda” which they understand necessarily to mean political ambition.

But what they really will not admit is driving their anger is that they cannot help reading in the story of Adrian Delia’s separation a conclusion inevitable even for them.

Read Saviour Balzan’s article in today’s Malta Today. I’m not in the habit of recommending Saviour Balzan but his analysis is fair, correct and painfully inevitable. Adrian Delia has to go because, in the words he chooses, “he is not fit for purpose”.

They are the same words Daphne Caruana Galizia — the arch villain in Saviour Balzan’s Bond world — used to describe Adrian Delia a year and a half ago when he first burst into the scene wanting to be made PN leader.

It is not the separation that disqualifies him from the job of prime minister. As his supporters rightly point out Alfred Sant and Simon Busuttil did not have successful first marriages. Ġorġ Borg Olivier and Dom Mintoff did not exemplify marital bliss. And Karmenu Mifsud Bonnici never even tried.

But as Saviour Balzan explains many people in the past year have come to see why Adrian Delia does not have what it takes to aspire to be prime minister. Under the simple story of a marriage in break-down is a deeper story of a person who has chosen the wrong career.

Malta Today’s story about Herman Schiavone being involved in conversations about Adrian Delia’s departure is correct but only partly so.

It suggests Herman Schiavone’s misgivings have started now. It will have come as a surprise for many people since Herman Schiavone was one of Adrian Delia’s longest standing supporters and one of his key props throughout this time.

But this website will show how already last March Herman Schiavone was of the explicit view that there was only one way for Adrian Delia’s term to end: with resignation, as quickly and as dignified as could be possibly managed.

What the story of Adrian Delia tells us is not about cruel journalists who reveal secrets but about people in politics who cover them up. For months the people closest to Adrian Delia have been best placed to know how inappropriate he is for the position he occupies. And yet, at least some of them sought to protect their own survival by coordinating, mobilising and unleashing trolls to intimidate journalists into silence.

For though some journalists decided not to publish what they knew about Adrian Delia’s marriage before I did because they did not think it was appropriate for them to do so, some other journalists did not publish because they were afraid of the consequence of being the first to break the news. They just would rather have someone else do it first.

Everyone could see that the violent reaction would be inevitable and not everyone was up for it. And I’m no martyr and I have no appetite for the sort of backlash that I have learnt to expect.

There will be a point when I find the risk unreasonable and the impact on my family and my children unacceptable. That day the agents behind the trolls who give people cues in Facebook groups to tell them just how to scare off pesky journalists will have won.

The bad guy is the prince of darkness behind the Labour Party who wants nothing better than for Adrian Delia to remain where he is, crippled from one story to the next making him and his party perpetually unelectable.

That is no reason to ask journalists to cover up those stories. The truth must be told. That is a reason for the PN to get its act together now, use its own democratic structures to fix its own mistakes and present itself as a credible challenge to Labour’s tyrannical hegemony.

Previous:#TruthNeverDies
Next:So this is how liberty dies: with thunderous applause