Continues from Part 2 published yesterday. Written by a guest writer known to me. 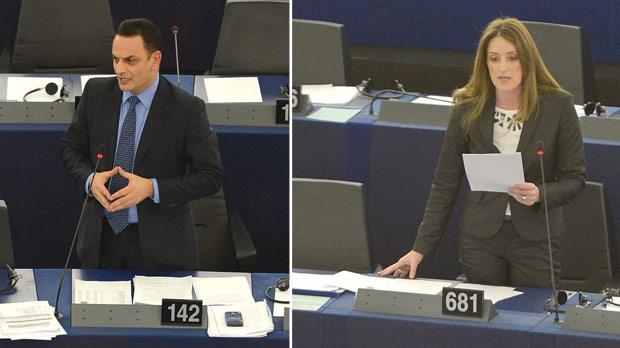 The incumbent Nationalist MEPs have done a good job in protecting Malta and its economy from Labour’s rapacious beast. They have attempted  to show the EU that it is  a group of corrupt politicians that are the problem, not the Maltese people in general; that Malta is not rotten to the core; that Malta’s future is within the EU; that the Labour Party is not the State; that the majority of the people are not corrupt. They have even tried to save Malta from the consequences of Labour’s irresponsible behaviour by trying to avert the suspension of voting rights. They did this in spite of fascist-style attempts orchestrated by Labour to besmirch them.

Labour is trying hard to damage Malta’s economic prospects and in its trademark propaganda style shifts the blame onto the incumbent Nationalist MEPs and EU delegations.

The Nationalist MEPs have targeted the errant gardeners who are tending their orchard of apple trees. The bad trees they are planting are threatening the viability of the entire orchard. It is the Labour administration which is the threat to the financial sector. Their self-serving abuse of the system administration threatens the survival of the entire industry which the Nationalists nurtured to be the motor of the economy.

As if the Nationalist Party would demolish its own creation. Labour is attempting to do it for their short term gain. Their provocative misbehaviour risks punitive measures that will target not just the bad trees but the entire orchard. The Nationalist MEPs are desperately trying to avoid this scenario. It is useless for the Minister of Finance to enact excellent money laundering measures that are rigorously applied to everyone except the Labour Party exponents. He continues to ignore the Labour Tyrannosaur in the room.

Labour has fought a losing battle so far in the European extension of our local Parliament and they have been outflanked by the NationalistMEPs who realise what an asset the EU is for Malta’s future and are trying to preserve that relationship. They see it as the platform that will cushion the effects of the Labour Party’s mad rush into the abyss, and as the platform from which Malta can be regenerated. The fallout following the fall of Muscatism may, in  that way, at least not be as dramatic as that following the fall of Mintoffianism.

The defensive methods Labour have employed to cover their corruption are particularly irresponsible. Their shameless use of nationalism to cover up its own misdeeds is deplorable.

Muscat fed his fellow ministers (including Chris Fearne) to the dogs when cowardly refusing to face his international interviews/ delegations so as to salvage his personal image. Similarly, Labour will not hesitate to risk sacrificing the livelihood of a large section of the population to protect themselves. By wrapping itself up in the cloak of misguided nationalism, Labour and the State become one and any punitive measure against one criminal component results in the collective punishment of an entire nation. Labour is playing a dangerous game.

The political situation in the EU Parliament is the reverse of that in the local Parliament for the simple reason that Labour is using the same tactics it uses to fend off the opposition locally. These tactics cut an impression only with an audience of useful idiots. Labour minister after minster is applying and obtaining permits for extensions to their residences in ODZs.  Be that as it may, after having built the extension, nobody would expect them not to behave in the same way in both the annex and in the original house.

The EU curbed Liechtenstein’s tax haven status, as a result of which, most of their investors shifted to other EU countries. The tax regimes were providing unfair competition and the EU put a stop to this. Liechtenstein’s future as a financial centre was effectively terminated. They could do that because Liechtenstein was not in the EU.

Neither did they have negotiators of the ilk of the Nationalist incumbents to protect their industry with their common sense approach of distinguishing the wood from the trees. Thanks to the Labour government policies and Brexit, it will be easier for the EU to take action against the i-gaming, financial industries and other international investments.

Only the legacy of the previous Nationalist governments is holding off the EU’s punitive arm. The incumbent EU parliamentarians and the two local parliamentarians Simon Busuttil and Jason Azzopardi. These two groups together with the extra-parliamentarian anti-corruption NGOs must be the three indomitable pillars of a rejuvenated Nationalist Party under a new credible leader.

One of Labour’s objectives at the last general election was to isolate Simon Busuttil and Daphne Caruana Galizia. Their main objective at the upcoming EU elections is to oust David Casa and Roberta Metsola. By either not voting or by giving the first preference vote to independents, dissenting Nationalists are aiding Labour in achieving that objective.

Previous:Articolo21: ‘I’ll tell you why not everyone cried when Daphne was killed’
Next:GUEST POST: The argument for multiple parties in Malta