Jot this down in your vocabulary notebook: caecotrophy

Martin Bugelli is full of arcane and beautifully fascinating trivia. He counts columns of fields of knowledge in his arsenal that make conversation with him particularly fascinating. Not for the first time, I learn a new word from him.

Apparently, or so I discovered today, rabbits eat their own shit in order to survive giving the minerals they lose by defacation a second chance of absorption. I suppose from their point of view that’s a good policy, but eating your own shit is otherwise inadvisable.

At night, rabbits eat what comes out of their own behind. They need it for their digestion and to survive. It’s called Caecotrophy. Some political explanations I’ve heard in these two days following PN’s drubbing at the (real) polls are certainly caecotrophic! Digest that … pic.twitter.com/DT8VZOmJRK

Martin Bugelli’s tweet of this morning regaling us with this little scientific fact that will do miracles for your conversation during those awkward silences at family dinner was placed in the context of seeing the PN’s Secretary General, Clyde Puli, finding solace – even pride – in Saturday’s electoral result by explaining it was not quite as bad as surveys from several months ago that said the PN was looking at a worse electoral defeat.

It’s one thing to put on a brave face. But people don’t usually appreciate having their intelligence, however modest they might be about its extent, insulted by someone who’s telling them they should be grateful they only broke both their legs, been blinded in one eye and have to carry a stoma bag wherever they go, because, hey, it could have been worse.

It’s encouraging that the electoral result of this weekend was not terminal annihilation. But it’s completely discouraging to find that the people with the job to reverse the trends find any cause for celebration in the outcome that materialised.

Looking at the comments board under NET TV’s coverage of that interview with Clyde Puli describing as “in roads” a result where instead of a 70,000 vote deficit, the party secured ‘only’ a 40,000 deficit shows that few people are taking this in the way the party leadership intends it.

There’s one important lesson to be learnt, I think, from last weekend’s ballot, that will take a long time to digest.

We must stop underestimating Maltese voters as something only slightly more sophisticated than sheep who vote on the instructions of their party. Doubtless many are and many do but more people will vote on the basis of what they clearly autonomously think is right than we ever thought possible.

The trends are clear. Most of those people traditionally voted Nationalists. But they never did so out of superficial reasons or without a critical attitude.

On the contrary, they did so often holding their noses, trying hard to overlook what they disliked about the Nationalist Party but not allowing those dislikes to come in the way of more fundamental considerations which the PN clearly understood and stood for.

Those 60,000 voters who defied both political parties’ exhortation, explicit or implicit, not to vote for ‘traitors who speak badly of Malta’ did not vote along party lines, even as they voted for one of those parties.

They voted in full understanding that any democracy must have an Opposition and Malta’s Opposition cannot inhabit that joke of an irrelevance we wrongly dignify with the term ‘Parliament’, even less so in Local Councils. The only place where there can be a viable Opposition to Malta’s regime is the European Parliament and those 60,000 voters would rather spontaneously combust than be the ones to deny themselves appropriate representation there.

And it’s not just the 60,000. Look at this chart. The yellow bar includes tens of thousands of people who did not vote in these EP elections because they don’t really reside in Malta but just happen to have an ID card. So don’t judge the number itself as an accurate representative of a protest vote. But many other uncounted tens of thousands are indeed making a conscious choice to stay away from the ballot protesting the behaviour of either large political party, particularly the one they would have in the past considered their own. Clearly the large majority of those would have considered the PN as ‘their own’. 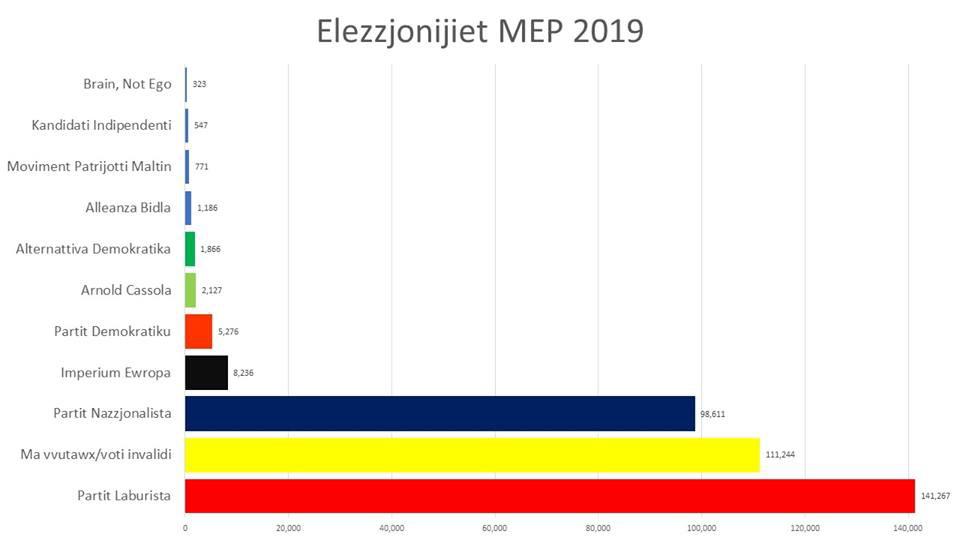 The PN would do well to learn from this. Assuming people who always voted PN would do so out of some sense of duty to party or to flag or to leader demonstrates a pathetic lack of understanding of how these people think.

Yes, they have a sense of duty, but it’s duty to country not duty to party that drives them. They will vote in the way they think best serves their country, and by extension themselves. Treat them as fools and they’ll repay the favour.

Do yourselves a favour then, and stop eating your own shit.