Lizzie Eldridge asked trees how they dare be. 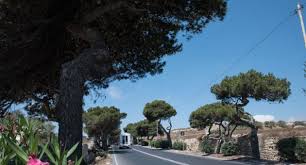 I don’t know about you but I’m fed up with all these trees loitering around on street corners as if they’ve got some God-given right to be there. I mean, what the hell have they ever done for us?

In Malta, with our long hot summers, trees offer shade from the scorching sun and they soften its glare. They give us respite while lessening our chances of suffering both short-term and long-term eye damage such as cataracts, corneal sunburn and, in the worst-case scenario, blindness, a disease suffered metaphorically by the large majority of this country.

Trying to improve our vision? What a nerve these trees have got, eh? What an irritating optic nerve.

Not content with this, trees absorb CO2 and replace it with oxygen so we can breathe – annoyingly beneficial for Malta which this year was awarded the second-highest increase in CO2 emissions in the whole of Europe.

Top this off with the fact that, according to the Lancet medical journal, Malta has the highest rates of asthma in Europe and you’d imagine any socialist government worthy of its name would be veritably hugging the few trees we have left to protect them from the axes of its own Transport Ministry and the Planning Authority, which is either government-controlled or controls the government or both.

Yet the detrimental effect of increased levels of CO2 can actually be an advantage for trees and their ability to survive against all odds must be infuriating for the government’s scorched earth policy. Unbelievably, more CO2 can actually make trees healthier and enable them to grow during extreme weather conditions such as droughts – great for Malta as it rarely suffers from too much rain, although with climate change intensified by the destruction of nature, who knows what the future holds?

It’s us human beings who have caused this damage with our cars and our pollution and yet here are these trees, still offering us a friendly solution. No matter how hard we try to stop the little blighters, they just keep on growing. Anybody would think they were doing us a favour or something.

Just to add further insult to injury, trees filter out bad smells and when the temperature hits 40 degrees, we’re all too familiar with those odours emanating from our overcrowded buses. Talking of which, trees also counteract pollutant gases which means that if we allowed nature free reign, there could be improvements to our air pollution record which currently stands as one of the worst in Europe.

Road transport – including our buses but let’s not forget our excessive use of cars and the notable increase in large expensive cars under the Labour Government  – is cited as one of Europe’s main sources of air pollution by the European Environment Agency, along with emissions from agriculture, power plants, industries and households.

So you can see why it makes sense for our government to cut down trees to widen roads and make room for a plethora of petrol stations and conjure up fake universities on our once green and pleasant ODZ land.

Emissions from agriculture are easily dispensed with by cutting it out altogether. Who needs such old-fashioned methods of growing food when we can replace agrarian soil with massive towers and hotel complexes which gobble up every available patch of untilled turf?

And as for power stations, we have Electrogas, the government’s triumphant flagship for its 2013 election victory which, as it transpires, was a stitch-up so its director, Yorgen Fenech, could set up 17 Black, an illicit Dubai company used to funnel kickbacks into the equally illicit Panama companies owned by Konrad Mizzi and Keith Schembri.

Those bloody trees, eh? They get in the way of all the best-laid plans when the hope was that nobody would see them apart from the wood in the paper trail between Mossack Fonseca and Nexia BT. There we were duped into thinking that the miracle Azerbaijan energy deal was done to reduce our household bills.

And yet our household bills could be substantially lowered by placing trees in strategic positions around our homes, halving our need for summer air conditioning and, as a consequence, reducing carbon dioxide and other pollutants emitted from power generators like Electrogas.

Unless our home happens to be in db Towers, a project halted by a landmark court decision following a successful appeal by NGOs, residents and 3 local councils. Basic common sense dictates a conflict of interest between Matthew Pace’s position on the PA Board and the fact he’s a franchise owner of Remax Alliance Swieqi, an estate agency happily trying to sell off apartments in this unbuilt tower long before the original vote had even been taken.

Pace resigned from the PA Board only hours ago, a decision taken ‘for personal reasons’ according to Ian Borg, a government spokesperson for environmental vandalism. Something tells me it won’t be the last we see of Pace.

The Planning Authority he was intimately involved in has been doshing out permits like there’s no tomorrow. Dince 2013, the number of newly-approved dwellings increased by 376%, an average of 74% per year.  The latest controversy involves the Fortina Hotel which has just received parliamentary approval to develop apartments, business and commercial activities on land originally earmarked for tourism purposes only. Prior permission was granted by the PA to Edward Zammit Tabone to demolish an existing block and replace it with a 15 storey office block which, despite no approval from the Lands Authority and the fact the block’s yet to be built, has already been sold off to a gaming company, BET365, for 65 million euro.

The suffocation caused by this ever-expanding concrete jungle could be alleviated by the trees sacrificed in its name as they break up the heat and release cool refreshing water, much needed when you’re stuck in traffic caused by this frenzy of construction.

Medical research also suggests that the sight of nature has healing qualities far greater than the 1 euro paid in selling off our hospitals to Vitals and Steward.

And then there’s fruit, of course, that natural product which means we’re less likely to need hospitalisation and might lose our prize for having one of the highest rates of obesity.

Fruit basket springs to mind when you think of Edward Scicluna who’s filed a libel case against Simon Busuttil for accusing him of ‘being embroiled in money laundering investigations’ when he categorically is. After Repubblika’s request for an inquiry into the highly controversial Vitals deal was upheld by the courts last Thursday, an investigation has now been opened against Scicluna and his co-conspirators, Chris Cardona and Konrad Mizzi, placing them all in the spotlight for suspected money laundering.

But fret ye not because that bastion of transparent honesty, the good old db Group, is coming to everyone’s rescue with its mission to ‘decry falsehoods’, insisting that it will not ‘allow the truth to be buried’ but will bury us instead. Despite a record number of objections from 4,500 members of the public, local councils and NGOs followed by the successful appeal referred to earlier, the db Group will not be silenced in its search for truth as it stamps out all injustice with its bulldozers and cranes.

If any of you reading this share the same concerns as corrupt politicians and their mates of masonry – because everybody likes a little extra in their pocket, don’t they? – then trees can help as well. They create environmentally-friendly economic opportunities and their presence increases the price of your home – a glimpse of beauty amidst man-made ugliness.

These trees have got a cheek, haven’t they? So why not chop down 549 of the fuckers preening around in their foliage, with 272 of these monstrosities of nature trying to hide behind their protected status, when what we need are wider roads for our expanding range of expensive motors that fell off the back of an overloaded lorry piled high with government handouts?