Manuel Micallef, Labour ideologue, TV host, and mirror-wanker extraordinaire put this up on his Facebook fully pretending his attempt at humour to be innocent. 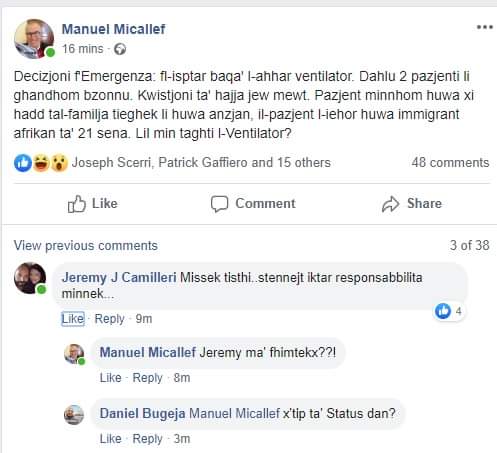 At least I hope he was joking, however pathetic that humour would be. For the benefit of all, here is his post translated: “A decision needs to be taken at the hospital’s A&E: There’s only one ventilator left at the hospital. Two patients are wheeled in needing the ventilator. It is a matter of life or death. One of the patients is an elderly relative of yours, the other patient is a 21-year-old African immigrant. Who will you give the ventilator to?”

Is this meant to be funny? Is it meant to be an opening to a racist joke? Or is it meant to be the opening of an ethical debate? He describes medical triage in a field emergency where a choice of cure needs to be made between two patients. He knows full well that race would never come into the equation but that the decision would be taken on the basis of the clinical chances of either patient to survive. And he knows full well that a relative is too conflicted to make a choice like that.

But he also knows that not all of his readers know any of this. Most of his readers do think of ethics as something independent of their prejudices and intuitive preferences. So he’s stoking them and provoking them just in case they found someone arguing that a 21-year-old African man, who does not deserve to live by virtue of his race, gets the ventilator that was meant for nannu.

Manuel Micallef does not ask what can be done to ensure there’s enough ventilators for everyone. That’s the fun of schoolyard moral dilemmas. We used to ask each other these pointless questions when we were 7 at school: if your sister or your girlfriend were drowning in a pond and you could only save one, who would you leave to drown?

Presumably Manuel Micallef has the answer. He’ll assure us soon that he’s not racist. He’ll express outrage at the suggestion that he is. I find now the more racist one is the more vehemently the title is rejected. Maybe Manuel Micallef will tell us that many of his friends are black.

Or maybe he can answer the question in the title of this post and hope no one is offended. It’s two in the front, two in the back and the rest in the ashtray by the way. Hurts, doesn’t it?

Previous:Speak up
Next:16 April: 30 months waiting for truth and justice