The ghetto is closed 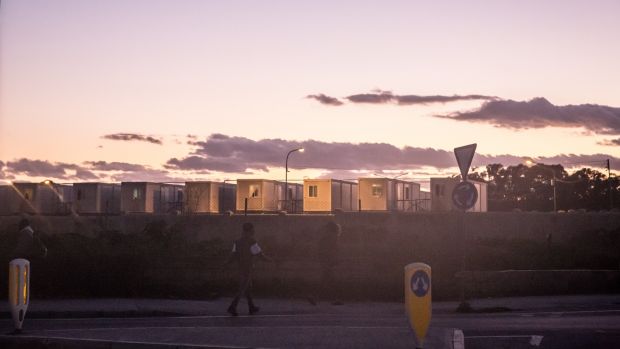 Ministers Chris Fearne and Byron Camilleri went through great pains yesterday to insist there was no racism behind their decision to lock inside for two weeks a thousand residents of the Ħal Far migrants centre. I say ‘centre’. I could call it what Byron Camilleri called it: HTV, Ħal Far Tent Village. Quite.

The point they underlined was that the grounds for their decision were purely medical. They were doing what they would have done in any other case, irrespective of the skin colour of the medical subjects concerned. Let’s examine that, shall we?

Locking up a thousand people because 8 of them have been infected is a situation that applies in no other case on the island, at least none that we have seen so far. By the same token if 3 people are infected in Mdina, would the entire population of the old city be locked in within the city walls?

Not likely. And that is because the residents of Mdina live in decent conditions where they’re not sharing too few toilets and are not cooped up against each other whether they are related or not. The conditions of hygiene are far better and not because black people do not like to be clean but because there are far fewer facilities, far lesser quantities of warm water, far more people per faucet in Ħal Far.

To use the discourse of the plague, Ħal Far is deep in a miasma where you breathe disease. It was left there to fester and the decision to do so has been taken every day that immigrants have been forced to live under curfew in squalid conditions.

A year ago today one of the residents of that centre was shot dead for sport. Three other migrants were injured. The people suspected of perpetrating that crime are sitting out the pandemic at home with their families. Lassana Cisse’s family is locked down in Ħal Far for the next two weeks. His family are not wife, parents and children. His family are the 1,000 people he lived with in a migrant camp.

The thing with closing a town (the “HTV” is larger in population terms than several towns and villages in Malta and Gozo) and locking together inside it the healthy and the sick is that from the inside it feels like abandonment. I would like to think the residents there were told more than that they were being locked up for their own good.

I would like to think they have been told how they are going to get their food. How the place is going to be sanitised and cleaned, or is it just buses that are deep cleaned every night because black people have been on them during the day? How people showing symptoms of COVID-19 but not yet confirmed by test to have contracted it are going to be kept apart from the rest of the population, or are they not?

Certainly, none of these questions were clearly answered at yesterday’s announcement. They may have been considered details for the ears of the Ħal Far residents themselves and if the information has been provided and these considerations taken care of, all well and good.

But somehow I doubt it. If we’ve done away with this problem by letting it fester inside a prison abandoning inmates to their own fate, then yes we have acted with racial and social prejudice taking it for granted that stateless migrants from Africa deserve less chance of survival than anyone outside their gates.

What’s the solution? Am I suggesting letting the disease spread?

But we could start by recognising that the fact there was no virulent pandemic in play before February was never an excuse for the Dickensian squalor at Ħal Far and the other centres. Decent living conditions, open space, freedom of movement, sufficient water supply, proportionate toilet and washing facilities and the ability of more people to move out of migrants centres to live in the community in affordable housing would have prevented the misery of this hotspot that in the space of a year has experienced indiscriminate drive-by shootings and a mediaeval ghetto lockdown that should bring Werner Herzog out of retirement.

Now we can start addressing the problem within the self-imposed limits of years of neglect. Some of it is being done. The ministers yesterday spoke of the segregation of the infected and relocation of the vulnerable. Details about where they’re being relocated to are thin at this stage but the principle itself is positive.

We need to hear more about what will happen to the rest stuck in there. Without work they must still subsist and the conditions they live in need to be improved. If they can’t be improved on location, perhaps the authorities should consider testing the healthy among them allowing those that are confirmed negative for COVID-19 to move out and set themselves up with friends in the community where they are less likely to be infected.

Above all we need to know how these ghettoised residents are being made to feel like they are in the same boat as us, that we have not locked them up like theirs was a large leper colony which we would forget about. Because if some of us are worried about our mental condition because we’re stuck inside our house and garden and because it’s controversial whether we should go out for country strolls, we have to start imagining what it is like to live for two weeks trapped inside the noise, the smell and the fear of Ħal Far.

The quarantine that has been ordered is for two weeks. But if the disease spreads further in the centre, things are going to get hot. The government is responsible to ensure this does not happen.

The PN’s remarks yesterday evening that the government could have prevented the situation to come to this point is an important warning. They also took the argument further and said that the situation in the Paola prisons is another disaster waiting to happen.

Again, overcrowding there did not start with COVID-19 but the present situation makes the problem even graver. The government should consider sending prisoners over a certain age out on compassionate leave and, as the PN suggested, set up other detention facilities perhaps for lower risk inmates.

All most people want to hear is that black people are kept out of buses and criminals stay locked up. That way the perceived purveyors of disease are kept away from our streets and our food stalls. The government needs to be thinking rather harder than that.

Previous:Repubblika Live: How to join the data leaks class action and a Maltese doctor in Milan
Next:ONE YEAR AGO TODAY: The Triq tal-Ġebel