Well, well, well. Joseph Muscat thinks he can just slink off into the Azerbaijani sunset and laze around in a hammock for the rest of his days. The Limestone Cowboy wants to hang up his studs, walk off into the Panama sunset and all will be forgotten. It’s that easy, eh?

In Malta, perhaps it is. We’ve been living down that rabbit hole for so long now that even though we’re scorched by the sun, we’ve lost sight of daylight, the (supposedly) post-covid air remains choked, and we’re unable to sit peacefully, uncriticised, beneath the cool shade of the few remaining trees.

But Joseph Muscat ‘plans to make his final exit from politics after the summer holidays’.

Take your time, Joe. Chill out on the beach for a while. Drink a Petrus fruit cocktail with an iced bun on the side. Don’t mind us. We only forced you to resign as prime minister two minutes ago, a resignation that saw you leave in disgrace, reeking of your entanglement in the brutal assassination of Daphne Caruana Galizia. In the words of the Ombudsman, whose 2019 report was submitted only last Monday:

‘2019 was a year when civil society became more organised, vociferous and proactive. Spurred on by dramatic events that through concert, design or pure coincidence exposed the negative corruptive ties between big business and the public administration. Civil society was galvanised into action. This and other factors, eventually brought about the downfall in disgrace of an administration that enjoyed the backing of a sizeable majority of the electorate through implementing successful, economic policies.’

This was only last Monday, Joe, only last Monday, the same day as that other disgraced member of your disgraced administration promised to ‘tell the truth’ in some sensationalist reveal-all tabloid drama. Somebody needs to remind Keith Schembri that truth-telling is a sine qua non of any court appearance. Somebody needs to remind Keith Schembri where he left his phone.

He also said that he called Yorgen Fenech on the eve of his arrest. He said he advised Fenech not to leave Malta. He told the court that it was you, Joe, who made him make this call.

Let’s leave the obvious aside, such as a prime minister should never have been anywhere near the police investigation in the first place, especially when he’s a potential suspect from the start, and that we’ve already heard ample evidence of Silvio Valletta’s shenanigans with Fenech at the football and in his Rolls Royce, and that accusations have been flying about Schembri – who was there, like some sinister shadow, at top security meetings about the investigation – leaking information to Fenech who leaked information to Melvyn Theuma who was getting information from the disgraced ex-Police Commissioner who’s now under criminal investigation. Let’s leave all this aside.

Last Monday, Schembri stated in court that you, Joe, gave him the orders to phone Fenech hours before his arrest and tell him not to leave Malta. Given that the three of you shared a private WhatsApp group, why didn’t you do this yourself? It would have been quicker, no? Hotline from the OPM to the prime suspect in the brutal assassination of a journalist who you termed a ‘hate blogger’ but promised to leave no stone unturned in the hunt for her killers. You could have had a three-way chat, Acapulco style.

Oh, look. Didn’t the Deputy Leader of your Party just resign too? Must be stressful being accused of passing €350,000 to assassination suspects. Anybody would think it was enough for an arrest. Perhaps not if, as the self-confessed middleman attested, a Labour victory in that ‘snap’ election would give protection to those plotting Daphne’s assassination at that time.

Safe as houses, Joe, except in Malta those houses kill, leaving people buried beneath the rubble of their own homes.

And where else would you keep your money safe but in a Panama account, like Schembri, who told many untruths last Monday and revealed things he’d lied about before. But that phone call Joe, that phone call. I mean.

Schembri’s version of ‘the truth’ was that everyone else was lying, including his trusted family doctor passed on to him by his good pal, Fenech, who also tells porkies by the way. But you didn’t dispute the truth about the phone call, did you, Joe? When the rats start ratting, it’s every crook for himself.

And you’d have us believe that it’s perfectly normal for a Prime Minister to ring his right-hand man and tell him to phone the main suspect in a police investigation into a major assassination and ask him not to sail away from Malta in his yacht. As normal as Schembri opening Panama accounts because ‘it’s the fastest’ and 17 Black was only a target client because the man charged with masterminding the assassination is ‘a good friend’. All perfectly normal and above board.

Yes, yes, said Joe, scratching his head: ‘I had spoken to Keith Schembri and I remember telling him over the phone, ‘make sure this guy doesn’t leave.’ It’s a wonder Lawrence Cutajar and Silvio Valletta didn’t get there first. It seems the Limestone Cowboy wears a number of hats.

One of these was made in Montenegro and it’s hard to believe, given the news has only just emerged, that Joe really thinks our memory is as hazy as his. Farcical even. What you saying, Joe? That the revelations about the wind farm scam are all hot air? That carpet you’re sweeping everything under is really billowing in size, especially since you placed Konrad Mizzi underneath it. But, like a true soldier of steel, he’s refusing to go down without a fight. Laburist sal-mewt! 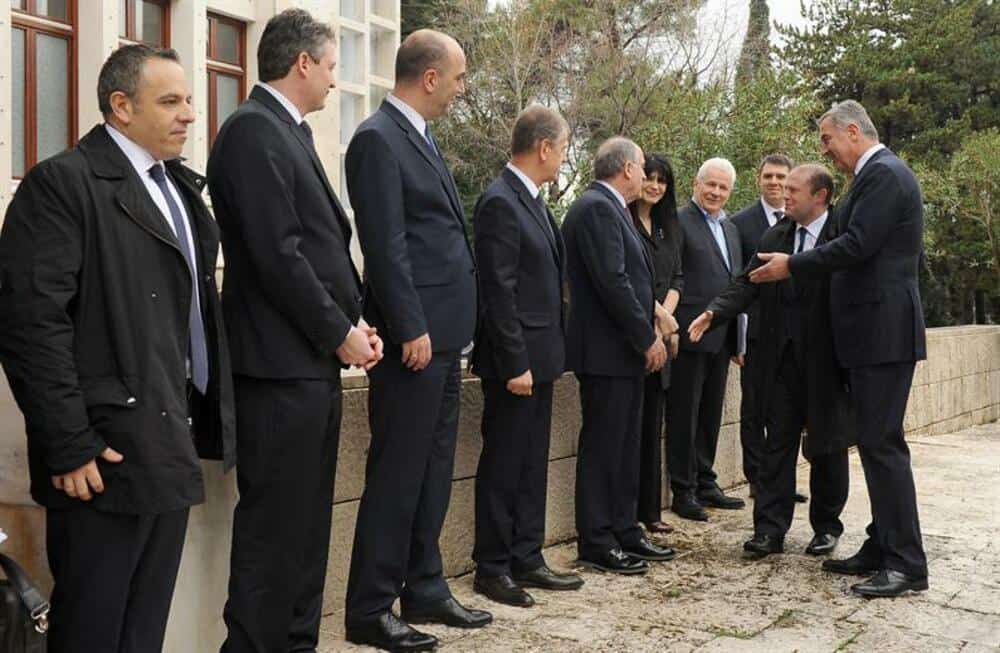 We’re in the midst of news, Joe, that the wind-farm you inaugurated in Montenegro last November, when we were in the streets of Valletta demanding your resignation, was a crooked deal involving Fenech’s 17Black shafting millions from the pockets of the Maltese taxpayers via the state-owned Enemalta, ‘the special purpose vehicle for the government’s corruption’. We’re in the midst of news, Joe, that the Electrogas project was at the heart of your criminal roadmap, enabling your friends in Azerbaijan to cream off profits from the taxpayer, with huge amounts of kickbacks aimed at the Panama accounts of Mizzi and Schembri thanks to Nexia BT.

There’s a lot of players involved there already, isn’t there, Joe? And there’s more. There’s always more. We still don’t know who owns Macbridge, for example. Do you? And let’s not forget Egrant. You wouldn’t want us to do that now, would you?

And let’s not forget that when Daphne was assassinated, she was working through thousands of leaked documents from Electrogas. Or that she’d rumbled the dodgy dealings with Montenegro long before. More or less at the same time as the assassination plans were put in place. More or less exactly, wouldn’t you say?

Oh, look. The government press release in Daphne’s post includes Shanghai Electric, which takes us back to Cheng Chen and Konrad Mizzi’s wife. Funny how the dots start to connect, isn’t it? Daphne even spotted the Vitals link, which brings in Chris Cardona and that ‘victim’ Edward Scicluna. As Daphne pointed out, ‘These dealings all involve Konrad Mizzi and Joseph Muscat.’

So you thought, Joe, that this week was time for the Limestone Cowboy to hang up his hat, that you’ve already ‘paid the highest political price’ for engineering the darkest bloodiest period in Malta’s history. Just as you delayed your ‘resignation’ in order to sew things up in Montenegro and Dubai, you’ve magnanimously decided to defer your latest exit till October to ‘create some distance’ between your departure and the ongoing court case.

A couple of months lying on a COVID hotspot beach should do the trick, shouldn’t it? Feelgood factor 50. Who wants to be reminded of pesky journalists blown up in car bombs or that you, Joe, had a hand in it all? Who wants to contemplate the conclusion reached by your then Justice Minister, Owen Bonnici, the guy who violated human rights?

There are crooks everywhere you look now. But what the fuck, Joe? We’ll get you.