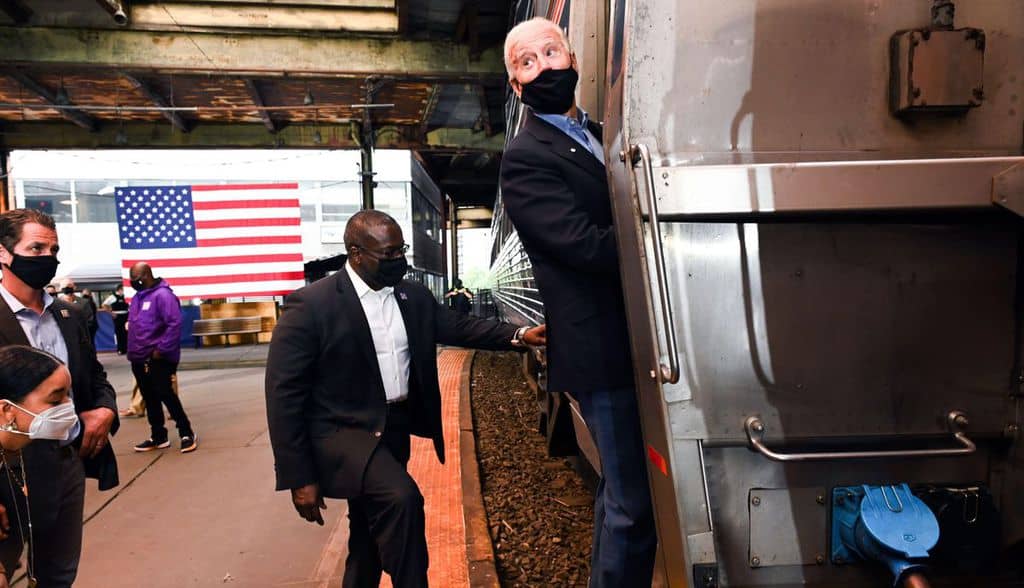 Abraham Lincoln and Joe Biden both had to change their travel plans on the eve of their inauguration for security reasons. Biden was planning to travel on an Amtrak train from Wilmington to Washington for his inauguration as the 46th President of the United States to highlight four decades of commuting on his chosen mode of transport, which has always been part of his “Regular Joe” routine.

Both men came into office under siege from their enemies even though their term had yet to start. Already in the new year 1861, two months after his election, Lincoln’s desk in Springfield, Illinois, his home town for a quarter of a century, was already swamped with mail containing daily threats by secessionists of death by bullet, knife, poisoned ink and, in one instance, spider-filled dumpling. Like Lincoln, Biden’s virtual mail – his Twitter feed – is overflowing with invective and threats.

Like Biden, Lincoln liked to portray himself as an ordinary person who eschewed ceremony, a “Regular Abe” if you will. He was a regular fixture at the post office between his election and his inauguration, stuffing “a good-sized market basket” with his latest batch of letters, and then struggling to keep his footing as he navigated the icy streets. Among this barrage of poison letters, a few warnings from friends did go through, but Lincoln ignored everything: both threats and warnings. 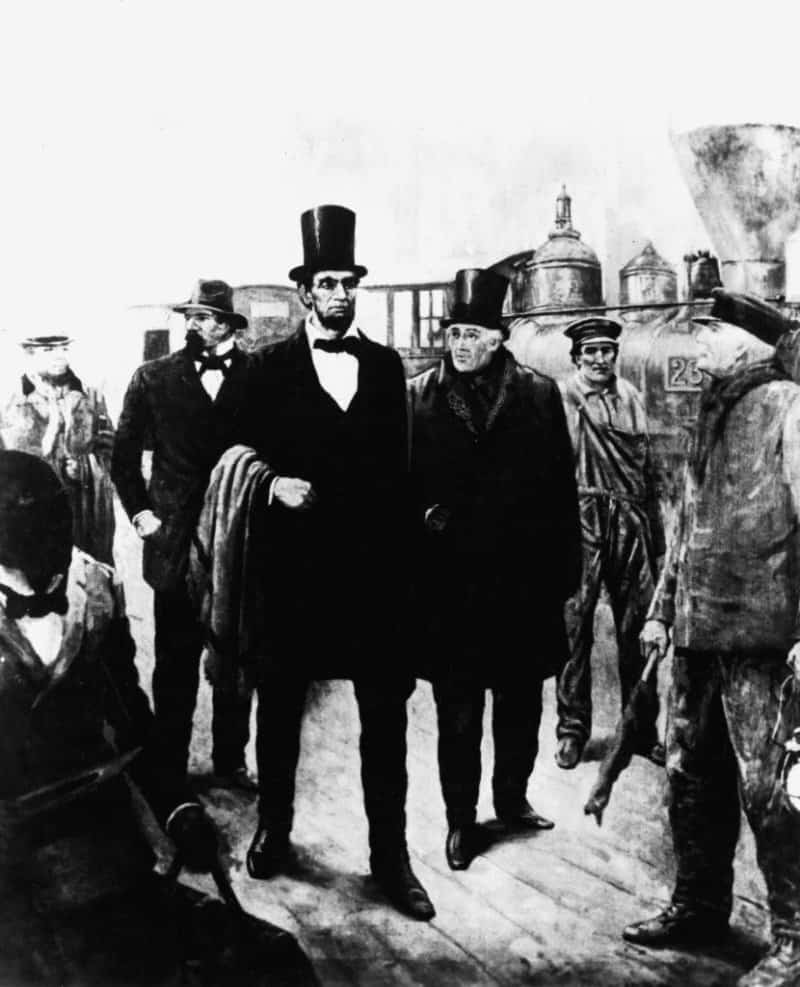 An illustration of American President-elect Abraham Lincoln walking near a railroad engine in Washington, D.C., on February 23, 1861, with detective Allan Pinkerton, who foiled a plot to assassinate Lincoln ahead of his inauguration that year. Kean Collection—Getty Images

Lincoln’s inauguration was on the 4 March (changed to 20 January, beginning 1937, following the ratification of the Twentieth Amendment to the US Constitution where it has remained since) and presented great logistical problems because the president-elect, sticking to his simple ways of doing things, abhorred pageantry and ostentatious displays, and refused military escort on his way to Washington. 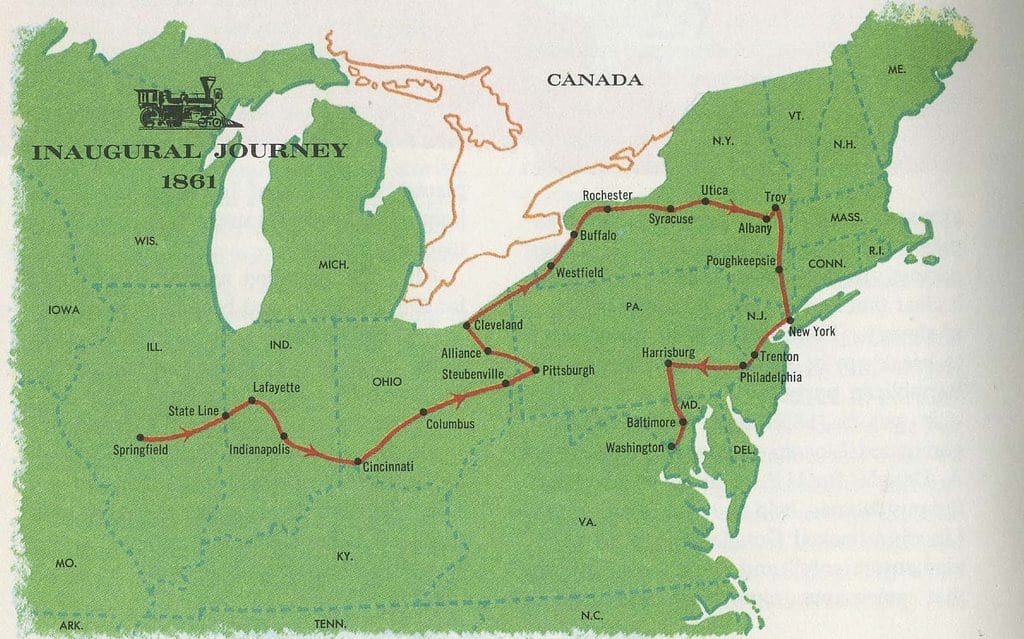 But clearly, not all threats could be dismissed and one railway executive, Samuel Morse Felton, president of the Philadelphia, Wilmington and Baltimore Railroad, thought that the president-elect was being needlessly foolhardy. It had reached Felton that secessionists might be mounting a “deep-laid conspiracy to capture Washington, destroy all the avenues leading to it from the North, East, and West, and thus prevent the inauguration of Mr Lincoln in the Capitol of the country.” He then hired Allen Pinkerton, the founder of the Pinkerton National Detective Agency – the precursor to the FBI – to protect his rail lines. 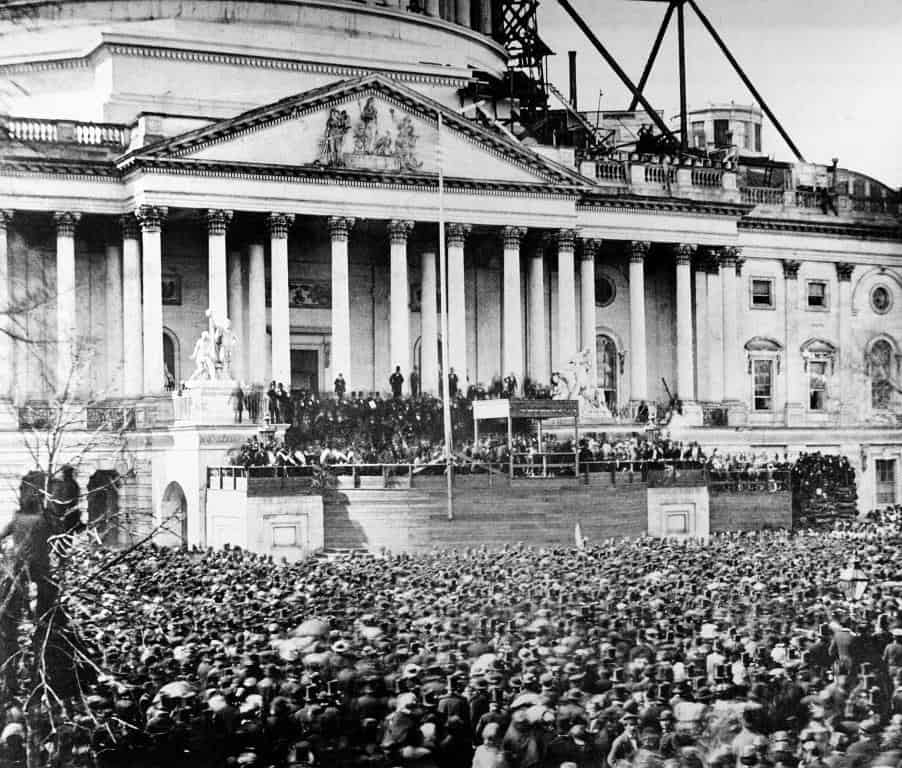 Today, just as in 1861, the main rail stop between Philadelphia and Baltimore is in Wilmington, Delaware. Biden is on record saying that he’s not afraid of the threats but the FBI and Homeland Security thought otherwise and travel plans were changed.

If it sounds eerily similar to 2021, that’s because it is.

Both presidents-elect abandoned the inaugural train in favour of safer, unpublicized means. In both 1861 and 2021, white supremacists constitute one wing of a major political party (then, a Democratic Party now, a Republican Party). In both eras we have certain sectors of the media spreading lies and disinformation about a president on the verge of taking power by democratic means. Then the chief culprit was The Charleston Mercury, now, mainly Fox News and fringe right-wing radio stations.

But this is where the parallels with Lincoln end.

When an American president is inaugurated, the swearing-in signals to the world, especially to its enemies abroad, that this is the apex of American democracy and power. The presidential inaugural address also marks the smooth transition of power, no matter how bitter the campaign and the election.  No matter how divided the nation is, on Inauguration Day, America is united ‘in brotherhood from sea to shining sea’.

But not Inauguration Day 2021. This year, we see a diminished America, a nation coming to terms with the inglorious spectacle of an American mob storming the Capitol. The last time the Capitol was ransacked was in the Burning of Washington in 1812 by the British invasion of Washington City (now Washington, D.C.), the capital of the United States, during the  Chesapeake Campaign.

America is used to threats. Such threats have been a persistent law enforcement priority in the years after 9/11. Most of these threats are from homegrown insurgents radicalized by Al Qaeda or similar groups.

In contrast, the threats against Biden’s Inauguration are fuelled by supporters of President Donald Trump, far-right militants, white supremacists and other radical groups. Worse, the insurgents that stormed the Capitol, what Ronald Reagan called the ‘shining city upon a hill whose beacon light guides freedom-loving people everywhere’, was provoked by an American president who with his STOP THE STEAL! dumpster fireside chats immediately after polls closed on the 4 November, lit the match that led to the worst day in American democracy.

The damage that Trump inflicted on the heart of American democracy will not be repaired by him not attending the Biden Inauguration today. Some have decried Trump’s decision to snub his successor’s inauguration as ‘uncouth’ but this is one of the best decisions Trump ever made. Trump is to the insurgents what Osama bin Laden was to the Al Qaeda terrorists, a deluded and deranged figurehead intent on overthrowing American democracy.

It escaped no one’s observation while we watched the storming of the Capitol on our screens, that the building that was saved from the 9/11 attacks by real American patriots who wrested the plane from the hands of the terrorists and losing their lives in the process, was being breached by bogus American patriots instigated by a fraudulent American president. There have been bad American presidents in the 232-year history of the United States, but Trump is the worst of them all for he used the power of his office to overturn a presidential election.

Violently. And without regret. In his farewell address to the nation, he bragged that the ‘movement we started is just beginning’.

What should happen to Trump now? He cannot be allowed to get away with it. As commander-in-chief, one of his roles of office, he commanded the insurgents to head down to the Capitol to stop the election being stolen even though judge after judge, around 60 at last count, threw out every lawsuit contesting election processes, vote counting, and the vote certification process in multiple states because they were without merit, frivolous even.

The rioters obeyed the instructions of the president. After telling them he loved them, calling them ‘special people’ and ‘patriots’, he then predictably threw them in the dumpster fire he lit saying that ‘America is a nation of laws. Those engaged in the attacks will be brought to justice’.

Trump is used to slapping his name on everything he builds, be it a skyscraper, a golf course, a casino. Congress must ensure that no federal buildings and other structures should be named after Trump for his presidency must be remembered but never celebrated. Above all, it must never be forgotten. We tend to repeat forgotten history, or rather revised history. Above all, there is no reconciliation without justice.

As Tim Naftali wrote in The Atlantic: ‘If Trump is now the worst president we ever had, it’s up to every American to ensure that no future chief executive ever exceeds him.’

He should know. Naftali was the first director of the Richard Nixon Presidential Library and Museum.