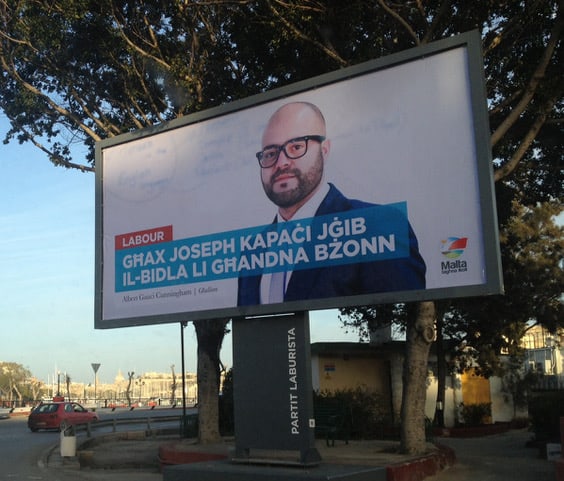 Albert Gauci Cunningham was on another 2013 Labour Party billboard telling us that Joseph will bring about much-needed change. How right he was. Joseph made a change, a big one. He changed Malta from a respected member of the European Union to the ‘corrupt island in the Mediterranean.’ We had a respected statesman as a prime minister and we replaced him with the most corrupt politician in the world. How’s that?

What other changes did Joseph Muscat bring about? Honestly, I cannot list them all as this would be a very long read. But let’s name a few: the selling of golden passports with kickbacks paid to Keith Schembri; ministers listed in the Panama Papers; scandals in Enemalta’s contracts, with Electrogas and in Montenegro: privatising three public hospitals; giving precious public land to the abortive American University of Malta; licensing Pilatus Bank; giving himself Australia House.

Yes, Joseph did bring change to impunity for criminals and, as Alfred Sant used to call them, to ‘friends of friends.’ Joseph Muscat changed how the media is treated in Malta. A fellow journalist of Mr Cunningham was blown to pieces because she criticised the government and exposed corruption.

I am not quite sure if this is what he meant when he made his statement on the need of change.

Previous:The chaos at the top
Next:MONEY MAGAZINE: At your financial service