GUEST POST: “So the environment truly becomes a priority” 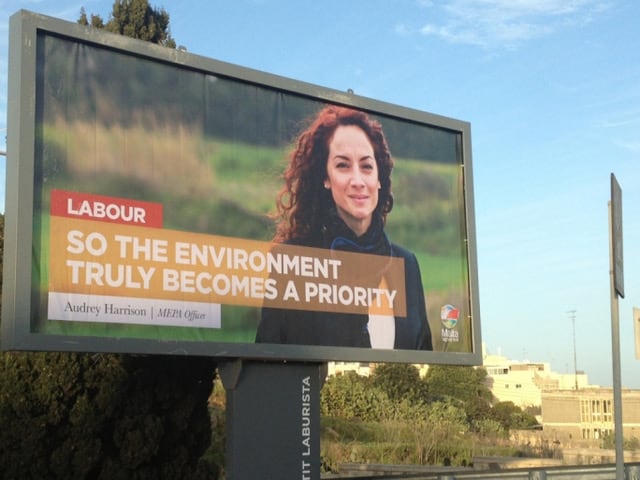 Hundreds of billboards placed a every strategic corner throughout Malta were important features of the multi-million 2013 Partit Laburista election campaign. Labour had money, lots of money. Anġlu Farrugia, today’s Speaker, spoke about big contractors and businessmen at the infamous 4th floor at the glass castle of Ħamrun. To give credibility to the messages, Labour used well known personalities who approved of their name being shown on the billboard.

‘So the environment truly becomes a priority’ was one of the series. I do not know if Audrey Harrison thinks her ambition has been reached. During Ian Borg’s tenure as lumberjack-in-chief thousands of mature trees were chopped down to make way for wider roads and thoroughfares. Wherever there is green, let me lay grey, Ian Borg prays.

Rampant development outside zone testfies to the prioritisation of the environment for Labour. The hidden fly-over in Mrieħel to facilitate Gasan and Fenech’s high risers is an example. More arable land will be turned into concrete and tarmac. More trees will be chopped down. Ian Borg will tell you that they are planting saplings to replace hundred-year-old trees. Even President Emeritus Marie Louise Coleiro Preca and former MLP leader, now MEP, Alfred Sant criticised the project. The latest news is that the PA has received another application for the construction of flats and garages in fertile fields in Nadur, Gozo. There are rabbit holes for people to live in propping up in every available space, however awkward, all around Malta.

Malta has the 3rd worst air pollution records in the European Union and most of it comes from cars, which is no wonder seeing that 73 new cars are added to our roads daily. Some call it progress. In 2019, Eurostat recorded Malta’s population having Europe’s highest rate of reporting exposure to pollution. The EU average is around 14%. By contrast, over 26.5% of Maltese complained. The ever-increasing amount of cars clogging the roads, the deafening noise of jiggers from 07.00 to 18.00 hrs digging in urban areas and dust, so much dust, are choking the island, with air pollution causing asthma and lung cancer.

The European Environmental Agency reported that death from respiratory causes has increased to 600 early deaths due to air quality in Malta are more than twice as high as previously thought.

Research published in the European Heart Journal used new data on the health impacts of air pollution to estimate that about 800,000 people a year across the EU die early and that the average person loses two years of life. Malta’s figures – which compare to previous estimates of between 250 and 270 early deaths for the same period – are worse than the EU average.