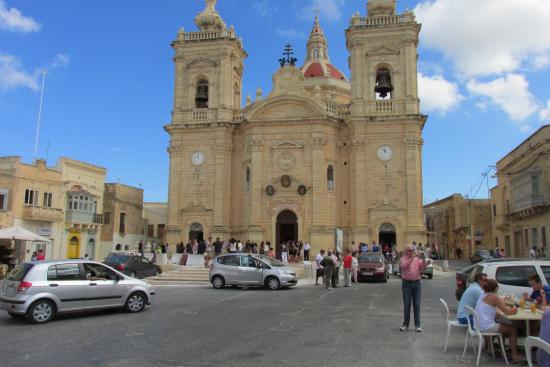 Two priests were arraigned in Gozo’s court today charged with sexually abusing a minor in their care. The arraignment was anticipated with a curtain-raiser as the newspapers were told about this a day ahead.

Reading the reports of the evidence given by the victim is heartbreaking. These predators took away his childhood, his health and his will to live. They have also robbed their church of its reputation and their colleagues of their good name.

I think original sin is an abomination. And I think collective guilt is illogical and unjust. But clearly, we don’t just have an abusive relationship between two adult men and a child here. We also have an imbalance created by an institutional relationship between priests of an organised religion and children entrusted in their care precisely because they are priests.

There is nothing in the fact of being a priest that gives anyone the predilection for child abuse. I was an altar boy for many years as well, and my parents entrusted me in the care of several priests during my childhood. None of those priests abused me. When I was sexually abused in my minority it was at the hands of someone who only went to church to play the organ.

So a balance needs to be found here. Saying that it is unfair to brand all priests with the misconduct of the worst among them, though entirely correct, is no case for the defence of the church as an institution. Individual victims deserve justice and justice is not only obtained by having the priests stripped of their collar and, hopefully, serving some jail time.

A child who has had their childhood, their livelihood and their health taken away from them deserves some form of restitution to go some way in compensating them for what they have suffered. Here the buck cannot just stop at the individual rapist bastards who perpetrated the crime.

These priests abused this child because they wanted to. But they did it also because they could. Because they operated in an organisation that gave them the authority and influence they abused to pursue their sexual depravities. That authority and influence secured the child’s trust and the trust of his parents. It ensured that people who could see the signs became blind to them instead, preferring to mistrust their senses over mistrusting their priest.

I mean, how exceptional can child abuse in the church have been if one victim had the statistical misfortunate of having been molested by more than one priest? And while on the subject of unlikely coincidences remember that the Fr Sultana from Xagħra arraigned today is not the only priest with child molesting allegations to his name. There is, believe it or not, another Fr Sultana from Xagħra with similar stories to his name.

The angry mob on Facebook making the illogical inference of a taste for child abuse from the priesthood is not justified in being irrational. But its anger is understandable.

The church now does much to address this old problem. Today the Gozo Curia issued a statement calling for justice and saying some appropriate words. But that statement doesn’t answer one question I submit is very important. Who knew what when? Gozo is not enormous. Can the bishop, and more to the point his predecessor who has since been promoted to HQ, tell us when they found out about these allegations?

This is not just about defrocking priests with a habit of taking their frock off in the presence of their victims as quickly as their crimes emerge. It’s also about what these evildoers are allowed to do to escape justice once they’re discovered.

The church has developed structures that ensure that action is taken and the police are brought in. But I was dismayed to read in the court reports of this morning how one of the accused actually used the church’s structures to avoid the consequences of police action.

The accused’s lawyer was arguing for bail for her client. The prosecution pointed out that on 12 January the accused wrote a letter to the victim. The implication in the prosecution’s argument is that the accused was trying to condition the victim before the victim gave the evidence he delivered in court today.

The accused’s lawyer said no law had been broken. Her client hadn’t been charged yet so there was no court order to keep away from the witnesses.

True. But get this. The accused knew the police charges were coming because he knew the church was acting. They had already taken away his license to say mass. He had been disciplined and he knew full well the rules of his church include passing the case to the police.

Under the cover of those ecclesiastical proceedings, he approached the victim, renewing now by the mere fact of reaching out to him the threats he gave him as a child of consequences if he didn’t submit himself to his wishes.

The other child-molesting Fr Sultana of Xagħra also sought through another priest to negotiate some form of settlement that would have his victim keep his dirty secrets for him.

I see that and I do not just think of the iniquity of evil men. I also see a church that is too slow, too flummoxed, too paralysed by all it has to lose, to find ways of stopping its own people from inflicting the worst possible hurt on the most vulnerable members of their flock.