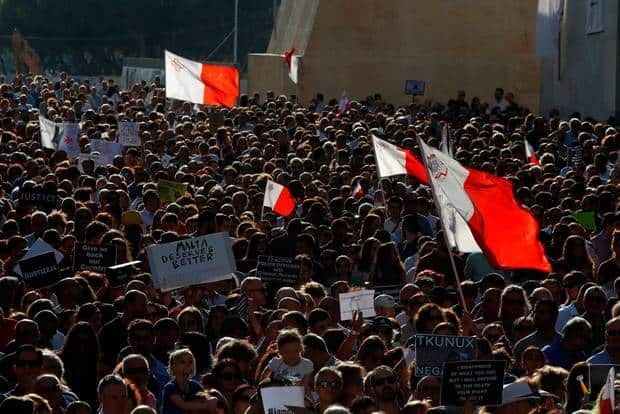 The prognosis of the islands’ maladies overlaps from the functionality of government onto the people. In an absence of a credible alternative, citizens opted to conform with the regime in exchange for mass consumerism that some describe a trickling economy. All in the name of the “common good”.

This now time-honoured “white-grey-darkest of blacks” economy, founded on as yet partially alleged transgressions including deeply rooted bad governance, untruths, corruption, money laundering, impunity and psychological and physical violence, has now permeated all strata of political society that is the process by which the interests and values of civil society are articulated and aggregated for action by government. This includes parliamentary deputies, the civil service and public sector, private and public institutions and of course the “represented” in a supposedly representative democracy.

A few years back the National Audit Office discussing government concluded: “closing an eye when it comes to adherence to regulations and procedures is all well and good as long as people’s expectations are satisfied.”

When influential powerful moneyed elites join cohorts with government, it is only expected that they consistently demand their pound of flesh in their mission towards greater profits; hence regulations need be bent to accommodate dubious “arrangements”. Why should this not apply also to the average citizen, who can barely make both ends meet, and he/she too dips a finger in the pie even if this tarnishes one’s social and convivial behaviour in an otherwise principled community?

The signs that something is seriously wrong in societies are myriad: an unprecedented degree of polarisation; a bitter debilitating culture war; the erosion of the bonds of civic amity and emergence of a civic culture animated by mutual hatred and contempt; the seeming loss of any notion of an overarching common good to which private interests must be subordinated and resultant understanding of politics as a zero sum game; a pervasive cynicism and growing crisis of legitimacy; and what might be called “gridlock” where in the fragmentation of the body politic into a plethora of competing interests whose conflicting and ever-escalating demands induce something akin to political paralysis. Such is the opinion of political sociologist Kenneth Grasso (2020).

The problem of Maltese citizens today is their fear to start believing “living into the truth”. Truth is best sprouted in the notion of civil peace.

Describing and interpreting civil peace can be elusive. In Malta’s current socio-political context, it is not the case of discussing an armed onslaught against an illiberal regime to overwhelm its “evil” acts. Even if the misfortunes and sufferings of citizens due to pride, injustices and wickedness of the powerful legitimises this mass of servitude to overwhelm “evil”.

Discussing people’s unity could just be a façade concocted by the powerful to alienate a well-meaning society that again today is a mass of servitude and iniquity. It is with all the good intentions too that now the President of the Republic will be convening a State of the Nation conference. Having crossed paths with his Excellency, then Minister for foreign affairs 1996-1998, my impression was that of a cautious diplomat, a good mediator and, indeed, a gentleman. Still he had a political role to play.

The endeavours for citizens to maturely appreciate who they are and what their thinking is can only be understood if he asks his troupe to explore the state of civil peace on our islands. “Peace” could be reverberating in his mind; he mentioned it discussing the conference on state channel.

Philosophical political thought, resorting to empirical theory, could refer to civil peace as corresponding to the great endeavour of free human progress where respect and recognition emerge spontaneously while we live in accordance with everyone’s own experience of renewal and truth within a common acceptance of the essential reasons of freedom, respect and dialogue. To these desiderata I would consider adding “benevolence”, that includes justice.

It is left to the reader to conclude if indeed our society’s existence thrives on freedom, respect and dialogue.

While political parties programme their thinking and actions with the objective of winning votes to gain access to government, our active civil societies organisations generally indulge in dissent to government, opposition parties and individuals. This is the forte of their neutrality; but this too has limits in a state of emergency. It need be said their non-violent resistance has paid dividends and the proposals towards improvements in the field of constitutional governance is a sign of commitment. I may not agree with all proposed, but each of us, irrespective of our thinking, our aspirations, and our actions, forming part of one community, can working together each in his own way reach remarkable heights.

And yet in this present scenario, briefly described above, CSOs need to start believing that they have a role in promoting and joining in “negotiations” together with the rest of the body politic by way of enabling a thorough sustainable reconciliation among divided societies. CSOs, inclusive of all groupings and irrespective of each specific interest, need to develop a platform that focusses on a mature discussion with political parties, private and public institutions and citizens in general. It need be recalled that civil society convinces itself that it is the representative of our citizens’ sovereignty, while our political parties are the valuable asset vehicle for the actuation and materialisation of the country’s common good.

A positive element of this current pandemic is the realisation that solutions can indeed be found through concrete and mature dialogue and deliberation amongst all civil society groupings and political parties. It is reality that often democratic politics becomes more an arena for the assertion of conflicting interests than the building of common purposes. It is one other reason why civil society organisations and constituted bodies need to demand a greater, but reasonable, share in the decision-making process.

The country’s opposition is responsible to mind and resist government’s “closing civil society spaces”. Open civic space is characterised by freedom of association, peaceful assembly and freedom of expression: civil society depends on these three key rights. It is only recent weeks that the Commissioner for NGOs tried to exercise his presumed politically-contaminated power to practise “closing spaces” for CSOs.

CSOs have a legitimate right discussing politics and dissenting bad governance, but their priority shall be the well-being and the common good of citizens. It is acceptable that same keep a seeming independence from political partisan politics. But they need also resign themselves that parties are a sine qua non in a representative democracy.

The role of civil society is disparate from that of political groups and hence they have the onus of striving towards a resurgence of the notion of civil peace based on the essential reasons of freedom, respect and dialogue. The proposition of developing consensus lies with civil society organisations.