Not kickbacks. Not nothing either.

In his effort to keep Labour on side, Keith Schembri announced hours before his arrest that a magisterial inquiry found no proof that payments he received from Brian Tonna at Pilatus Bank amounted to kickbacks on the back of the sale of passports.

Today the police testified in court that the magistrate had not found evidence that the payments Keith Schembri received from Brian Tonna at Pilatus Bank were kickbacks on the sale of passports.

But the police provided the court other information from the inquiry findings that Keith Schembri conveniently left out.

First. Brian Tonna transferred commissions on the sale of passports to his BVI hide-out, Willerby Trading. He did that to dodge tax. He laundered the money so he wouldn’t need to pay tax on it. And he manipulated the accounts to cover up what he was doing.

Second. Brian Tonna paid Keith Schembri €100,000 in a Pilatus account. The trail does not definitively explain the payment as kickbacks on the sale of passports. But the payment came out of the same BVI account where Brian Tonna stashed his income from selling passports.

Third. Brian Tonna and Keith Schembri justified the €100,000 payment as the repayment of a loan Keith Schembri extended to Brian Tonna during his divorce. The inquiring magistrate and the police did not believe this. Because the documentation about the loan was only drawn up after the FIAU asked Pilatus Bank about it. And because Brian Tonna had liquid cash coming out of his ears and he didn’t need the money.

Needless to say, Brian Tonna and Keith Schembri deny any wrongdoing. They would now, wouldn’t they?

If, however, Keith Schembri left you with the impression that he is facing criminal proceedings about “things that happened in 2010” “taħt Gonzi” and limitedly as a result of the inquiry into the Allied Newspapers affair, he has managed to mislead you once again. It is not true that the inquiry on the passports’ kickbacks drew a blank.

But there’s something else here. The evidence confirms that as a passport-selling firm, Nexia BT administered the business criminally. They manipulated accounts. They channelled payments illicitly. They behaved like proper crooks. 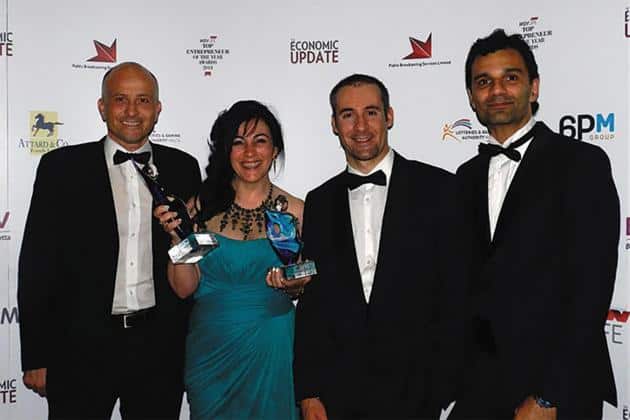 Look at this picture (from 2014) which I first saw accompanying this Times of Malta report from last September. The three men in the picture are Brian Tonna, Karl Cini and Manuel Castagna. They’ve been sleeping in Kordin these last few days as the court begins to hear evidence of criminal activity against them.

The woman in the picture is Anita Aloisio. She used to be their partner until 2017. There is no suggestion that she is directly involved in the criminal activities her former partners have been charged with. We can only presume that in the years 2014 to 2017, while her partner was siphoning off payments charged on the back of a government scheme to a coconut island in the Caribbean, and while their firm was paying their staff extra money in cash, she never suspected anyone was doing anything wrong. Right under her nose.

Her job right now is chairing the board over-seeing the government agency that sells passports.

That’s how we tell the world that our passports selling scheme is above reproach and that the people with the job of keeping crooks out are as sharp as the polished edges of diamonds and as committed to transparency and good governance as platonic philosopher kings.

This is why Alex Agius Saliba at the European Parliament today screamed from the top of his lungs that he’s proud that Malta’s institutions work. He never said what at.