Since I have been told many times by the trolls that infest our social platforms that I need to ‘get a life’ because I am not a ‘mara simpatika mingħajr pretensjonijiet’, I decided to spoil the little life I’ve got and sit through the prime minister’s appearance on troll-central’s favourite television channel this morning.  I don’t know why it took him till the morning to emerge after yesterday’s momentous events that saw his predecessor’s wing man put in the slammer. I bet he needed to lie down after a major dizzy spell. Or maybe he needed to get his ducks in a row. Reader, you will see that it is the latter. 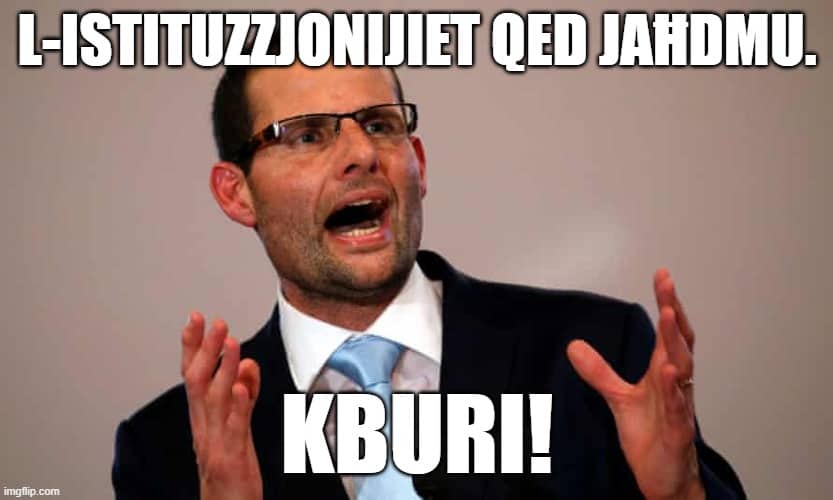 Joking aside, it is very telling that Robert Abela chose to remain silent yesterday. It was a watershed moment in this country’s history, no matter one’s stripes, and it merited a presser by the leader of the country. But then, to be honest, the leader of the country has been in jail since November 2019, so giving a press conference while you’re waiting for one of your buddies to join you in the clink would create some scheduling problems in Yorgen Fenech’s prison social diary.

But I digress. For those thinking ‘what’s the big deal that Abela spoke about yesterday’s events this morning’, let me remind you of the alacrity with which he called a press conference, barely one month into the pandemic, and at prime time to boot, to lead a lynch mob against Repubblika for having the temerity to demand answers from his government about the plight of migrants stranded between sea and sky. This tragedy was eventually called the Easter Massacre by the international press.

It’s not that Abela and his scriptwriters (I use this term very loosely) needed time to come up with a statement. As we saw this morning, all they needed was to wheel out the usual platitudes of ‘the institutions are working’, a bunch of whataboutisms and a few wooden gestures that would make Pinocchio proud.

Abela sounded like a troll, didn’t he? That was the sharp observation of a dear friend and activist who had decided to get a life too. The only motivation behind this morning’s appearance by our troll in chief is to arm his troll army with a new narrative. And lo and behold, the little elves got to work including the Big Troll himself, the 2019 Person of the Year for Corruption and Organised Crime. Din hija l-għaqda nazzjonali, għidlu lill-president! Do you get it now why Abela didn’t emerge from his cave until this morning? He was checking in with his master in Burmarrad. That must have been quite a long phone call. Doesn’t it remind you of another night when Keith Schembri spent the night with Muscat in Burmarrad the evening before he was arrested? They’re so transparent we can see right through them. 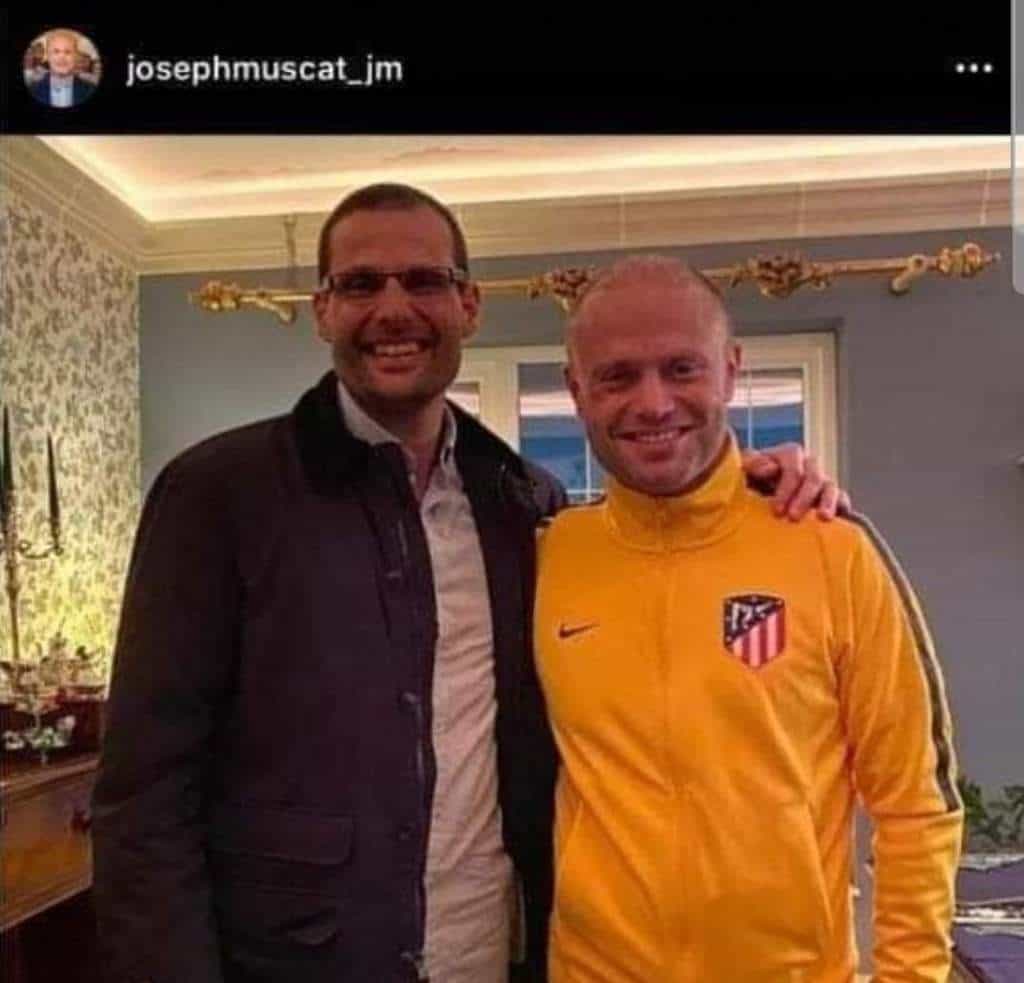 Hang on just a second, reader, don’t you think that Joseph Muscat’s Facebook post is not the usual exercise in bluster and hot air? It was feeble. I could smell the fear. The Artful Dodger must be feeling the heat. There was a festival being broadcast on state TV while the drama was unfolding in the courtroom yesterday but the only singing that concerns him is the one by canaries. It must be tough to be the Muscats of Azerbaijan right now. 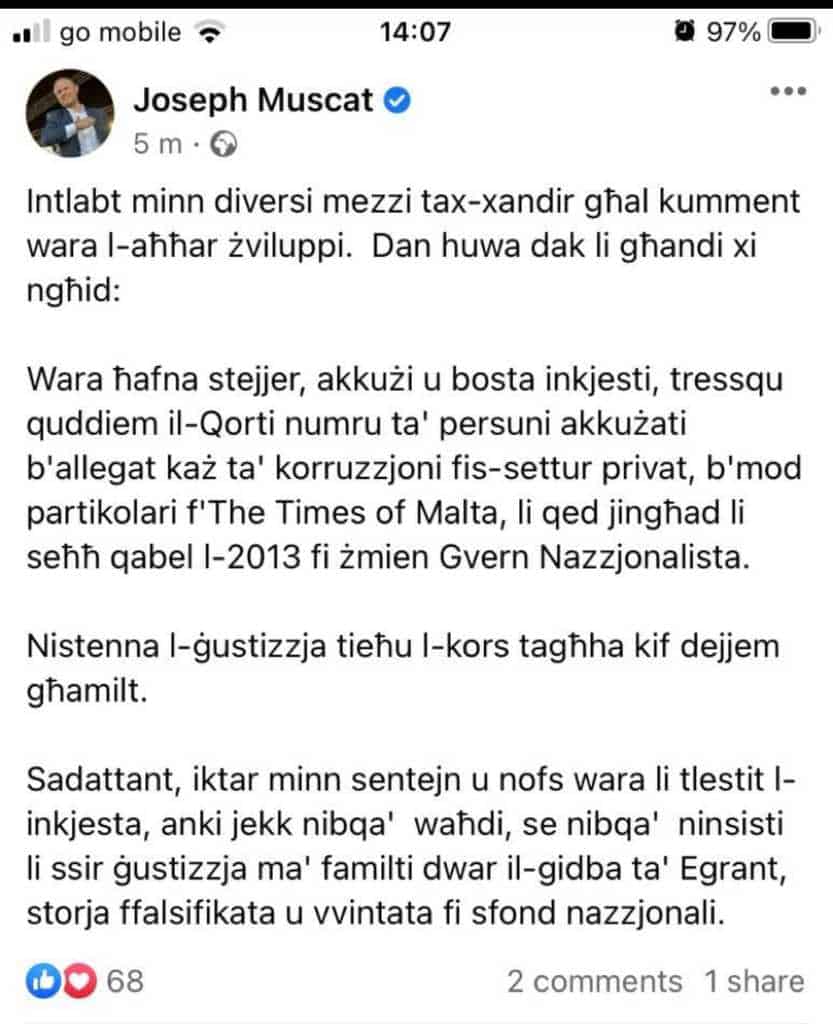 The Continuity Duo can troll us as much as they like but they cannot spoil yesterday for us. While I was watching the, now iconic, footage of Keith Schembri being driven into prison, I recalled another momentous night when Schembri was first released from arrest during that long interminable night in front of Castille. We felt robbed then. We felt vindicated now. Because Daphne was right.

Yesterday felt cathartic. We watched, mesmerised. We couldn’t believe our eyes. Some of us clapped, jumped up and down, slapped tables, startled pets. Had a drink (or two) and toasted Daphne. Some of us cried. I know I did. I cried for a life that was taken before she could see all this unravel.

Daphne would have smiled at all the women who seemed to take centre stage yesterday.

The assistant police commissioner Alexandra Mamo, the head of the Economic Crimes Unit, who, contrary to her predecessor, didn’t sleep on the files, but went after some holy cows without fear or favour and arraigned them;

The magistrate, Charmaine Galea, who, if truth must be told, as is expected on this blog, wasn’t expected to deny bail, but she dug her heels in and parried all the arguments from the defence and did what she thought was best;

The formidable state prosecutor Dr Elaine Mercieca Rizzo, who wouldn’t take drama from the defence and told Schembri’s lawyer: ”This is not ‘the justice of Keith Schembri’. It is the same justice for  all”. Did you whoop? I did!

The woman who shouted ‘Daphne kellha raġun’ as Schembri was being driven (by a woman!) into Kordin. How many times have we shouted ‘Minn Kastilja għal Kordin’ these past three and a half years? That woman represented each and every one of us. And we cried with joy and sadness. The tweet of the footage posted by Repubblika on our twitter account went viral. Maybe it’s because we are watching it on a loop.

?A woman shouts “Daphne was right!” as Keith Schembri, the once powerful chief of staff to Joseph Muscat, is driven into prison after he was denied bail for corruption uncovered by #DaphneCaruanaGalizia. It’s a start. And we’ll take it.#JusticeForDaphne #TruthNeverDies pic.twitter.com/WxHLNGKL0v

Daphne’s sisters. Her wonderful, stoic, brave sisters who sat in the courtroom throughout the marathon sitting. Who sit in the same room as the men who vilified their sister, who killed their beloved sister at every court hearing for months on end. The ongoing lessons this family is teaching an ungrateful nation are invaluable and lasting.

Daphne’s mother, Rose. The gentle, soft spoken lady, who bears her unimaginable grief with such dignity. She must have been sitting at home with her husband, Michael, by her side, following every detail, every twist and turn until that magical moment when Schembri was driven to prison.

And lastly, Daphne. Brave, fierce Daphne. She was foremost on everyone’s mind yesterday. We couldn’t help but think what she would have written, how we would have refreshed her blog to get her unique take on things. I had  the same feeling as the day Daphne was killed. I recall driving on auto pilot that day to Tarġa Gap and I saw the lights and the white tents and the men in white and I remember thinking ‘I can’t wait to go home to see what Daphne has to say about this.’ But she couldn’t tell us.

Who knows what Daphne would have written yesterday?

She can’t tell us. But we can. So when Robert Abela goes on television to try to fix a narrative that Keith Schembri is no longer part of the Labour Party, that the institutions are working and the usual dirge and lies, we must rebut them with force. We must push back. We must not let them have the last word. We must protect Daphne’s legacy.

Keith Schembri is still an integral part of the Labour party, YOUR Labour party, prime minister. He might no longer be chief of staff, but his influence, and his men are still embedded in your party, in your government, in every institution of this country. Have you seen the pathetic love letters to Keith Schembri written by men babies in your party on Facebook today? Honestly, they make you want to gouge your eyes out with toothpicks.

You are prime minister now. But you were an adviser to the Muscat administration, and so you cannot just stand there and dismiss Keith Schembri as if he were an annoying temp who was caught stealing office supplies. Please.

You said that yesterday’s events mean that the institutions are working. What yesterday’s events mean is that the wheels of the institutions are creaking, in spite of you. Don’t you dare take the credit for what happened yesterday, prime minister. Yesterday was possible because of the drive and determination of a small number of people: first and foremost, Daphne’s family, Simon Busuttil and his tight team of collaborators (fhimtu Adrian Delia u David Agius?), and a small band of civil society activists who never gave up even when we were called all the names under the sun. We’re quite partial to ‘erbat iqtates’, though.

Do you want to show us that the institutions are working, prime minister? How about taking action over Vince Muscat’s shocking claim that one of the ministers in your cabinet was involved in a ‘big story’ a decade ago? Eh? Eh? You’re big on the talk, but not so hot on the walk, aren’t you?

Since yesterday was all about Daphne, it’s only fitting to end with one of her quotes:

‘What we see here is institutions designed to protect the citizen against abuse being corrupted instead, by an enmeshed web of interests in which everyone involved has a stake in no action being taken while criminal behaviour carries on unabated.’

This is still the case, prime minister. Yesterday was not about you or your continuity government that is so bogged down in filth that it has ceased to function. So stop speaking like a troll and start acting like a leader instead. (We can dream).

If you can’t, won’t or are not allowed to, we will continue what she started anyway.

Because Daphne was right. Deal with it.