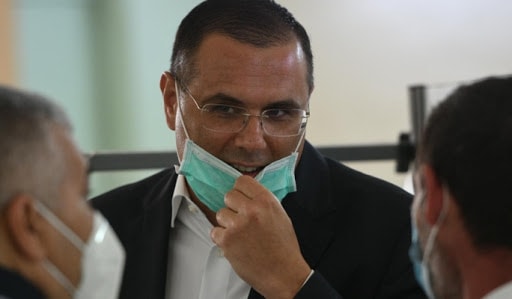 Ian Castaldi Paris thinks it’s unfair that a Facebook post he wrote two years ago giving a metaphorical public blow job to Keith Schembri is being circulated again now, as if he had just written it.

He doesn’t get it, does he? 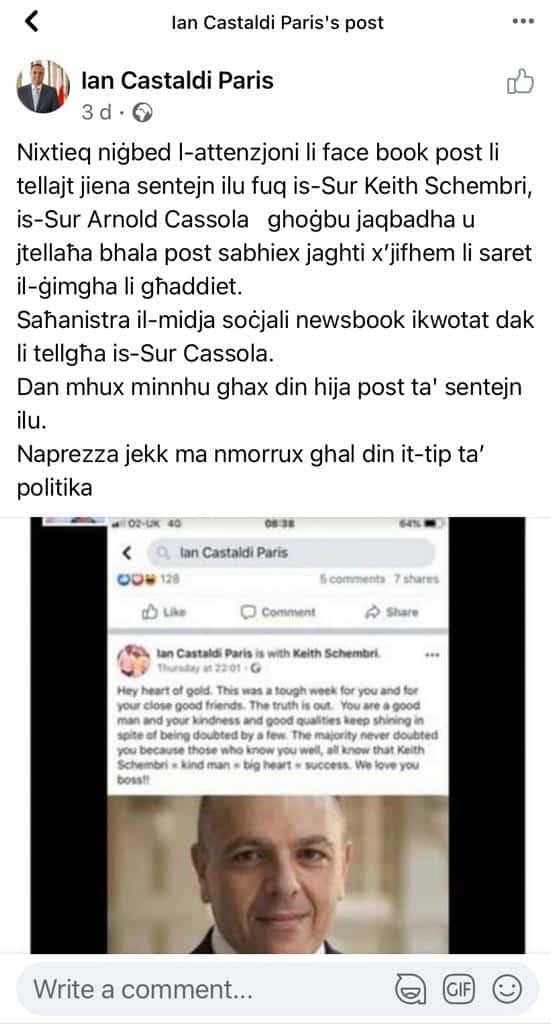 In other words, while we were calling for Keith Schembri to be fired and investigated, Ian Castaldi Paris and the Labour Party protected and enabled him. They made sure he could continue his criminal activities with impunity.

There’s no applause for distancing oneself from Keith Schembri now. The police are providing details of the mechanics of the fraud, forgery, tax evasion and money laundering. But the wrongdoing has been in the public domain for years.

Ian Castaldi Paris and, frankly, everyone else in the Labour Party, have a responsibility for having brought Keith Schembri to power and for having kept him there. The only thing that could have absolved them is to have done what Marlene and Godfrey Farrugia did when they realised what was happening around them: to walk away and denounce the wrongdoing, distancing themselves from it, sacrificing their political career in order to retain their integrity.

Ian Castaldi Paris may wish to look up integrity in a dictionary.

If more MPs in the Labour Parliamentary group stood up to the corruption when it was spectacularly exposed in 2016 and 2017 they would not have needed to leave the Labour Party like the lonely Farrugias did. Of course, even then was somewhat late.

In 2013, Anġlu Farrugia knew all about the “fourth floor” of the Labour headquarters. He spoke up because he felt slighted when he was forced to quit the party’s deputy leadership. But he forgot about it all when he was bought off again by Joseph Muscat.

But let’s allow for the fact that in 2013 they may have been so keen to throw out the nationalists, they would have done nothing to endanger their prospects of election. They had no excuse in 2016, barely half way through their first term. They could have; the should have done something then.

They should have thrown out Joseph Muscat, Keith Schembri, Konrad Mizzi and Chris Cardona, apologise to the public for not realising before what the crooks had been up to, explain what they would do to avoid a repetition, and contritely rebuild a relationship of trust with the electorate.

Instead, they facilitated the elimination of the only people challenging the criminals: Simon Busuttil’s exile from politics and the killing of Daphne Caruana Galizia. And they still sit back and watch civil society campaigners isolated and their act of protest criminalised.

Ian Castaldi Paris insists we should not go down “this way of doing politics” by circulating the image of his semen-stained lips from two years ago. He wants us to do what he did for Keith Schembri. He wants us to cover up for him and for all the enablers that kept Keith Schembri in power.

Ian Castaldi Paris may have thought Keith Schembri had a “heart of gold”. Bloody hell, he hasn’t said he doesn’t think so any more. But he’d better believe we don’t have a “heart of gold”. We’ll hold him to account. His party must answer to the public why they’ve done this and what they’re going to do to atone.

And if the public is slow to realise that a majority within it still applauds being robbed by the people it trusted, we’ll be patient. Labour can win as many elections as it can manage. But one day, as Keith Schembri probably must have realised at some point staring at the ceiling of his prison cell, voters will realise what happened and hold the Labour Party to account.

Previous:How they took the old lady
Next:Gaming industry laments “loss of business, impact on reputation” because of corruption and collusion