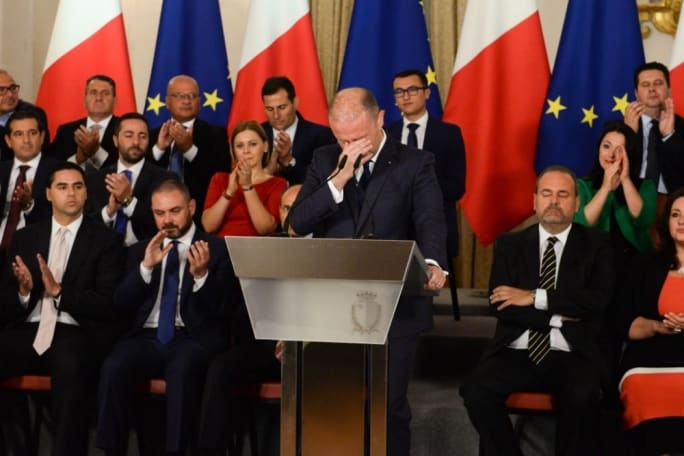 No one in the Labour Party doubts that between 2008 and 2013 the entire infrastructure of their movement was turned into a glove for Joseph Muscat’s grabbing fist. They didn’t need to see Keith Schembri – the man they called the boss, the mastermind, the genius strategist – arraigned, charged and remanded in custody to understand that.

In spite of all the obtuse deflections – like the one they have just come up with that Keith Schembri fucked over the Times of Malta when Lawrence Gonzi was prime minister so there, it must be the nationalists’ fault – they understand more than they let on.

They have understood a long time ago that they have been used by Joseph Muscat, Keith Schembri, Konrad Mizzi, Chris Cardona and many others not in pursuit of some public mission of service but for profiteering and the satisfaction of the impulse of greed.

First they used them to put themselves in a position which they could use to steal. Now they want to use them to keep themselves from a position of having to suffer consequences.

In this context witness Joseph Muscat’s line: “The Nationalists do not want justice. They just want revenge because I beat them at elections.” Joseph Muscat still coordinates his lines with Keith Schembri like they did when they shared an office in Castille. Just a few days before him Keith Schembri said the charges he is facing are the revenge of “the Nationalist establishment that can’t stand the fact that he defeated them at elections.”

This is too familiar not to be understood. In power they enjoyed impunity, sanctioned and shielded by the “erbgħin elf, ħi”, the mobilisation of frenzied partisan support. Policemen, prosecutors, and magistrates couldn’t reach them even if they wanted to because of the statutory power they enjoyed, but more importantly because of the intimidating force of an angry political majority.

Now that they’re no longer in power they no longer have implied official immunities. Some courageous policemen, prosecutors and magistrates are stepping up, taking huge risks and putting them in the dock where they belong.

The only thing that Joseph Muscat, Keith Schembri and the others have left that may allow them to continue to enjoy impunity is the intimidating power of their support base. They are firing it up as if Robert Abela did not exist.

He doesn’t. Robert Abela is Joseph Muscat’s appointee. Like all of Joseph Muscat’s appointees, he is weak, compromised and indebted to his master for his position. Look at him in the above picture, meekly rushed off his feet by Joseph Muscat’s street corner theatre act, applauding like his life depended on it with Chris Cardona, an out of shot Konrad Mizzi and the heavy but invisible shadow of Keith Schembri haunting the wings.

Robert Abela’s political survival like so many wimps that preceded him at the police, the attorney general’s office, in parliament, Party, civil service and so on, depends entirely on the preservation of impunity for Joseph Muscat and his gang.

Robert Abela cannot distance his Party from his predecessor. He cannot countenance allowing the evidence that Joseph Muscat personally profited from corruption and collusion with Keith Schembri and Konrad Mizzi to be examined without the intrusion that Joseph Muscat secured when he was in power.

Consider the Egrant inquiry. Joseph Muscat said recently that he will not stop talking about Egrant until his dying breath. Guess what, dude. Nor will I.

The inquiry’s terms of reference were drawn up by Joseph Muscat’s Pawlu Lia who sat on the only legal entity that could punish the magistrate conducting it.

The magistrate reported to then attorney general Peter Grech who admitted instructing the police not to look for evidence of corruption because the exercise could prove intrusive. Peter Grech renounced his Constitutional autonomy taking instructions from justice minister Owen Bonnici on the pretext that he moonlighted as Joseph Muscat’s attorney.

The magistrate relied on the evidence given by Brian Tonna and Karl Cini who are now remanded in custody with charges for forgery, fraud, breach of accountancy laws and lying under oath.

The magistrate operated in the shadow of the then unfettered power of Joseph Muscat on whether he would be promoted to judgeship or not.

Magistrate Aaron Bugeja was promoted to judgeship soon after wrapping up his inquiry.

Weigh all this against the fact that in so many respects Daphne Caruana Galizia’s reporting and also specifically information provided by her sources about the goings on at Pilatus Bank proved to be entirely correct and now form the basis of prosecutions in court.

It is only rational that the Egrant file is re-opened, the evidence re-examined and “the biggest lie in Malta’s political history” is dragged in the cold light of truth.

Joseph Muscat cannot have that. Robert Abela will help him cover it up. But if the Labour Party is to be a force for good in the country it must do something about its inexistent relationship with the truth.