The evidence mounts: the mafia’s headquarters are in Castille

Reuters’s Stephen Grey has tweeted that Alfred and George Degiorgio have asked for a pardon to turn state’s evidence as well.

Leak just into me from Malta : confirmed two men accused of planting bomb that killed journalist Daphne have also now asked for a pardon and immunity to testify what they know of involvement of politicians.

The Degiorgios say their evidence is better than Vince Muscat’s because it’s not about things someone else told them. It’s about information they have direct knowledge of.

Alfred and George Degiorgio want to testify on the killing of Daphne Caruana Galizia by naming a former government minister as a mastermind of the murder and naming another middleman involved in the case. The Degiorgio brothers say both persons they mean to testify against have not yet been charged or pardoned.

And the Degiorgio brothers want to testify in another murder as yet unsolved by the police and in other bombings they were involved in. 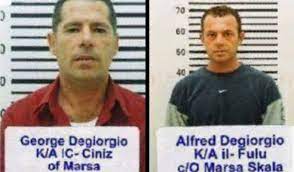 This development comes as the Degiorgio brothers realise Vince Muscat’s cooperation with the police is serving that witness well. They also see that other accomplices that may have made them nervous about spilling beans – the Agius brothers known as tal-Maksar and Jamie Vella – can now expect to remain locked up.

I will not go into the merits of whether yet more cold-blooded serial killers should be getting a pardon to turn State’s evidence. There’s a lot to think about there and first consideration must go to the relatives of the victim, families of victims even, before we rush into speaking about who should or should not be rewarded for murder with freedom.

Intuitively, my answer is that people who killed other people for money should be punished in a way that is proportionate to their crime. People who struggle with their conscience should speak of what they know and must not be rewarded for admitting to their crimes by releasing them on the streets where innocent people live.

Sometimes, immunity from prosecution for some of the criminals is needed to get to the rest of them. But every time that happens the institutions would have taken the easy way out.

Having said all that, the fact is that we now have yet another two potential witnesses, in addition to another two that have already testified, pointing to the filth in Castille. All these criminal turncoats speak up when they have their back to the wall. They crawl out of the most deprived depths of crime. And without any shared motivation they separately, openly and consistently declare that the Auberge de Castille has for the past few years convened ministers who have commissioned and co-ordinated murder, armed robbery and other mafia crimes.

The mafia found its home in Castille. It was comfortable there when Joseph Muscat and Keith Schembri ruled the roost. Now Castille is run by a lawyer who was one of several who handled briefs for the tal-Maksar brothers, the bloody bosses of Malta’s gangland warfare and franchise holders of the international Cosa Nostra. With the cooperation of Parliament’s Speaker, Robert Abela hides the provenance of his wealth. He cannot however hide his proximity to the crime world.

This morning Vince Muscat testified hearing one of the Maksar brothers say that he knew enough to bring down the Labour Party government. Some of the Agius’s contacts in Castille remain unnamed though suspicion falls on Chris Cardona and Carmelo Abela. Both deny any wrongdoing.

They are now charged with murder but the threat to the viability of our democracy because of the way these criminals infiltrated our government is real and present. Our government is run by people with guns to their head held by criminals looking for ways of avoiding life sentences. The mounting evidence shows that at least one government minister in office is under threat of exposure for violent crime. A former minister with a huge hold on the Labour Party is under the same sort of pressure. And the prime minister is one of these killers’ former lawyers.

The Labour Party government has been and is little more than a component, a servant, at times the master of the mafia that has captured our country.

The catastrophe here is that the government’s attempts to survive politically are equivalent to and indistinguishable from the mafia’s struggle to keep a tight grip on our country.

We did not wait for iċ-Ċiniż, il-Fulu, il-Koħħu and other sundry assassins to become our allies before we started this fight against the mafia. And we’re not going to wait for them now.

We turn to all Maltese people of good will. You can’t continue to take this lying down. The criminals must be thrown out of Castille. And we have to be the ones to do it.

Previous:The gift of foresight
Next:A little extra on the side