What happens to Monica Vella now? 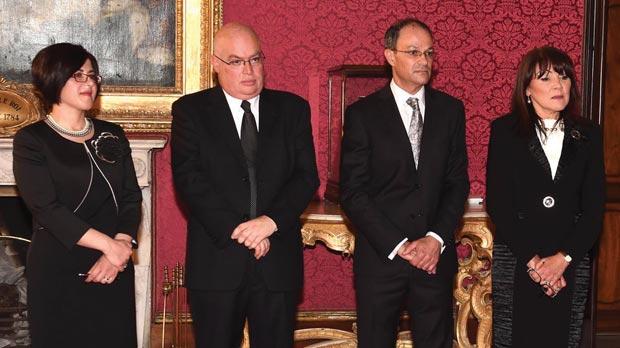 Monica Vella, first left, on the day of her appointment to the bench with Joe Mifsud. Giovanni Grixti and Myriam Hayman were made judges on the same day.

A few days ago, we watched all bemused as the police charged the persons they believe are responsible for the deaths of two tourists decapitated by a tree an open-top bus they were on drove into. The charges were being filed three years after the event happened. Several of those charges had to be dropped on the spot because they were being filed later than the statute of limitations allowed.

At least in part this delay and consequential miscarriage of justice were caused by the fact that it took Magistrate Monica Vella 3 years to close her inquiry into the case.

That must have been the last straw for the Chief Justice who finally acknowledged complaints by several lawyers about the magistrate’s performance. The fact that she worked cases in Gozo also gave a geographic concentration to the consequences of her sloth.

The Chief Justice took her off the Gozo courts as well and transferred her back to Malta where she can cause the despair of a more geographically diverse portion of the population. Needless to say, the case backlog in Malta is bigger than in Gozo. If she’s assigned Malta cases she’s going to slow things down. If she’s not assigned cases and made to gnaw on her thumb in some dark corner, her colleagues will have to work harder to make up for her waste of space.

It’s fair to say that Monica Vella was not made magistrate because she had demonstrated brilliance with her legal practice and that she was handpicked by Joseph Muscat because she was a loyal Laburista who flew her party’s flag at a little village council for 11 years. She was well on the way to become a Dibley caricature when the government called her up to serve in its mission to stuff the judiciary with party loyalists.

Her grotesque inefficiency and her paralytic indecision are in themselves an injustice inflicted on people appearing before her to look for justice.

The Chief Justice’s action to strip her of all her cases and transfer her should rightly be a massive humiliation for her. Surely, she must understand that if she hadn’t been sheltered by the security of tenure she would be out of a job right now. Anyone else would have fired her: client, employer, law office partner.

But wading through the invisible slime of inertia, exerting enormous effort barely moving, is not doing the job of justice. It’s not justice at all.

So, what will Monica Vella do? Will she take the hint from the Chief Justice – which to be fair to the man was as subtle as a club – and resign, leaving the space she’s occupying to someone who can do the job? Or will she just stay where she is, collect her safe salary at the end of the month and wait to be called up to do some other service in the interests of the Labour Party?

If her choice is to go on as if nothing happened, the administrators of our justice system should move to remove her. The privilege of her tenure is not a gift for her partisan loyalty, no matter what Owen Bonnici whispered to her when he promised her a job beyond her capabilities.

Previous:How about the old mentality, Robert Abela?
Next:Asset recovery? You must be joking.