Faced with an inquiry report that damns the failure of State institutions to protect a journalist and prevent her from being killed, Robert Abela’s first speech at a Labour Party engagement is about fixing journalism.

On a morning where it emerges that from a seat right next to him, Edward Zammit Lewis phoned Yorgen Fenech to get his thanks for undermining the judicial process into the 17 Black revelations, Robert Abela thinks the first item on his agenda should be to repair the journalists who risked and in one case lost all for those investigations to begin.

The first item on Robert Abela’s agenda is fixing journalism, the only institution that in the person of Daphne Caruana Galizia at least, was actually doing its job in fighting organised crime.

Journalism has, no doubt, many problems. But the biggest problem it has is that political parties think they are entitled to own it and control it. That, as my experience over the last 48 hours again showed, is a vice both political parties cannot free themselves of. Their selective reading of the inquiry, for example, skips the bits about the undesirability of political party stations thinking they balance each other out.

Instead, as Marie Louise Coleiro Preca put it yesterday, they fan the flames. I would be specific. They spread the lies, inflame the hatred, suffocate the truth, and reduce the complexity of our social condition to black and white, red and blue.

True, there is no equivalency between the two sides. True, One TV is spectacular in its Olympian offensiveness. Also true is that Labour controls public broadcasting which means that an opposition party without a TV station will, as has already happened in our past, have its voice taken away from it.

Labour’s abuse of power to suffocate journalists is documented extensively in the inquiry. They wrongfully mischaracterised Daphne as the political opposition. They successfully drove a wedge between her and everyone else opposing the government. The Nationalist Opposition under Adrian Delia helped the government in that effort, speaking in violent terms about “removing” Daphne Caruana Galizia from the Nationalist Party when she had never been there, to begin with.

Political parties treat inconvenient journalism like a disease they must excoriate.

And in a country where people don’t understand the role of journalists, they get away with it. This too is an observation the inquiry makes. The Board spends time to underline the crucial role of journalism in a democracy and that that role is to be inconvenient, to reveal truths people in power would rather hide.

Consider how grotesquely relaxed the government is about Mark Laurence Zammit quitting his anchor job on the Wednesday night discussion program on national television. They know full well that there will be no public outcry about his departure. There will be no institutions – like the Broadcasting Authority or some fiercely independent editorial board at TVM – that will step in to see why a journalist has been forced to quit because of political interference in the content of his shows.

There will be no professional outrage by colleagues in journalism, especially since many of them are perfectly happy to collect a salary from the government or a political party and pretend for all the world that they are journalists.

And there will be no audience reaction either. Because the audience would rather not be challenged by critical views. “Ħlisna minn ieħor” one of many trolls wrote on Facebook when Mark Laurence Zammit gave up and left. 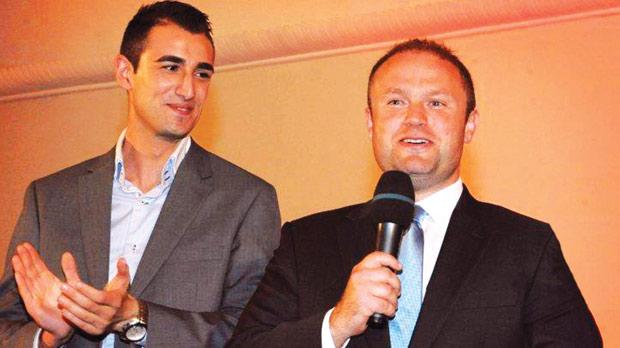 He’s being replaced by Quinton Scerri, a Labour Party politician and Joseph Muscat acolyte, but it’s not likely they will replace Mark Zammit’s show with some Labour-leaning propaganda vehicle. They don’t really need that. They don’t need you to think too hard about how great Labour is because with all that’s going on doubts may set in. They’d rather you weren’t thinking at all.

They will replace Mark Zammit’s show the way they replaced the Xarabank slot, with mind-numbing “entertainment”, the sort that kept good Socialists happy in the Eastern Block when the news would have been too incredible to digest.

They are actually banning all news content from the principal national TV station now, the channel with still the highest audiences in the country. What you don’t know, can’t hurt you.

The people taking these decisions are now turning to fix the journalism that so far does not depend on them. And they will address that component of the model that journalists have no access to. They will provide finance to media owners creating dependencies that will ensure criticism of them is drowned out.

Consider how Saviour Balzan exists entirely at the pleasure of the government. His entire existence is financed by state subsidies paid to him as a media owner producing TV content that ranges from the numbingly unwatchable to sycophantic platforming for the government. Recall “interviews” with Michelle Muscat and Konrad Mizzi whose brazen lies were legitimised by Saviour Balzan’s servile acquiescence. 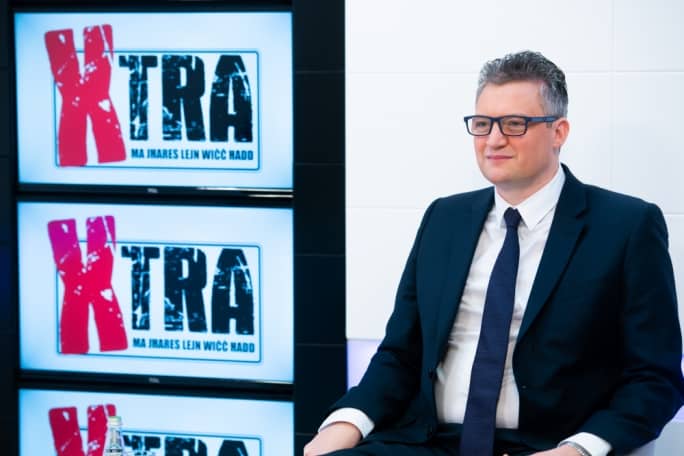 The government wants all journalists to be like that. Or at least it is offering financial survival to media owners willing to turn the journalists they employ to be more like Saviour Balzan.

The rest of us out here, lone wolfs or hobbled-together home-made operations financed with the generosity of a few dozen €4.95 a month-donors, will have to compete with state-financed propaganda the way Times of Malta today tries to keep its nostrils above the waterline while One TV has its staff paid for by the government with person-of-trust salaries and its coffers inflated by advertisers who pay up out of submission to the extortion of power.

What fate in that world for a one-woman Wikileaks, like Daphne had been, working alone?

It is profoundly and painfully ironic that the only reason journalists here today need not fear for their lives is that the project of killing Daphne Caruana Galizia had been so unsuccessful for its perpetrators, for, of course, they did not merely wish her dead, they wished for her death to prevent the exposure of their corruption.

Not that those who enabled and have been found by the inquiry to be responsible for her assassination have had any pangs of doubt about their conduct. Glenn Bedingfield rushed out to deny the central tenet of the inquiry findings: that he, along with others working in his office and his government, enabled the murder of Daphne.

“I enabled no murder,” he says even as he insists he is to be trusted to implement the recommendations of the inquiry he seeks to undermine. 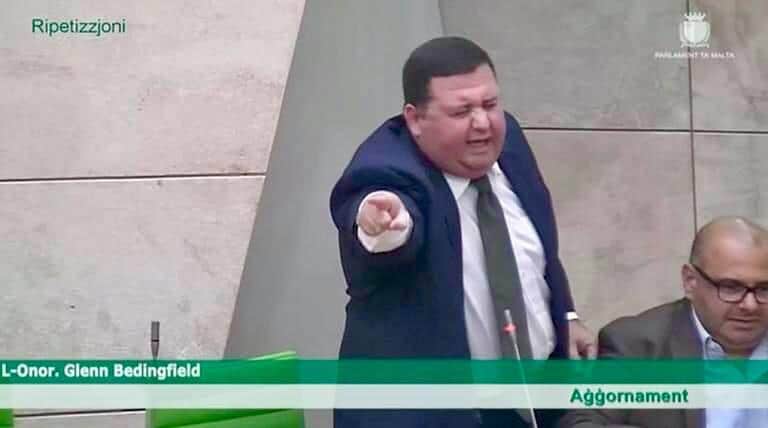 That is not merely saying we face more of the same. The danger is heightened.

Killing a journalist may be unfeasible and that is not because of the inquiry but because many of the people who killed Daphne are awaiting trial. But the harm caused to her in her life to enable her murder is still legitimate weaponry used by the evil forces that actively ignore what the inquiry has said about them and their actions.

The trolling over the hours since the inquiry report was published has been positively exhausting. The hatred spewed on Facebook, the victim-blaming, the death-wishes, and the threats, and the heckles in the street which I have experienced again in the first person, are about as intense as they had been in the days before and after Joseph Muscat’s resignation. If those go on we will be reaching in no time the violent extremes of the hours and days after Daphne was killed. One TV is on overdrive. The targeting of critics, activists, and journalists is nearly unbearable.

It is all so familiar, including of course the helping hand the Labour Party gets from Adrian Delia and Simon Mercieca, and the cover those two get from their political party – the PN – whose prioritisation of self-interest over basic journalistic freedoms is just as irresistible as Labour’s. There are many false equivalencies around. This one is not false.

Someone this morning found for me a quote, a headline from a speech Joseph Muscat gave on 19 June 2016 when Daphne Caruana Galizia was writing about Keith Schembri and Konrad Mizzi and their offshore crimes. “Isolate individuals promoting hate speech”, Joseph Muscat thundered. 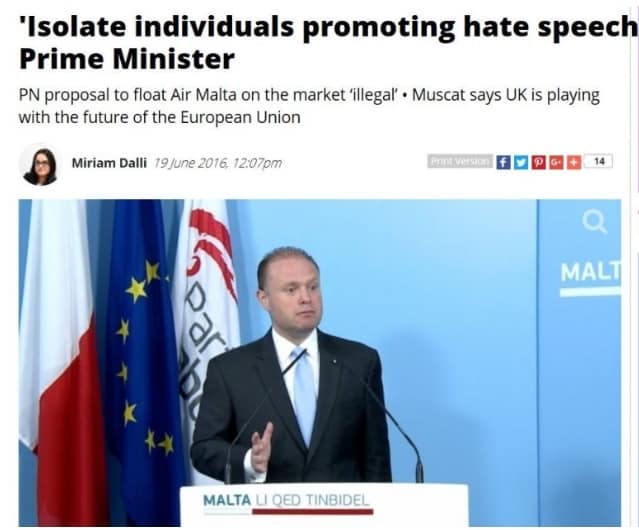 The ‘hate speech’ bit is one thing he chose to call it. It was his projection on Daphne of the hate he had for the truth that would eventually cost him his political life and for which he would pay, as he describes it, the highest political price.

But notice rather the verb: ‘isolate’. That’s how you deal with pesky journalists. Separate them from their audience, sow mistrust in them by citizens, make sure that whatever truth they report nobody is listening because their reputation is too soured in misguided prejudice.

That is the manual, so eloquently and irrefutably documented by the Daphne Caruana Galizia inquiry: isolate. 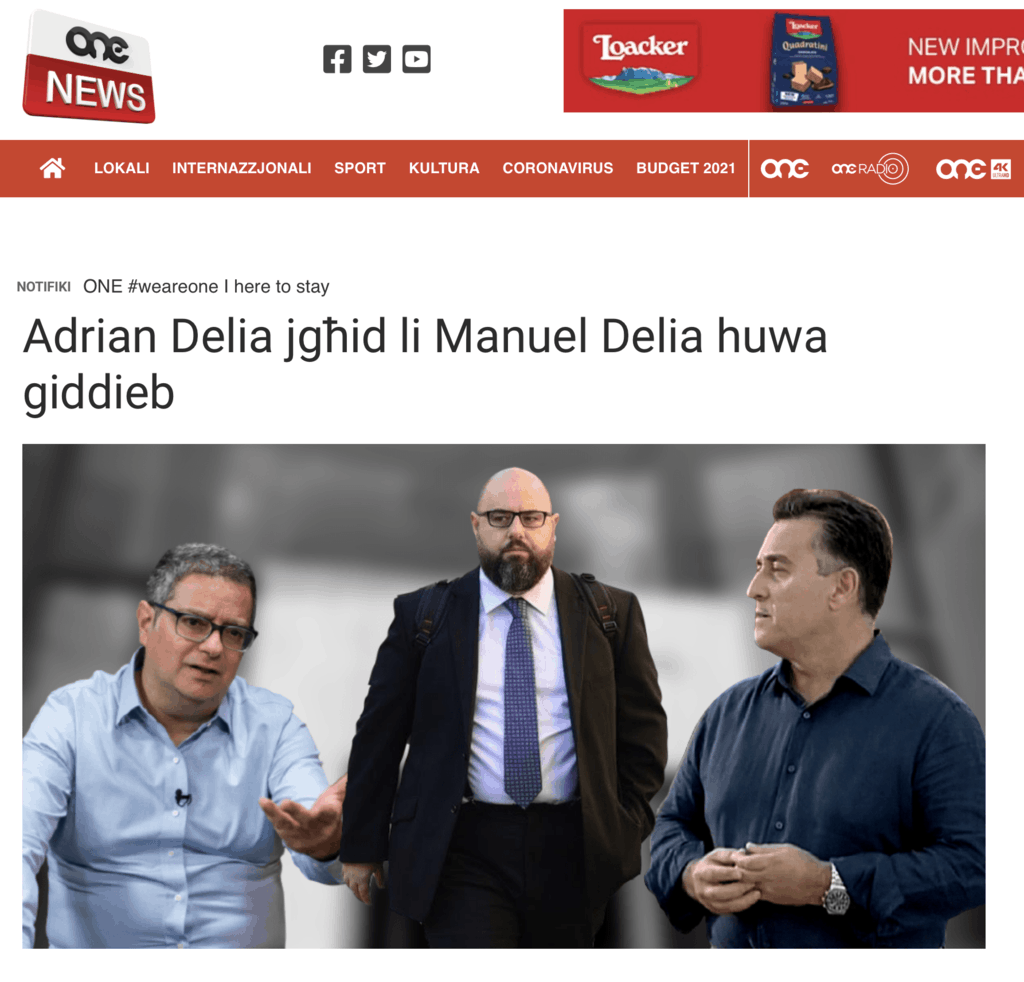 Now look at this headline from One TV: “Adrian Delia says Manuel Delia is a liar”. That’s for a close translation of an inconvenient extract of the inquiry that concerns him. In the composite picture that accompanies ONE TV’s report, I’m stood in the middle of Bernard Grech on the one hand and Adrian Delia on the other. The latter has played Labour’s game since he’s first appeared in politics. The former has been played to do so as well, chasing what he believes to be Adrian Delia’s support base which, he must believe, is more important for him than what I might think or say.

The inconvenient truth that comes out of the Daphne Caruana Galizia inquiry is that journalism needs fixing. And the politicians who brought us to this catastrophic and bloody mess, it seems, are the ones who want to do it.

Previous:GUEST POST: The hero and the villains
Next:I dare you to keep down your lunch