Simon Mercieca probably thinks I avoid commenting on the more outrageous things he writes because the campaign of harassment headlined “Stop writing about Simon Mercieca (and Yorgen Fenech)” has convinced me not to. 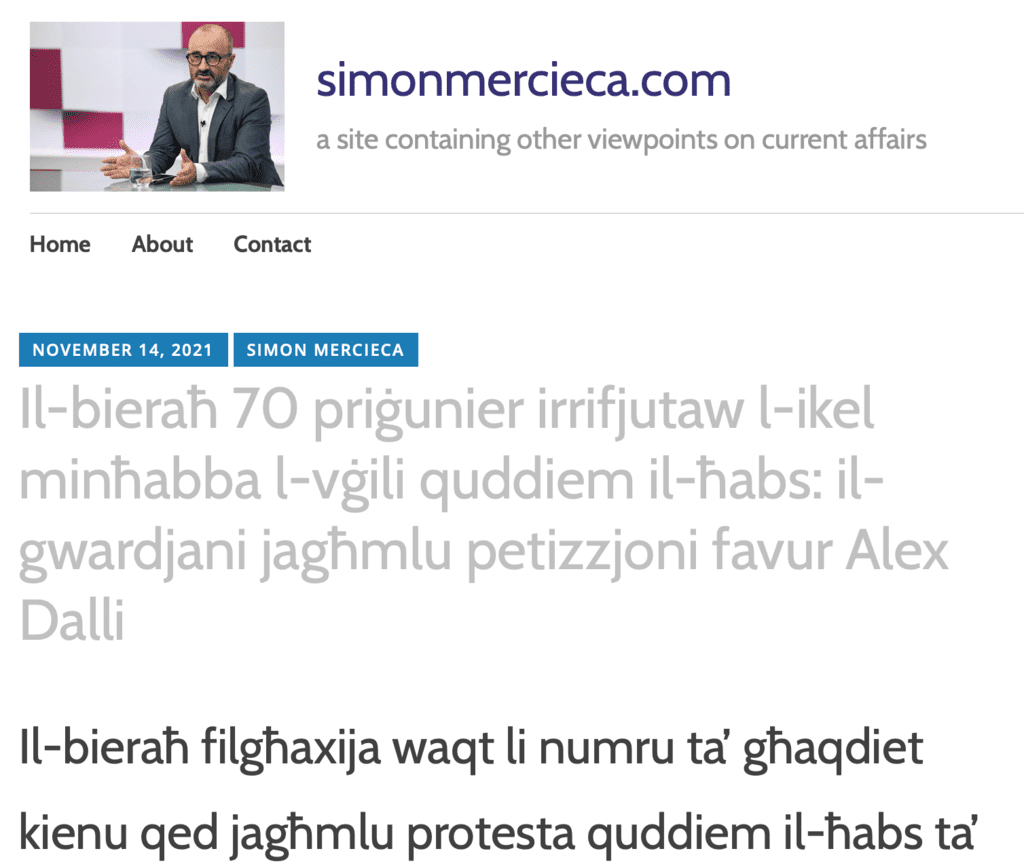 Why is Simon Mercieca a fan of Alex Dalli? It’s hard to know for sure but it is reasonable to deduce they share a fascination with violence, power through fear and force, and a proclivity to fascist fetishism.

Simon Mercieca has received the “self-suspension” of Alex Dalli as some liberal coup in defiance of some natural right that Alex Dalli has of being prison director. The mad professor is writing in support of a so-called petition which is apparently being organised by some prison guards collecting signatures of prisoners who want the mad prison director back.

Apparently, the signatories include a prisoner who had earlier complained of torture when he was tied to a disciplinary chair that is banned under prison rules, the existence of which was at first denied by the government and then acknowledged when photos of it emerged.

There are hunger strikes as well. It is hard to imagine a prisoner killing themselves painfully because a prison director lost their job, even if the prison director was Father Christmas. Simon Mercieca’s own reporting suggests the hunger strike mostly involves eating dinner cold after lights out instead of consuming it at the appointed feeding time of 5 pm.

What’s not out of the question for a fascist is the manipulation of opinions to convince people they enjoy support they don’t rightly have.

There’s more. Admitting that a man who has been submitted to torture is now signing a petition in support of their tormentor betrays ignorance of something as basic as Stockholm syndrome. By his own proud admission, Alex Dalli ruled the prisons with an iron fist, inflicting terror, and fear of violence to pave the way for his unbridled authority.

I argued in this piece when the news of “self-suspension” came out that Alex Dalli’s status as an outsider is by definition temporary. Suspended, means he could come back. Given how he’s been defended for years by the government, it is not hard for guards that owe their jobs and their power to Alex Dalli to convince prisoners Alex Dalli will come back.

Is it so far beyond the realm of imagination for prisoners to sign a petition that they’re told the fear-mongering prison director would be grateful for upon his inevitable return? Is it so hard to understand someone who has actually been tortured by the prison director to want to be on the prison director’s list of people he likes when he gets back?

The reports by Simon Mercieca of petitions and hunger strikes are unwitting confirmation of the lasting effect of Alex Dalli’s cruel regime. They also confirm just what was reasonably expected when Byron Camilleri balked at the umpteenth opportunity (and the moral duty) of firing Alex Dalli altogether.

Alex Dalli’s tall boys in those Running Man uniforms are the scared ones now. If the prison regime transitions into something humane their previous conduct will fall under scrutiny. It is not just that they will miss out on the fun of inflicting pain on their helpless victims. It is not just that they might lose their jobs as they are replaced by staff with a less fire-eating attitude to correctional services. It is also the fear that they might be called to answer for their past behaviour in a courtroom.

Fear goes both ways. Alex Dalli’s messages to his former staffers, whether delivered directly or by complicit errand boys like l-orizzont and Simon Mercieca, is that they need him back. The staffers’ message to the prisoners is that he will come back so they’d best look like they want him to.

Is this beyond repair? No. The chain would break if Alex Dalli was fired and his replacement is given the authority and the status to embark on the complex process of change and humanisation. Alex Dalli’s temporary replacement is being prevented from doing so by the government’s decision to allow Alex Dalli to haunt the prison, if not run it for the time being.

This is a very dangerous time and there are many people with a clear motivation to ensure that Alex Dalli’s suspension looks like a bad idea. He’s itching to take back his little empire and he needs us to think the empire is itching to have him back.

This chapter is far from over.