Oliver Scicluna seems quite disturbed by voters offering him to trade their vote for some favour or other. Though already an MP, by the grace and gift of Robert Abela, Oliver Scicluna now has to go through the grind of canvassing and electioneering to get re-elected, and it seems he’s not enjoying that part of this experience where the democratic process is reduced to horse-trading. 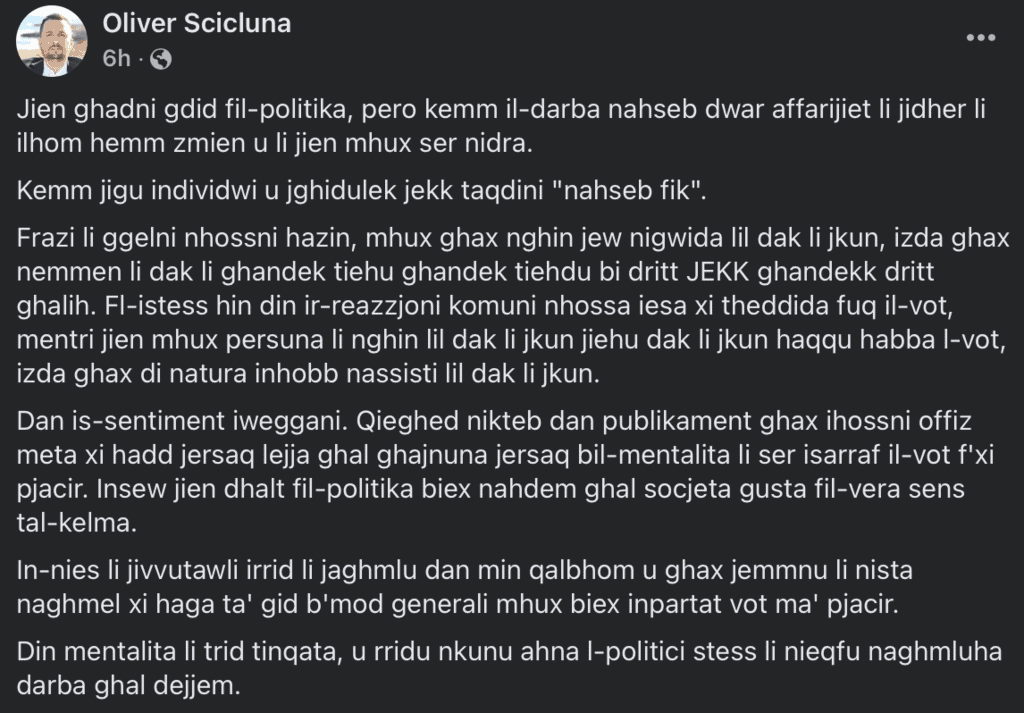 Denouncing this practice is a good start. Surely, Oliver Scicluna knows that politics, like nature, abhors a vacuum. He may tell people asking him for favours to bugger off. They’ll find some other candidate from his party to hand them the favours and take their vote away from him. Corruption is a demand and supply business, and where there’s demand some rotten politician will always be there to supply.

Oliver Scicluna declaring he wants no part in petty clientelistic corruption is all very well. But he’s not going to change anything this way. Not when public sector employees are recruited to cold call constituents of their ministers asking them if “they need anything”.

We have industrial-scale soliciting of votes for favours against which the one guy who says he won’t play that game is effectively insignificant.

There can be reforms to rules that help restrict this sort of thing. We should have rules banning the use of government assets for partisan or personal campaigning. State-paid employees should not be campaigning during paid office hours.

Cold calling voters offering services from a government department should be banned in the same way that it is not acceptable to have door-to-door sales of tobacco or outgoing phone-sex services.

Promising compensation or reward for a vote, whether the promise is kept or not, should be a crime and that not only during an electoral campaign but all the time. Rules against feasting and treating should also apply permanently not just during the five weeks before a ballot.

Rules on public sector recruitment should be enforced and strengthened, ranking transparency and merit over traded influence and partisan allegiance. Appointments to regulatory and enforcement bodies should be made on the basis of merit not political loyalty. That way a planning permit or a tax audit are decided on the basis of the criteria set in the rules not on the strings pulled by the politicians trading favours with their voter.

In other words, if Oliver Scicluna is not going to denounce the party boys planted at the Planning Authority, the Police Department, the traffic enforcement agency, the Housing Authority and all those other places that sit on the favours his constituents solicit from him he is going, to borrow from the Maltese vernacular, to pull at the cobwebs but overlook the spider weaving replacements for what he removes.

Political parties should lead by example. Not everything is fair in a competition between candidates in a district. Parties should penalise documented clientelism by excluding candidates that manipulate voters in this way. That’s not a law. It’s just decency and yes, I have the audacity to expect decency from political parties.

Including the Labour Party to which, incidentally and rather staggeringly, goody-goody Oliver Scicluna belongs. And yet, let us be honest, even more honest than the reputedly admirable Oliver Scicluna. If the Labour Party is happy to count among its MPs public-fund-for-personal-advertising Carmelo Abela, public-funds-to-pay-the-boyfriend’s-lunch Justyne Caruana, blood-money-for-speeches-in-Parliament Rosianne Cutajar, and so on, I’m not seeing them suppress clientelism in its campaigning any time soon.

Oliver Scicluna denounces voters who ask him for favours. If you think that shows courage and integrity ask him to denounce his colleagues who ask their voters for their votes in exchange of the favours he would not give.

Too often, politicians profess helplessness instead of do their jobs and draw up proposals for policy change. You can hear them lament: what do I tell a constituent who seems to assume that my job as a candidate is to procure things for them that they have no right to as if I was a good smuggler on a prison wing? Do I tell them to bugger off when I know other politicians will replace me happily?

In a nutshell that is the significance of Oliver Scicluna’s Facebook shudder of today, likely more the product of scandalised naivety than revolutionary zeal.

As Basil Fawlty famously once said, ‘What do you mean we started it? Who invaded Poland?’ Constituents assume the job of their politicians is to smuggle contraband into the prison system because politicians advertise themselves as well-dressed pirates with stashes of treasure pilfered from the public administration. I’m not just talking about Rosianne Cutajar’s oranges here.

I remember writing about Chris Fearne’s botched party leadership campaign where at an event his canvasser made a public invitation to members of the restricted electorate of that process to approach the allegedly straight and narrow Deputy Prime Minister with their shopping list of demands. Votes for favours, Amen.

In place of cahiers de doleances where the electorate tells their MPs what they’d like improved in the society they live in, politicians take orders for the delivery of the illicit, the illegal, the unfairly prioritised, the irregular, and the unfair.

How many Facebook posts will it take to fix that?