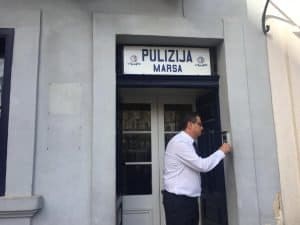 The sight of PN Leader Adrian Delia ringing the bell of the Marsa Police Station a couple of weeks ago, with something of a bemused look on his face, was mildly amusing. It also gave rise to some predictable memes, one of which had him ringing the door-bell of the Income Tax Office.

This sort of thing makes you wonder whether anyone at Dar Centrali bothers to think these things through. After all, with high-powered media-savvy people at his side, you’d have thought that Delia wouldn’t make these gaffes.

Amusement gives way, however, to dismay and a creeping feeling of dread when the realisation dawns that the bit of panto with the door-bell was simply a trailer for the way the PN seems to be about to lurch to the right. Pray God that I’m wrong, but for the life of me it looks like the ‘new way’ of doing politics is going to be to try to suck up each and every vote available out there, even if it’s wielded by a rabid racist or a bigoted boor.

Those who seek to lead the PN need to take something on board: yes, it’s important to win elections and even more important to seek to boot out Joseph Muscat and his gang but the PN, at least to date and in most situations, has always been on the right (as in proper) side of history.

Pandering to ignorant intolerants is not the way to keep this proud flag flying.

It is true that in some instances, such as the less-than-stellar handling of the divorce debate and in its obstinate habit of worrying what the conservatives think, the PN has been exasperating to those of us who would prefer a more liberal frame of mind, but generally speaking, we’ve been comfortable with them.

Bearing in mind the alternative, an MLP that counts amongst its supporters thugs baying for their opponents’ blood, that has no shame in holding that the majority rides roughshod over anyone who dares criticise, that uses ghettoisation as a substitute for real liberalism, it was easy to vote PN.

There are disturbing signs that this is not to be the case going forward. I’m not referring here to the baggage being lugged around by the new PN leader, that’s a whole other container-load of fish, unsavoury though it smells.

Following on from the door-bell stunt, there have been repeated references to the ‘problems Marsa residents are facing’. PN media outlets spout headlines about how ‘Marsa residents are feeling abandoned’ with a view to showing that Muscat’s government doesn’t care about these poor folk.

The problem is, those of us who can see beyond the betrayed neighbourhood sob-story (and know that it’s not even true) will already have glimpsed the waving flag and heard the thumping tubs.

It’s not more than a hop, skip and a goose-step to getting wrapped in the same flag and starting to march in step to the beating drums. If the PN goes that way, it will have crossed the line.

Things are bad enough already, all we need is for the ‘good feeling in the House’ (according to David Agius, newly-minted Deputy Leader) to turn into a mutual feeling that it’s time to get rid of all these alien problems.

Previous:Can Brian Tonna tell us if Egrant Inc has been struck off?
Next:Magistrate reprimands Judge