THE SUNDAY TIMES: No stone unturned 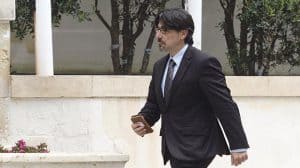 “Confined as he is by constitutional and legal limitations, Magistrate Bugeja is also marked by a stark warning from Muscat, who on television, in an evening that will be remembered as the kristallnacht of this regime, warned him of unspecified consequences should his findings not be to his liking. After the journalist who revealed the information that led to Bugeja’s inquiry was blown up in a car bomb, that chilling warning acquired a new significance.

“One key witness to the inquiry has been killed off. Others, likely more than one, watched the Prime Minister stand up in Parliament last week and warn them of long prison terms should they reveal what they know. As these people – because it is not only Jonathan Ferris – face their children, they have to decide if prison is a fair exchange for revealing information that the police are certain to ignore.

“Another key witness is harassed, intimidated and hounded from one country to another using all the formal and informal powers of influence that can be mustered. The reporting on Cypriot media slandering Maria Efimova with suspicion of the murder of Daphne Caruana Galizia smacked of conscious, malicious briefing. (…)

“To leave no stone unturned, Muscat authorised Henley and Partners, and possibly Pilatus Bank, to use the ruinous SLAPP tool to silence any journalists who might be looking into this.

“The rest of the world sees through all this.”