After the phoney phase

It’s nice to watch them panic. It won’t last long. They will dust themselves off and make it look like they planned it all along. Joseph Muscat reinvented himself into a leading light of Europe having been our own little Nigel Farage for more than a decade.

They’re actually trying to pin Pilatus Bank on the PN. Don’t be surprised if they succeed. At least half of that is the PN’s fault. Eleven months ago today the PN media caught Ali Sadr running out the back door of Pilatus Bank sneaking out with god knows what documents in his big suit cases. Then 7 months ago a leadership change cast doubts on the Egrant and Pilatus revelations saying they were as yet unproven and poorly sourced.

The real problem with that strategic change is that it undermined the PN’s ability to hold the government to account. The PN gleefully sawed off its own arm with a blunt spoon seeking to break free from reason and right.

Now, without an arm and bleeding heavily, it is a canvas on which the government projects its own crimes.

But even in this sole super power status that Labour currently enjoys yesterday their blood stopped flowing for a while.

You could smell the panic from a mile away. First the harrowing silence. Edward Scicluna, who spent an entire career as a camera-glutton pop-academic appearing on TV more often than your favourite sports commentator, suddenly became camera shy. Kurt Farrugia was hiding somewhere. Only Glenn Bedingfield volunteered some inanities about letting justice run its course. Nice isn’t it, when Labour spokesmen speak of letting justice run its course. Perhaps Glenn can tell that to his boss who hired lawyers to fight a court order for the police to investigate the Panama Papers.

Labour trolls were clearly left without instructions yesterday. Some went rogue quipping the redundant tu quoque that Therese Comodini Cachia had not resigned after the arrest of her sibling in connection with a failed car bomb. The memo that the brother was released without charge had not reached them.

The rest mostly stayed in hiding yesterday, like perpetually gloating Juventus fans who stay away from Facebook on the rare Sunday when they are beaten by … I’m sorry, I was going to try using a football analogy there, but I’m clearly out of my depth so I’ll leave the blank to your hopefully more competent imagination.

You can see the frustration and confusion in their thinking even in the way they ‘cleared’ the protest memorial in Great Siege Square last night. The foot-soldiers usually get instructions to “clean” it. And the other 8 times by and large they did that. This morning it was mostly found vandalised and upturned. The persons doing it were not following clear and orderly instructions. They were kicking and bashing in fury and frustration. 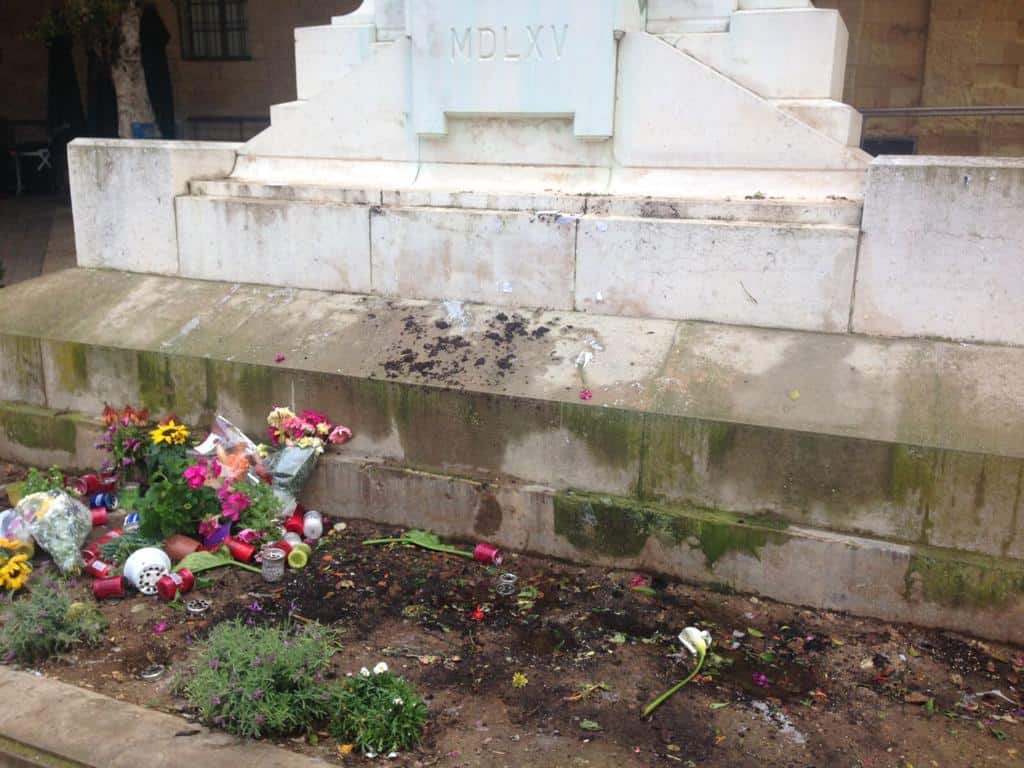 The bosses in Castille are reassessing their risks which all of a sudden have switched to a new level altogether. There is no guarantee the United States is even interested in Joseph Muscat and his gang’s corruption and what Ali Sadr may know about it. After all their job is to enforce their own laws where breaking them harms their interests.

But the converse of that is that the United States might very well be interested in Joseph Muscat and his gang’s corruption.

Firstly, the Buttardi connection – and payments believed to have been sent out of Pilatus Bank – suggests that property in the United States might have been used to launder money from corruption. They don’t like that.

Secondly, Pilatus handled money for the Aliyev regime quite possibly converting embezzled and misappropriated Azeri currency and converted it into clean United States Dollars that could be spent anywhere. They don’t like that.

Thirdly, accounts in Pilatus held by senior government officials – we know of Keith Schembri from a leaked and suppressed FIAU report – were used to facilitate granting of Maltese passports to Russian plutocrats. Some might be doing that to dodge United States sanctions. They don’t like that.

Fourthly, Pilatus allowed an Iranian pretending to be a Kittittian or a Nevisian to operate internationally under the radar designed to pick up breaching of sanctions against Iran. They don’t like that.

The Castille Gang can still rely on the hope that the Americans might be satisfied with capturing Ali Sadr and since they had enough for an indictment, which they will have worked on for months, they will have enough for a conviction that will lock him away for good.

Yesterday’s MFSA decision to allow the bank to operate without Ali Sadr was based on the pretext that Pilatus is not actually accused of anything by the US; its chairman is. Except that this isn’t some listed corporate. Ali Sadr is Pilatus and Pilatus is Ali Sadr.

The Panama gang is allowing depositors at Pilatus just enough time to see how they’re going to take their money out of it and find some other pirate cave to hide it in. The demise of Pilatus Bank will follow its cash starvation as naturally as death follows a space walk without a suit.

That is a complication for the Panama Gang but they can still hope to survive it. But hope is not what criminals like to rely on. They don’t want to be hostages to fortune. They can control the MFSA, the FIAU, the Police, even the Court of Appeal.

Using a salad of carrots and sticks they can largely also control the European Commission and its agencies.

But they can’t begin to imagine what the United States Attorney and the FBI might find desirable to do. And they most certainly cannot control them.

These last five months since Daphne Caruana Galizia was killed have been a phoney war. Now you’ll start seeing what they’re really made of.

Previous:Action on Pilatus: Too little. Too bloody late.
Next:MFSA clarifies: it has stopped Pilatus Bank from conducting any transactions, unless …