Far be it from me to question the economics underlying any rating agency’s report, I am entirely unqualified to do so. When Fitch or whoever come out with a stellar rating report on Malta, it is generally my position that I will let someone who can read numbers without developing a migraine tackle it.

However, my antennae twitched when the Department of Information, known to be always ready and willing to do its political masters’ bidding, confirmed their eagerness to please by issuing a triumphalist press release letting it be known that Fitch had issued a report brimming over with praise for Malta’s good governance and respect for the rule of law. 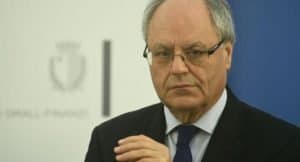 The presser was accompanied by a picture of the Hon. Prof. Edward Scicluna looking earnest and quite the image of someone in whose mouth butter would not melt, dutifully carried by sectors of the media.

The twitching of my antennae was prompted by two aspects of the whole thing.

One was the subtle (not) timing of the release, on a Saturday, timed to hit the Sundays, when newsrooms, even if they are inclined to question the outpourings of Castille and the rest of the gang, are not generally going to drag people in on overtime to comb through the raw material.

This means that we have to take the DOI’s word for it that Fitch, quite out of character, were actually making materially favourable comments on – of all things – Malta’s good governance and respect for the rule of law. I’ve emailed their compliance director – you can find his address on their website – to ask him to illuminate me on how Fitch managed to praise Malta in this context, though I’m not holding my breath waiting for a reply.

Which brings me to the second reason for my twitchy whiskers: the ratings agencies usually take such sources as the World Bank into account when making up their reports, and even the 2016 data on Malta shows a downward trend in the context of good governance and rule of law.

Since 2016, even a blind man reading a switched-off iPad in a gloomy cellar would see that things have got very much worse.

So where does that leave Fitch’s report?

Was the Ministry of Finance, by means of its mouthpiece and certain sectors of the media who seem to take anything the DOI says as an eternal truth, spinning us a Saturday yarn?

Or did Fitch really say those things, leading to the question of who wrote the darn thing for them and does he or she even know where Malta is?

Previous:No Steward hospital in top-100 US rankings
Next:THE SUNDAY TIMES: First one down