Kurt Farrugia called my story about a 2015 app put out on Facebook “pure fiction”. Naturally the actual app existed. The data requested from its users was requested. All that Kurt Farrugia included in his ‘pure fiction’ rubbish bin. What we’re supposed to believe is the government did not use the data for its micro-targeting campaign.

Here’s another bigger scam coming your way which Kurt Farrugia will describe as pure fiction. 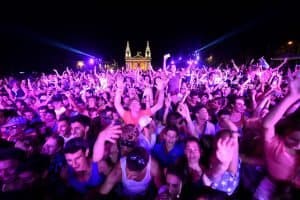 Super 1 just announced that attendance at the Isle of MTV this year will remain free but will require personal registration by all those who attend. An online form will be available. You get some perks if you register well ahead of time but if you forget to register, it won’t matter because you can provide your data over your phone when you get to the gate.

The puerile excuse for this exercise is ‘health and safety’. This way the organisers will know when they’ve had too many people let in the square and it’s no longer safe to allow more. There’s nothing in the explanation about what happens if you’ve registered two weeks before but the square has filled up before you get there by people registering at the gate. Sounds like a proper disaster waiting to happen.

Except that it isn’t of course. All those young people, all those tender Vot16 people who have not spared a thought of politics will be happily giving up data on themselves in exchange for entrance to the concert.

And the pure fiction we’ve all been waiting for? Labour gets stocked up with a treasure trove of data it can use to manipulate voters into supporting it.

In theory there should be regulators protecting us and preventing the abuse of information about us. In theory. In practice these are the same regulators who prevented the publication of names of people who bought Maltese citizenship brazenly saying they’re doing so to protect the government from embarrassment. We know whose side these regulators are on.

We need to dust Nineteen eighty-four from the cliche’ shelves. Truly the tyranny of information has come to pass.

Previous:Ali Sadr is not some Oskar Schindler
Next:GUEST POST: Coming up on 6 months