What the Maltese really think of corruption

Even logic is subject to mood. If one’s own hypotheses are not challenged they become dogma and one is stuck without a way out. In times like these we give in to despair when argument is not enough, logic is optional, truth but a version of reality likely least favoured by many. But in despair there must be hope.

And there are alternative explanations that can help make sense of everyday disappointments.

The pitfall of thinking a population is inherently corrupt is just that: a pitfall. When those who are meant to set an example are caught red handed siphoning money in off shore accounts, we think everyone must be doing it. When those are meant to lead us dodge taxes and spend their share of contribution to the common good on luxuries they cannot afford, we think we are alone in paying taxes even before we earn what’s left of our income. When the defence of those caught red handed is that only virgins can criticise the corrupt ways of their politicians, we think it is pointless to argue.

But science cannot be determined when we’re subject to despair.

Here are some figures from the last Eurobarometer survey into perceptions of corruption in Europe. It has been in the public domain for some time so you could have come across these already. But it’s good to look at them again and see how Maltese respondents compared with other Europeans. The survey was taken in October 2017, after Labour won resoundingly in spite of the corruption scandals it was deep in.

Significantly though the Maltese sample was collected the week starting the 21st of October, soon after Daphne Caruana Galizia was killed. We can get a good idea of what the people of Malta where thinking at the time.

ONE: Maltese people DO NOT approve of doing someone a favour to get a service done by a public servant.

And most forcefully so. Only Danes responded in more consistent numbers. Eight-seven percent of Maltese respondents consider it never acceptable to do a favour to someone in exchange from some public service. 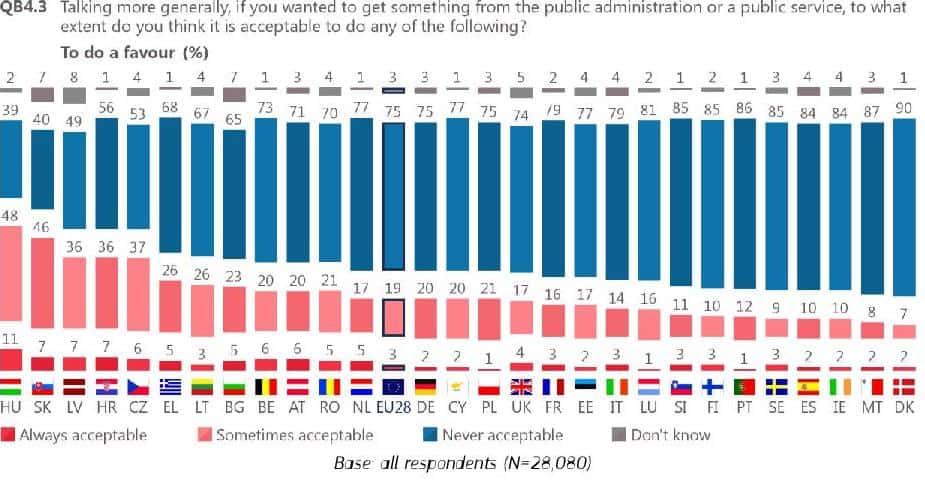 TWO: At a rate far GREATER than the European average, Maltese people consider corruption as unacceptable.

Indeed 83% of Maltese respondents deem corruption unacceptable compared with a European average of 70%. 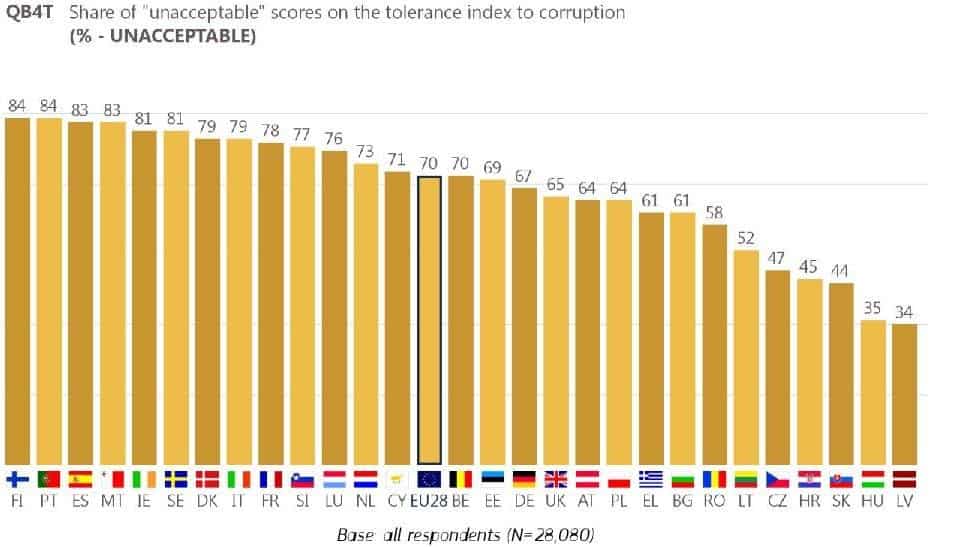 THREE: Labour’s first administration has massively increased perception that political connections are the only way to succeed in business in Malta.

Indeed between March 2013 when the last survey was done before Labour came to power and October 2017, Maltese respondents saying you need connections to get anywhere here increased by 14 percentiles and became a majority of people.

Let’s spell this out: before Labour came into power a majority of people thought you did not need connections to get ahead. But after less than five years of Labour the reverse is true. Clearly the meritocracy pledge was not only hollow. Most people do not believe it. 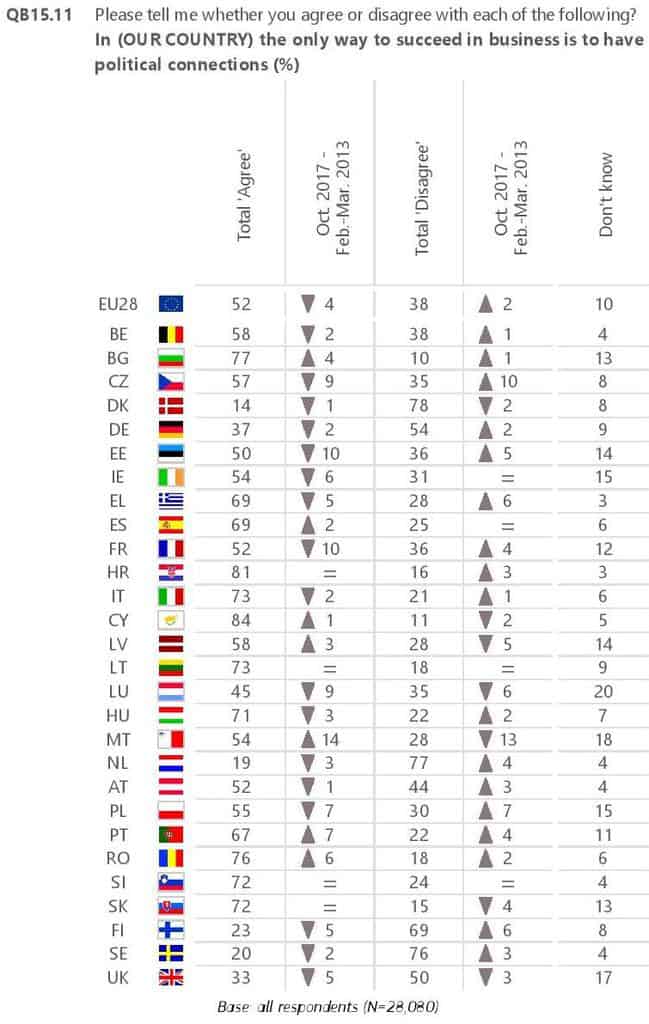 FOUR: Maltese people who believe it’s not worth reporting corruption because it is impossible to prove have doubled since Labour came to power.

Since 2013 the number of Maltese respondents who do not think anything can be done about corruption because it cannot be proven has increased by 13 percentiles to 27%. But that’s not the foremost concern on people’s mind. That would be number five.

FIVE: Forty-one% of Maltese respondents think corruption is not revealed because whistle-blowers are not protected. That response will have been consolidated by the campaigns of intimidation against Jonathan Ferris, Maria Efimova, David Casa and others over the last months since the survey was conducted. 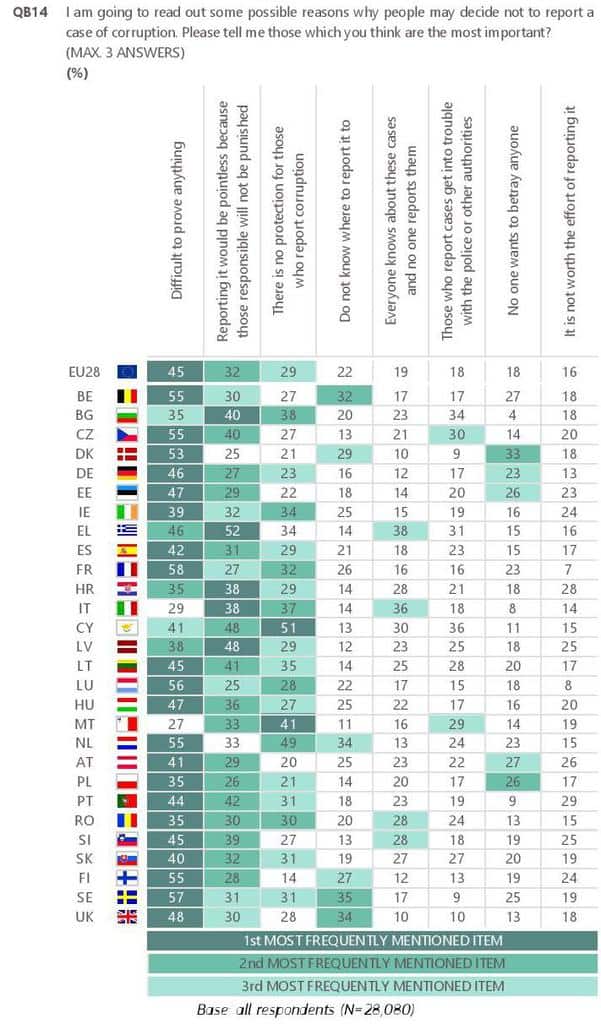 Here are the observations by Transparency International on the report and particularly on the concern in Malta (and elsewhere) about the lack of protection for whistleblowers.

And here’s a copy of the Eurobarometer report in full. ebs_470_en