The end of the beginning

So she was not mad after all. She was not lying. She was not a witch intent on hurting Labour because she resented its success. Not that we needed this to allow the facts she published and the evidence she presented for any rational person to be persuaded Pilatus Bank was a den of thieves, a bank for crooks run by crooks.

Pilatus Bank, subject of an ongoing investigation of the European banking agency, has tonight been decapitated by a personal action by US prosecutors against Ali Sadr, who personified this bank.

We have spent the last four years asking one simple question: how does an Iranian with more passports than years of experience in banking get granted a license to operate a European bank?

It was followed up with the questions: why does a less than 100-account bank process billions of dollars? Why does the ruling family of Azerbaijan clean its money in a Maltese bank? Why does Keith Schembri hold an account at Pilatus Bank? 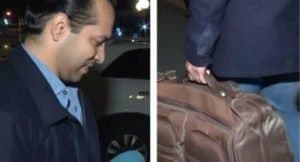 The journalist who asked these questions, Daphne Caruana Galizia, was deemed a traitor, a witch, a mad woman. Her source, when outed, was hounded and feared for her life. She still does and she is now on a cold hard cell floor in a Greek prison where she walked in last night fearing she would never see her children again. She is there on the request of Malta’s government that is using the pretext of Ali Sadr’s complaint that she robbed him of a few hundred euro. Oh how quick criminals are to seek justice.

This is a strange night. Maria Efimova and Ali Sadr are in different prison cells half way across the world: the former chased by the latter; the latter chased and caught by the United States government.

It is a strange night where I think of many people in their sleep and how their morning will play out when they read this. 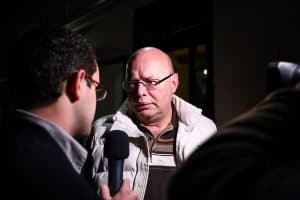 I think of Lawrence Cutajar who went on TV a year ago, his tongue still flicking cartilage from the gaps of his teeth shuffling what was left of a fried rabbit dinner, saying that in his wisdom there was no reason to come down on Pilatus Bank because Daphne Caruana Galizia’s revelations did not deserve attention. Even as he said so Ali Sadr ran away in the dead of night with evidence that would have incriminated him and others.

He should have resigned that night. He should resign tonight. When criminal bankers use our name to shame us around the world, we must blame our policemen who, though informed by our journalists of what is happening under our noses, would rather munch on fried rabbit than do something about the crimes under their watch. 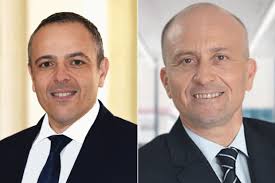 I think of Keith Schembri who got Anġlu Farrugia to protect his boss from having to answer Simon Busuttil’s simple question: do you have an account at Pilatus Bank? He did that even though we knew he did. Because he never denied receiving a 100,000 euro in that account from Brian Tonna, his accountant. He merely disputed what he was being paid for.

He used a Maltese bank, licensed under his watch, because he could rely on a sort of discretion he could expect from no other bank. He should have resigned when Simon Busuttil caught him out. He should resign tonight.

I think of Michelle Muscat on whom multiple sources at Pilatus Bank revealed the secret of owning an offshore company set up by the same Brian Tonna to accept 6-figure bribes. She cannot resign from being the prime minister’s wife. But she can choose whether to benefit from his corruption or step away from it.

But she relied on Pilatus Bank to hide her secrets. She relied on Ali Sadr to slip away in the dead of night and hide the evidence against her. 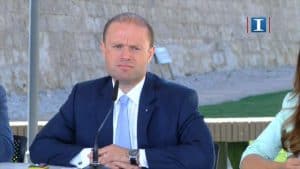 I think of Joseph Muscat, chief architect of a syndicate that has taken over our country. And of what he must be feeling knowing that a major buttress in this edifice of crime is now in the hands of law enforcement officers he does not control.

He will be fighting for survival now. He will fight from the corner mobilising all those that benefited from his largesse. The fury and fire at the “traitors” will reach unprecedented levels. Daphne Caruana Galizia’s great treason will get just the backlash you can imagine now, and worse. If you thought they were being cruel and crass disrupting and mocking anything that reminds them of her, brace for much darker days to come. 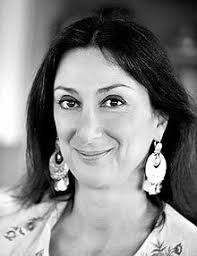 Joseph Muscat should have resigned when reports of his own family’s corruption where published. He should resign tonight.

Tonight I think of her too. If she was here, I would like to think, she’d allow herself a bit of a smile tonight.