Around six months ago, after having attended Daphne Caruana Galizia’s funeral, I wrote a piece for this blog called ‘We must let you go now’. In this blog post I had said that the time of sitting on the fence is over, that it is our turn to feel fear and do it anyway. That Daphne’s work is done.

We rightly felt shocked by Daphne’s killing. It was meant to shock and stun. It was meant to silence Daphne and us all. But we took to the streets in Sliema to protest against her murder. We brought flowers and candles. We wrapped ourselves in the Maltese flag. Some of us did it out of gratitude, others out of guilt. We even eschewed our Christmas shopping for an hour or two to listen to Antonio di Pietro in Valletta. He told us then that an ocean is made of individual drops.

And then you stopped coming.

You felt you had done your duty and moved on. You thought that it is enough to let a small number of activists do the dirty work in your name. You applaud activists from Civil Network Society, #occupyjustice, Kenniesa, Awturi, Reżistenza, for among other things, pitching tents in Castille Square, for facing off Joseph Muscat in his lair, for hauling a bay leaf plant with a choice quote from Il Manifesto della Antimafia by Nando Dalla Chiesa up the steps of Castille, for putting T-shirts with Daphne’s last words on monuments, for putting up Three Billboards, for playing the alternative People’s Playlist in Muscat’s stomping ground, for organising vigils in European countries, for branding the Castille facade with “House of Impunity’’ and “Who Killed Daphne?” for placing a washing machine at Pilatus Bank. You clapped, called them all brave, but that was the extent of your involvement.

Some of you felt robbed that their daily fix of Daphne’s Running Commentary was taken away from you little thinking that for her family and close friends, a loved one was brutally killed because she satisfied, your right to know. You also expected Daphne’s family to continue her investigative journalism, but were told that none of them is willing to sacrifice another member of the family for this country for it is everyone’s responsiblity to demand justice.

So, you stopped coming. You stopped asking questions. You carried on with your lives. Some of you were dazzled by the lights in Valletta, by the garish Opening Ceremony for V18, by the Festa Kbira of the four titular statues in the streets of Valletta. You celebrated Christmas and Easter. You probably went to the #OhMyMalta event by Nas Daily at the Triton fountain. What is wrong with this, you ask? Daphne is dead, nothing will bring her back. So what’s wrong in having a good time? There is nothing wrong in having a good time. Even our ancestors went to dances and festas in the middle of the blitz, when they took breather in between defending our islands from the tyranny of Nazism.

Nothing has changed in six months. Rather it has gotten worse.

For at the time of writing the spontaneous memorial to Daphne in Great Siege Square has been cleared for the ninth time. A blogger paid illegally twice over from our taxes with a desk at the Prime Minister’s Office is gloating over Daphne’s murder on The Guardian or giving foreign journalists doctored reports. Another with a desk at OPM is busy either marshalling goverment trolls against Archbishop Charles J. Scicluna for having a working backbone or accusing Daphne’s family of having a hand in her assassination. Another EU country decided against extraditing a whisteblower who worked closely with Daphne Caruana Galizia to Malta for protection; another has been denied whistleblower status in his own country and carries a gun on his person for protection.

Why are you still keeping away?

On the day that Malta woke up to the news that the Chairman of Pilatus Bank was arrested in the US, many who till then had kept silent were expressing satisfaction that Daphne was right but then only the usual familiar faces showed up in front of the Police Headquarters that evening armed with brooms and resolve.

In the Second World War, Malta was described as the “unsinkable aircraft carrier” – truly an #OhMyMalta moment in our history. It is now sinking under the weight of corruption, impunity, cronyism. Don’t add your indifference to its cargo. Be like our ancestors who seventy-six years ago, precisely on the 15 April 1942, were awarded the George Cross for their heroism and bravery in the face of unrelenting onslaught from enemy bombs.

You are still in time to do the right thing. There is no expiry date on responsible citizenship. On caring what happens to your country. On demanding justice for Daphne. For Daphne does not only belong to her family and friends. Demanding justice for her is our individual #OhMyDaphne tribute for her. For her sacrifice.

Come this evening to the Mass celebrated by Archbishop Scicluna at 6.00 p.m. at St Francis Church in Valletta and then walk with us to the Memorial for the Vigil. Bring a candle or flowers but above all, bring a burning resolve and determination to fight for our country, for our democracy, for justice, for Daphne. Let this be a truly #OhMyMalta moment.

And if you think that you are too small for this fight, remember the wise words by Ovid: Gutta cavat lapidem [a water drop hollows a stone [not by force, but by falling often].

The drop will become an ocean someday. 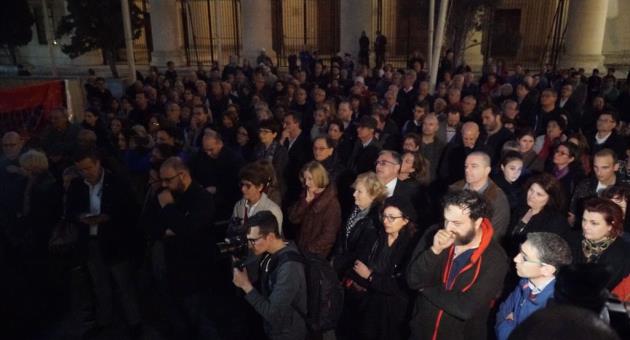