Blame it on Eve

After the film screening on Saturday I hosted a panel discussion with guests who had interesting things to say. But they were all men. That wasn’t a good thing whatever the context and whatever the subject being discussed. The fact that the silly all-male scene was unintended and due to some last minute cancellations from my female guests is neither here nor there. I apologised at the event and do so again here.

But that was an audience that would see right off the bat what is wrong with an all-male panel. Perhaps aided by the fact they had just seen a film that pays tribute to an exemplary woman that was professionally unparalleled but that suffered the worst denigration possible not least for the simple fact of being a woman.

This is a culture that will stop at nothing to silence women.

Martina Urso captured the imagination of an army of angry Labour trolls over the last few hours because of images of her challenging Joseph Muscat and other images of her refusing to kow-tow to Joseph Calleja’s patronising tone.

In people’s sensibilities a woman refusing to submit to a man – especially one perceived as all-knowing and all-powerful as Joseph Muscat is – is offensive and a cause to anger.

I underline, in people’s sensibilities: not particularly men’s. In the order of things men talk and women listen. Women who get out of line are sinful. They are evil temptresses who use their wiles to break-down the good order of things.

This is why a woman writing on Facebook Group ‘women for women’ (where men are not allowed) repeated the slander, without batting an eye-lid, that Tina Urso is a prostitute. 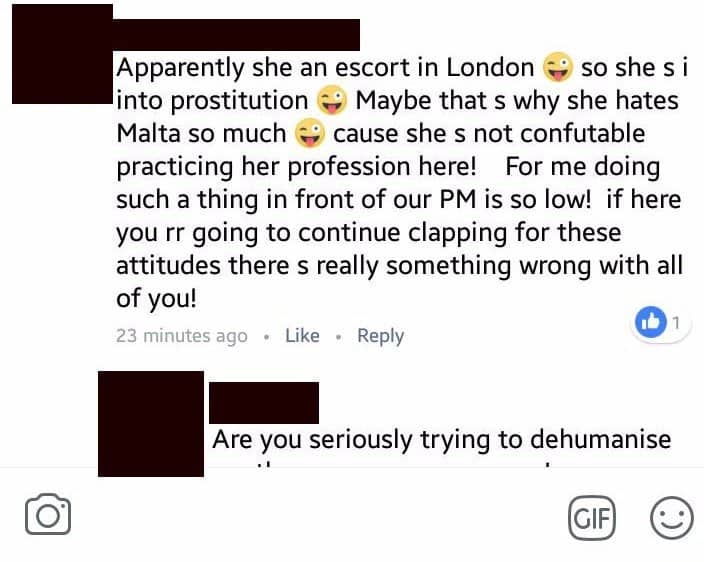 The woman writing this post would likely not easily assume any woman is a prostitute. But in her mind a woman who tells Joseph Muscat he is wrong about anything must be.

Prostitute. Witch. These are medieval misogynistic notions that we happily carry forward.

Only women can testify to the brutal unfairness of this. Only women can explain how many of them “keep to their place” out of fear of vicious branding in this way.

A man in place of Tina Urso protesting against Joseph Muscat would not have been lightly branded a rent boy. It does not work like that.

We cannot stop being aware of this. And by having only male guests on Saturday on stage I didn’t help that awareness improve.