When Malta was truly tagħna lkoll

The choice of Joseph Azzopardi as Chief Justice is remarkably uncontroversial. He was a Labour Party candidate once and served on organs of the Labour Party. But he is not perceived by any stretch of the definition as some plant of the government.

The Times of Malta: “Described as an uncontroversial character, Dr Azzopardi is considered by many in the legal profession to be a very honest and affable man, who has served the court with efficiency and rectitude, Times of Malta had reported.”

There’s also the fact that he is 2 years from retirement which indicates the government may have left a battle for another day. 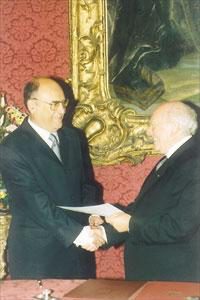 I would though highlight the beginnings of Judge Joseph Azzopardi’s career on the bench. He was appointed in 2003 in an Eddie Fenech Adami administration.

That was when we had a meritocracy and the qualities sought in public appointments were competence, integrity, experience and efficiency. The fact that he had been a Labour Party politician did not disqualify him. Far from it.

Back then Malta was Tagħna Lkoll.

And then, it seems, we lost that somewhere along the way.