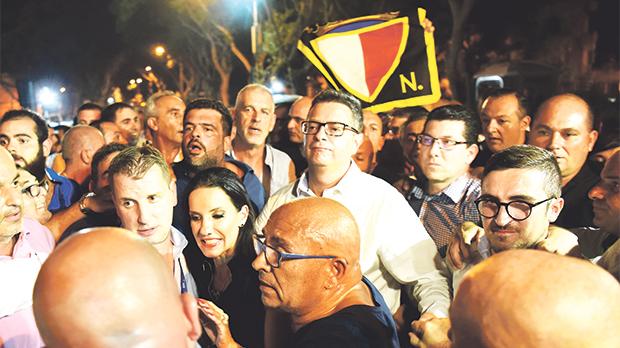 Edward Cherubino, seen here next to his cousin Nickie Vella de Fremaux, was Adrian Delia’s agent in the 2017 leadership election

Various media reported in recent hours that local Pharma importer Cherubino Ltd has been awarded the first ever letter of intent by the government to cultivate cannabis in Malta for medicinal use.

Cherubino Ltd has already announced it will be the first to legally import cannabis into Malta.

Cherubino Ltd is owned by Marcello Basile Cherubino and his family. His wife is Nickie Vella de Fremaux’s aunt and his son Edward Cherubino is one of Adrian Delia’s most trusted aides and was his campaign agent during the PN leadership campaign in 2017.

Adrian Delia in the past also acted as Cherubino’s lawyer.

The news that Cherubino Ltd is the first to benefit from the new cannabis laws is significant.

The leader of the opposition was enthusiastic in his support for this legislation, and sources inform this website discussion in the PN Parliamentary Group on the subject was cut short by the leadership.

That did not raise too many red flags at the time given that in any case discussion in the Parliamentary Group in the PN under the current party administration is rarely extensive on the odd occasions that meetings are held.

Adrian Delia never declared his wife’s family and his personal election agent’s interest in the cannabis sector even as the party was developing its policy on the subject.

All this happened before Adrian Delia took over the role of party spokesman on good governance.