Saved from the waters 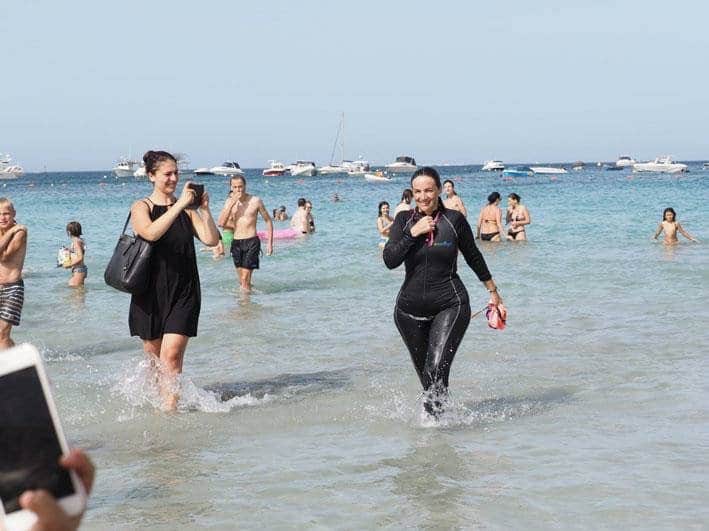 Yes she after all might mean well, though we’re entitled to doubt that. But there has never been a more insensitive time for the prime minister’s wife to go on a swim and take with her enough security detail and press cameras to launch a new lunar landing.

No matter who you are it is not easy to stop yourself thinking of people drowning around you. We are hard wired to help each other out not because we’ve been taught manners or because of Sunday school. This is not like knowing not to lick the butter off a knife. Our biology requires us to seek more than our own survival or even merely that of our children or people we know. We will seek to help strangers and jump after them without thinking.

The real effort, the product of conditioning over time, nurture overcoming nature, is in resisting that basic instinct of humanity. It is harder to stand idly by and ignore the suffering around you than to kneel and help.

At the sight of  a beggar with a child on a pavement of a city we visit, our basic intuition is to empty our pockets. Until all the warnings kick in that the begging is a scam, the child is a suffering prop that will suffer more if the practice is encouraged with charity. It is harder to withhold help from a hungry baby even for cogent reasons than it is to cuddle one’s own conscience with an easy act of kindness.

The leap of racial hatred is even higher. Ranking humans according to race, withholding sympathy to drowning children on the basis of skin colour, does not come naturally to any one of us. In order for us to be able to deny ourselves our own basic humanity and our base need to gratify ourselves by reaching out and giving a helping hand, the alienating fix of social conditioning must truly be enormous.

Think of all the things that conspire to stop you from acting on your instincts. Your entire lifetime of imbibing artificial notions such as the sanctity of your property, the entitlement to your wealth, the exclusive heritage of the portion of the world you were born on, that even the worst of people of your skin colour are better than the worst of those of another, that other races are dimmer, smellier, more rapacious, lascivious, less industrious, rational. A conspiracy of fear, exaggeration, the twisting of facts and the perpetrating of myths, condition you to fight the urge of stretching out an arm to help a drowning child.

We do not think ourselves as bad people. We all have our hypocrisies, greater or smaller, and we learn to live with them or we’ll never get out of bed.

But hypocrisies need mitigating justifications to prop them up.

First there’s the law which we twist out of its intent to right the wrongs of anarchy into a balm that soothes the itch of guilt. Think of the Nuremberg laws written to justify the worst crime in history. Using the law to incriminate those among us that follow their instinct to seek to save people who drown is, from the point of view of the drowning child, just as heinous. Six million Jews or six Nigerians killed by the force of law are victims of the same crime, killed by the hand of legal authority and moral vacuity.

Second there’s this acrobatic of terminology: ‘economic migrants’. They are distinguished from the rarer breed of refugees escaping war or physical persecution. They do not come from countries where their mud brick huts are blown up and therefore have a mud brick hut to return to.

What retrograde, primeval comforts we resort to when we lose touch with our own humanity. We harken back to feudalism that did not see poverty as a blight to be cured but as the social order willed by God. The poor are poor because it must be so and for them to attempt to escape their lot is defiance of the will of God who planned their fate. Being born to a wealthy family is no accident. It is divine design.

Modernity was supposed to defeat this sense of privilege. Social mobility is a right, privilege a social crime perpetrated by the few at the expense of the many. Poverty is a violence inflicted on the poor who have a right to fight back and break free. These, after all, were the precepts of socialism and liberalism: the right of every individual for equality of opportunity and the duty of society to break the chains forged in the fires of injustice.

And yet economic migrants are expected to accept their fate of poverty, deprivation, denial of opportunity, the frustration of aspiration and ambition that is natural to every young woman and young man as breathing and bleeding. You see them show pictures of young black men wearing shoes and sun glasses and, the horror, driving cars and listening to music on headphones and show this as evidence of the unworthiness of the insolent slave who rides a horse instead of cleaning it.

If it is no longer to be the white man’s burden to civilise the world as it robs it of its resources, it is the black man’s burden to remain poor and deprived. If we can no longer rob black people of their heritage why then we can continue to deny them a share of our own.

When we hear of a pregnant black woman on a boat stuck at sea we do not think of what overwhelming love for her unborn child that woman has that she risked her own life walking across deserts, sustaining the lashes of the abusers she would meet along the way before floating in the open sea: that absolute desire to give her child opportunities she never had.

Instead we imagine her to be selfish using the child as a human shield, blackmailing us to save her life. Because in our perverted morality we must show ourselves to care for the unborn child whilst we show indifference to the hundreds who drown interrupting their existence at whatever later early stage.

Now we stop those among us who would save them: not for the hundreds of souls they would bring in, or not just for that, but also to prevent them taking journalists photographing and documenting this wet holocaust of our time.

And as the perpetrators of all violence would, we blame the victims. As we let them drown we comfort ourselves that their death is not caused by our failure to save them but by the choice they made of attempting the journey. It is their fault they did not accept their fate and lived their poor, deprived existences whilst we enjoy the fruits of God’s plan for his chosen white people.

Is this really an opportunity to criticise the Muscats? After all they are not alone responsible for the rotting bodies consumed in the seas Michelle Muscat swam in. They aren’t. Not alone.

It is an opportunity to criticise those who fail to criticise the Muscats. Our own collective hypocrisies: all we manage to conjure to distract us from our basic instinctive call to reach out and save lives. Our own bobbing in the warm Mediterranean waters slathered in sun cream to make sure our white skins don’t blister as black skin bursts open stretched by the bloated bodies of the drowned.

We think of the sea chewing on the meaty lobster tails and high grade sashimi tuna. Our digestion would rather be deaf to the terminal screams of children who have seen their parents drown and too soon have understood their fate: that they live in a world where white people will look up from their food and blink out of their drink for a second when a picture of their body washed ashore invades the comfort of their inane Facebook feeds.