When the government do not like the findings of an inquiry

The way the government are behaving is making things quite dangerous for people they perceive to be in their way. And this is not some incidental consequence. It is targeted malice.

Take for example the posters set up this morning calling Daphne Caruana Galizia a crook, eight months since she was blown up in a car bomb. The pretext is the Egrant inquiry that confirmed Daphne Caruana Galizia’s most important story of the last four years: a government minister and the prime minister’s chief of staff set up Panama companies in their first week of office and a third company was set up by someone “more important than they are”.

That story and several others, including the unproven allegation the third company is owned by the prime minister, earned him and those around him the moniker ‘crook’. Now it’s being ascribed to the journalist.

The posters that were put up this morning are still there this afternoon. Some were stuck to the protest memorial in Valletta. Some were attached to the same trees where protest banners calling the prime minister a crook were removed by a policeman on the pretext they were “a traffic hazard”. 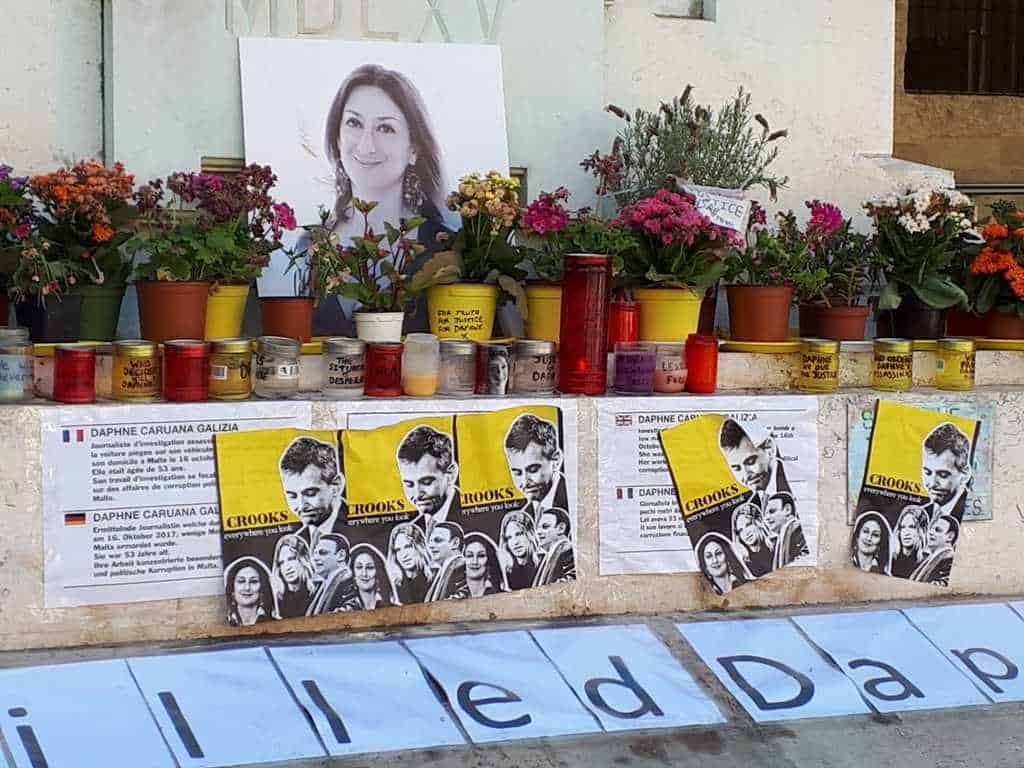 Posters criticising the prime minister’s critics are not a hazard in this government’s selective judgement.

This delinquency in law enforcement makes the posters up today an act of state aggression not merely on Daphne Caruana Galizia who cannot be hurt anymore but on all other journalists and sources doing the job of creating inconvenience to the government.

It is not a coincidence that the government let it be known today that they will be allowing advertising on street lighting poles. As long as the government are not criticised, street furniture messaging is not a hazard. And they want you to know that you can do what you want as long as it is not unpleasant to them.

This is no little thing.

There is no doubt that the way the prime minister is leading the charge on discrediting journalism and even dissent and opposition is having a harrowing effect. More and more people feel emboldened to turn on journalists, and instead of considering them as public servants and a necessity in a democracy, they repeatedly and forcefully call for them to be shut up or to even explicitly threaten journalists with the darkest consequences (bħal m’għamlu ‘l Daphne).

It’s not just directed at journalists of course. It’s also targeting the few politicians opposing the government rather than defending them. Therefore Adrian Delia’s trolls, who now act on the silent instruction that criticism of Joseph Muscat is a betrayal of the mission of the Nationalist Party, are also very much out in force bashing any form of criticism wherever it comes from. 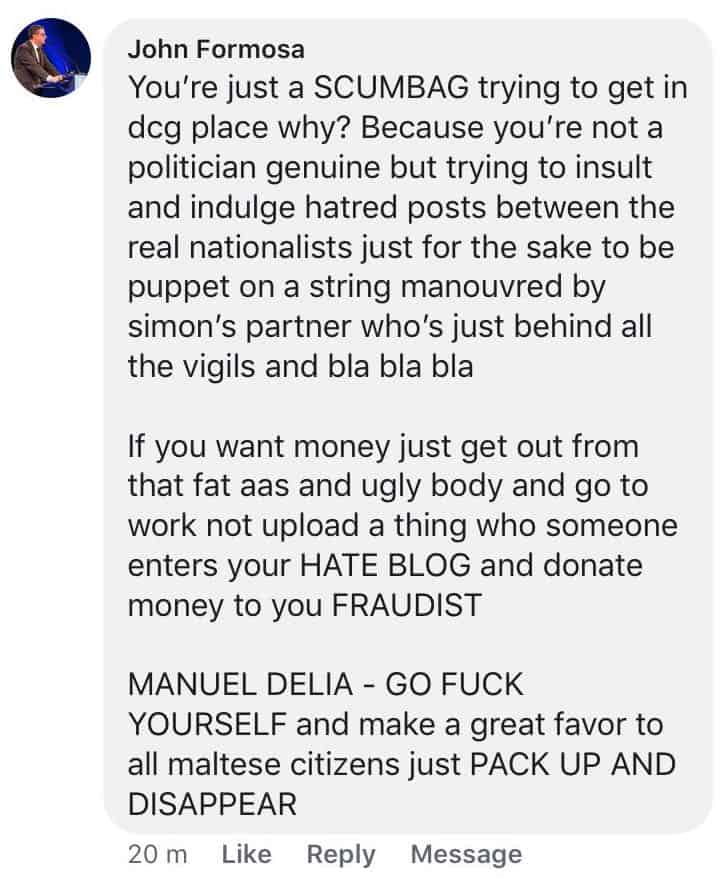 Today’s government statement about the UK Parliamentary Report raising the need for investigations on whether Malta’s Labour Party was aided by SCL before the elections is a case in point.

The UK Parliamentary Report refers to my blog in a footnote.

Here is the paragraph that appears to have so profoundly affected the government that it issued a harsh statement discussing the quality, or lack thereof, of the journalism on this blog, and by extension the quality of Westminster Parliamentary inquiries that it effectively branded as gullible and complicit:

“220. Henley & Partners has been Malta’s exclusive passport agent since it helped to launch its citizenship-by-investment (CBI) programme in 2013. Henley & Partners was granted permission to control the selling of citizenship to eligible investors in Malta, at a cost of €650,000 per passport. As Malta is in the EU, this was especially valuable. We have evidence to show that Dr Kalin was meeting representatives from both political sides in Malta, with a view to mutually-beneficial arrangements. The evidence also shows that Christian Kalin asked SCL to introduce him to Joseph Muscat, the Leader of the Opposition at the time, in June 2011, and indicates that SCL had been advising Malta’s Labour Party for several years before the 2013 elections. It is believed that SCL, or its associated companies, worked with the Labour Party there, on the 2013 general election campaign in Malta.”

The UK Parliamentarians have found my reporting as sound and its conclusion fair. I have reported on evidence Christian Kaelin and Alexander Nix were scouting in Malta before 2013 and that they discussed Joseph Muscat already in 2011. And I have said this indicates Joseph Muscat has been advised by Cambridge Analytica since before 2013.

It is not conclusive evidence that they did advise him since before 2013. I have not claimed it to be. The verb “indicates” should be a bit of a giveaway. The UK Parliamentarians have not declared it to be conclusive either. It is not my remit, and it is not theirs. But it is the remit of journalists, parliamentarians and so on to gather evidence, listen to sources and ask reasonable questions for which they do not necessarily know the answer allowing the institutions empowered to act to take it from there.

Now the UK Parliamentary Committee (I am uploading their full interim report here: 363) has not just sat down on google and relied on my blog for their investigation. They have interviewed, publicly and openly, people who worked at SCL and people who used to run it. They have examined the evidence and have reached their conclusions on premises far more informed than this blog.

The fact of the matter is the government set themselves up for these situations. Immediately coming from the 2013 elections their first and only real economic initiative are selling passports in an exclusive contract with Henley & Partners. Henley & Partners is found to have worked closely with SCL manipulating elections in a number of small jurisdictions to win contracts.

And the government are surprised anyone asks if this happened here as well?

“231. We received disturbing evidence, some of which we have published, some of which we have not, of activities undertaken by the SCL-linked companies in various political campaigns dating from around 2010, including the use of hacking, of disinformation, and of voter suppression, and the use of the services of Black Cube, an Israeli private intelligence service, whose work allegedly included illegal hacking. We also heard of the links between SCL and Christian Kalin of Henley and Partners and their involvement in election campaigns, in which Mr Kalin already ran or subsequently launched citizenship-by-investment programmes, involving the selling of countries passports to investors. SCL’s alleged undermining of democracies in many countries, by the active manipulation of the facts and events, was happening alongside work done by the SCL Group on behalf of the UK Government, the US Government, and other allied governments. We do not have the remit or the capacity to investigate these claims ourselves, but we urge the Government to ensure that the National Crime Agency thoroughly investigates these allegations.”

This is what happens when normal democracies come across indications and reasonable suspicions of wrongdoing. They call upon the law enforcement agencies to investigate and act on the basis of what they find.

Joseph Muscat’s government are used to bully journalists into silence. It’s used to crush institutions (including Parliament) to ensure they serve their interests and cover up for them. They are used to law enforcement agencies refusing to investigate allegations of wrongdoing by people in Joseph Muscat’s circle.

The government’s statement of today is being communicated in protest to the UK government. Manuel Delia has just been reported, along with a number of respected British MPs, for “fake news”, “malicious gossip”, “irresponsible guesswork”.

They will recognise that language. It has been spoken before in vilification of a far more capable Maltese journalist and even in the UK, they have been reading about her.

I should be so lucky to be judged worthy of such company by these band of crooks.

Previous:Everyone in here is innocent, you know that?
Next:Adrian Delia charges backward