The real mystery is why it took them so long to say it out loud. Those who objected to the scheme the first time the idea was first pronounced anticipated all this. Selling citizenship helps tax evasion, not merely tax avoidance as the sophists would suggest we should distinguish. It is also a threat to security as all European countries have to recognise the right of free movement of acquirers of citizenship of the most indifferent and greedy amongst them: that’s us.

The signals are now clear. Things are going to have to change. The OECD has blacklisted Malta as a conduit for tax evasion. And the European Commission is starting to give voice to European security agencies that have been telling their political masters they are extremely uncomfortable with this loophole.

Christian Kaelin made a huge leap from banana republics in the Caribbean to selling the citizenship of an EU member state that has negotiated with enormous difficulty and the massive resistance of the Labour Party the right for Maltese citizens to be recognised by Germany, France, Italy and all the rest as if we were citizens of their own. It was hard enough to get them to open their doors to us. It took decades to get that done. Now they have to contend with the crooks, the tax dodgers, perhaps even the fully-fledged criminals that we sell our citizenship to.

It now looks like Europe’s patience is wearing thin.

Read this interview on the subject on The Guardian with Commissioner Vera Jourova. They are no longer taking Joseph Muscat’s nonsense. 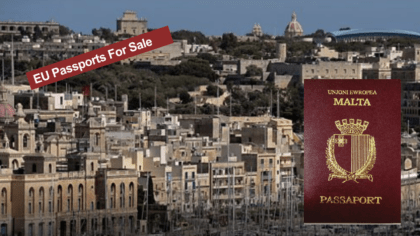