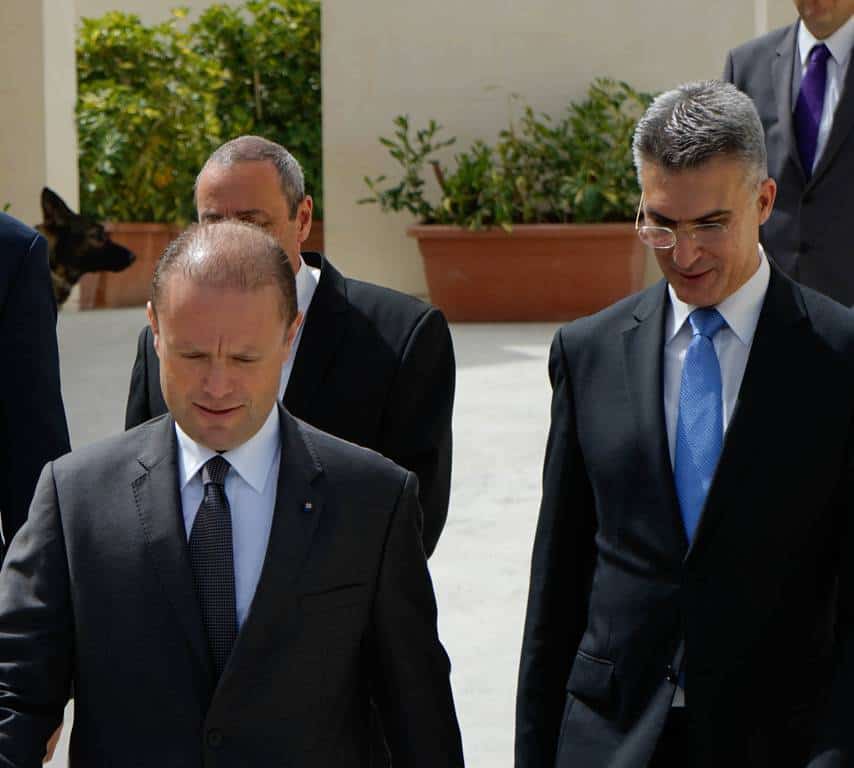 It’s a perverse criticism I grant you. But Carmelo Abela cannot cover up for someone else’s lies to save his own life. He’s been here before. When he was home affairs minister he burst the bubble of all the nudging and the winking about whether Joseph Muscat and Matteo Renzi had some under the counter deal for Italy to take on migrants on their way to Malta. Joseph Muscat at the time wanted us to admire his ability to negotiate such a unilaterally favourable deal with Italy without him acknowledging it existed because we would then have to ask him what he gave up in return.

Then Carmelo Abela, facing uncomfortable questions from the press, let the cat out of the bag and confirmed the deal existed. Hours later he was made to ‘clarify’ his statement by saying something to the effect of ‘Remember the deal I explicitly and unambiguously confirmed to you this morning well and truly existed? About that. Er. It doesn’t. I hope that clears that up”.

At the London conference on media freedom this week, Carmelo Abela was not exactly undergoing sleep deprivation at Stalag 17. He wasn’t being pulled on the rack or shown a large pile of juicy meatballs and a pink Rhenish wine after being starved for a week.

He was pinned under the diminutive Sarah Clarke who asked him a question that has been put to his government a hundred thousand times in the last several hundred days. It’s not the first time he’s felt the heat of Sarah Clarke’s dim squint. Last time she faced him to ask him why his government had not launched an inquiry into the assassination of Daphne Caruana Galizia yet, Carmelo Abela demurred. Instead he pushed in front of him his assistant Sandro Mangion who told Sarah Clarke something which he later suggested may have been misguided toilet humour and for which he got a whipping from the Parliamentary standards commissioner.

Now we can see why Sandro Mangion needed to step between his frail, bone-rattling, lily-livered Minister and the indomitable ire of Sarah Clarke like a latter day Theseus trying to impress his boyfriend by seeing out the Minotaur.

It now appears that Carmelo Abela only said an inquiry would be held within the timeframe set by the Council of Europe because he couldn’t stand the torment of being asked the question why the government has not done one yet. Perhaps buried somewhere beneath the thick layers of fear, subservience and revolting cowardice, Carmelo Abela’s conscience sees that there is no acceptable alternative to the answer he gave. That an inquiry in this case begs itself.

But Joseph Muscat will not have an independent inquiry in spite of what the rest of the world says. It is impossible not to firm up the conviction that his reluctance comes from the fact that he knows better than anyone, or better than anyone asking for the inquiry to happen in any case, what the likely outcome of that inquiry would be.

Joseph Muscat does not want questions asked to which he knows the answers and which answers he knows to cause him serious political grief.

Carlo Bonini’s book about the assassination of Daphne Caruana Galizia is titled “L’isola assassina”. It is based on his idea that ultimately, beyond the narrow culpability of the hired hands and even the as yet unknown funders of the operation that saw Daphne done away with, responsibility is much wider: it extends to the culture, the politics and the institutions of this country.

And sitting on top of that murderous den is Joseph Muscat. He understands that.

Which is why today on the Times of Malta we had to experience another Orwellian ‘clarification’. If you think you heard Carmelo Abela say we will have an inquiry you need to check your hearing. He said no such thing. He actually said what Joseph Muscat said before: that we won’t have one.

A friend of mine reminded me how Humphrey Appleby would advise his minister on how to get out of a corner such as one Carmelo Abela painted him into. The ‘spokesman’ speaking to Times of Malta recast what was said by transferring the emphasis from the specific instance to the abstract concept, without in any way impairing the conceptual integrity of the theme.

In George Orwell’s Ministry of Truth they were a little less subtle. The memory of Carmelo Abela’s commitment that the inquiry would happen has just been cast into the fire. And if you think you remember it now, it is you who are living a lie.

Where does this leave us? Let’s worry less about us and for a moment think of the torment Joseph Muscat is putting the family of Daphne Caruana Galizia through. All they want, the least they deserve, is to know the truth. But the truth is too dangerous for Joseph Muscat. So they’re being punished merely for asking the question.