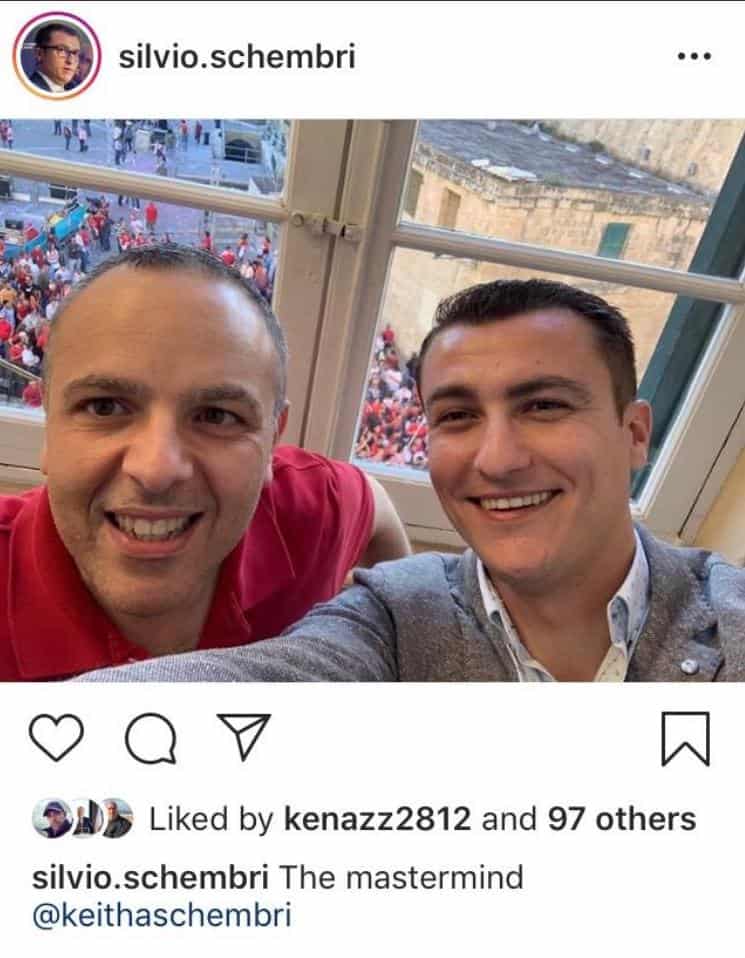 That Silvio Schembri is an over-promoted, unfit for purpose, serial repeating bugler of the Brigata Laburista, utterly bereft of compassion and with the experience of real life of a dynastic monarch crowned in his mother’s womb, is not something we have discovered today.

The detail that he is a bigoted, racist shit may be new but it only serves to fill out the details of his repulsive character like a little moustache under the nose of a pale, angry and scared face.

Ausländer raus, squealed the tinpot Nazi who just two weeks ago was telling the world Malta was the blockchain island, though to be fair to the civilised world no one agreed.

It seems Silvio Schembri thinks that managing the economic impact of the coronavirus will be the last thing he’ll ever do in public life. Surely he does not expect to keep the job of promoting Malta as an investment destination when the virus is overcome. Surely he does not think he or his government will be able to tell anyone Malta is a fantastic place to live in.

Like all populist dog whistles, Silvio Schembri’s arguments that “charity begins at home” and that “foreigners on a work permit who lose their job must leave the country” at face value sound logical. They are designed that way because they are meant to get the sage nods of the blank idiots that support him and the blank idiots who do not support him yet but the paranoia they are feeling now during the worst plague of their lives might encourage them to start.

But his job is to think things through.

Firstly, there really won’t be a way out of Malta after the end of this week.

But job shedding is likely to continue over the weeks ahead especially if instead of helping businesses stay on their feet while the crisis rages on, committing whatever resources are necessary to keep the economy on life support while it goes through this crisis the government continues to behave like a hoarder and keep their stash locked up for whatever day they imagine might better fit the description of rainy than the current deluge we are under. Is he then expecting people to jump into the sea and swim if they lose their job starting Saturday, when the last plane out of Malta would have left?

Secondly, will Silvio Schembri give back to these people the taxes and national insurance contributions they paid while they worked here so they can take that with them as they fuck off back to their country?

Thirdly, will Silvio Schembri complain when all Maltese people now in other countries of the world are deported on the heartless logic of reciprocal treatment?

Those are just challenges to Silvio Schembri’s warped logic taken from our point of view. They are still bigoted questions and come from the same departure point as his: that we’re the centre of the universe. The questions suggest we should not be deporting anyone who has not been brought up on festa and pastizzi in the middle of a global pandemic because we would look bad for doing so, because we’d have to transport them out, because they’ve already paid to stay and we spent the money and because we can expect the world to do unto ours what we’d have done onto theirs.

But all this misses the real issue here. There are few comparable situations in memory that we can draw from to give as the right example. I watched Emanuel Macron’s address to the nation a couple of nights ago and he repeatedly said that ‘we are at war’. Perhaps World War II is indeed the best comparable situation, not because of the extent of untimely loss of life one would certainly hope, but because of the total commitment demanded of the civilian population because unless we all understand we’re all in this together we won’t cross over the finishing line in one piece.

Silvio Schembri has no vision of a shared struggle here. His mind is just too small. He does not see that fighting this battle will be harder if we deny ourselves chunks of the limited resource base we are starting with.

For starters he is taking job losses as a given. That’s cold. Governments of other countries have undertaken to give businesses all the help they need to make sure no one loses their job as we go through this. This is not “charity” as Silvio Schembri calls it or as some Whig politician might have done in Dickensian England of a century and a half ago. This is economic readiness. If businesses are allowed to flounder and close up and their trained human resources shipped out of the country as if they were a problem we have got rid of on a train east, our economic reconstruction and recovery will be so much harder.

Secondly, Silvio Schembri is not realising that he needs all the resources he can get now to help us go through the disease. An unemployed “foreigner” working for a tourist transport company without any business, is an available foot soldier in the effort to distribute food and medicine in a country under lockdown. People will be stuck at home for weeks and venturing to the shops for many vulnerable people will be a great risk. Is there really nothing for these idle resources to do in the biggest logistical crisis since the last air raid of 1943?

What will the lynch-mob do when they come across my wife?

What will they do to the thousands of care workers who keep the elderly at home but are just seen as disease-addled brown people by those inclined to admire Silvio Schembri for his abominable fascism?

What will they do when they come rub shoulders with weary investors who spent their money building a business in Malta but are now going through the doldrums?

How are we going to build and consolidate new bonds of social solidarity as we fill out the inevitable gaps left by public services under extreme strain? How will we get able bodied neighbours who started their life in Serbia or the Philippines but invested their entire existence into joining this community to help out with the elderly or the vulnerable, if we have put them on notice that we’ll throw them into the abyss of exile in a paralysed world if they’re the ones to need a hand?

How can we stand together as a community if our political leaders draw up lines to divide us amongst ourselves?

Previous:All commercial flights to Malta banned from Friday night
Next:Letter to the front